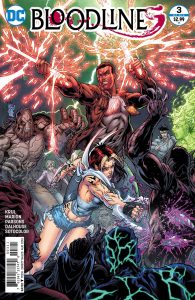 With Rebirth now in full swing, it’s important that we don’t forget about other ongoing titles and mini-series. One in particular that deserves your attention is that of J.T. Krul’s Bloodlines, which I feel is a bit underrated. I’ve enjoyed each issue thus far and continue to be impressed by the artwork by V. Ken Marion,  who is joined by Andrew Dalhouse, a man that is quickly becoming one of my favorite colorists at DC.

This issue doesn’t waste any time showing how people would realistically react to seeing others bestowed with bizarre mutations and abilities. In fact, the first thing we see is a man kill his family that’s been affected by the goings on. It also makes the reader think about what they would do in that situation.

Another positive is that we get to spend ample time with more characters than just Eddie. Not only do we get honest examples of how teenagers would put their powers to use, they also guide us on a path to discovery as we gain more insight into what exactly is affecting the townsfolk – and, believe me, it’s not good. You wouldn’t want to gain superpowers as a result of this.

There are more DC Universe Easter Eggs, especially involving Lex Luthor, which is all well and good. But I can’t help thinking this would exist best unto itself because the rest of the DCU isn’t reacting to these catastrophic events. Well, not for now.

The story is certainly enjoyable and I appreciated getting a deeper look at these characters. With the mini-series now at its halfway point, I want to see the next issue take a few great strides forward.