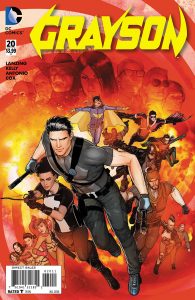 Love it or hate it, the superspy era of Dick Grayson’s history comes to a close with this issue. In it, he engages in his final battle with Doctor Daedalus, who looks like a color swapped Carmen Sandiego, especially when he’s possessing the body of Helena Bertinelli. The relationship between she and Dick really is the core of this installment.

The big throwdown that I spoke of is rather trippy and psychedelic, but you’d probably expect nothing less after traveling the road that started with Batman Incorporated. As they duke it out inside Dick’s noggin, we’re given several nice nods to his history, his legacy, and many identities. I was a huge fan of the Dick Grayson/Batman era and I appreciated the Easter Egg.

Grayson #20 not only neatly wraps up the superspy era, but also provides reasoning as to why most of the world forgets who he is, therefore he can once again wear a mask. But I doubt any of us will complain about the return of Nightwing, which the final page segues into. 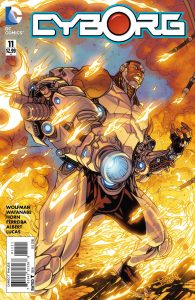 Seriously, that bit of dialogue made my day.

This issue starts a new arc that is completely the brain child of Marv Wolfman, who as of late, stepped up to the task of finishing someone else’s work in progress. If the next few months offer anything close to this, well, Cyborg will be a comic book no DC fan should miss.

In short, Vic unravels an international terrorist attack simultaneously executed in various nations – and at 30,000 feet – without ever leaving his stasis chamber! How cool is that?! As you guessed, he’s undergoing some much needed maintenance and can’t leave his confinement, but you get to see him move through the web, so to speak. This issue was so much fun.

Wolfman has delivered some awesome, outside the box superhero storytelling with this outing. I would love to see the upcoming Cyborg movie take inspiration from this. 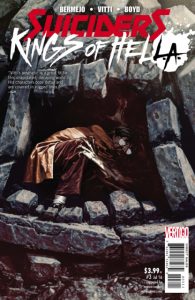 I think my biggest issue with Suiciders: Kings of HELL.A. is that I see it as having no real protagonist. Yes, I feel the story has its bright spots, but for a person to enjoy any story, there has to be someone whom you can either identify with or root for. With everyone bashing each others brains in, I just can’t do that. Before you think I’m a softie, I’ll say that Mayhem is one of my favorite bands. Now judge.

To be honest, I actually did find this to be an improvement over the previous issue, but not by much. I found the time-spanning subplot about the writer to be the most compelling and way more interesting than anything involving the street gangs. Charles Bronson needs to show up to clean house.

Perhaps this will read better as a trade, although it does feel a bit disjointed at times. You may not see threads connect until it’s too late, thereby not giving you the most fluid of reading experiences. If this were a film, I’d say the editing had been a bit choppy and the cuts too hard.