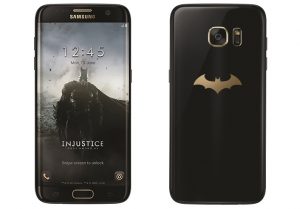 To celebrate the third anniversary of popular mobile game Injustice: Gods Among Us, Samsung have decided to release a Bat-Phone version of their flagship phone, the Samsung S7 Edge.

This special model is jam packed with features which includes “enhanced hardware and software capability” alongside larger battery capacity which should make the mobile gaming experience a bit better, emblazoned with black and gold accents.  In addition, in certain locales, the phone will ship with the VR headset.

The phone is due for release in June in China, Singapore, Korea, Latin America and Russia with Samsung stating that more locations will be announced in due course.