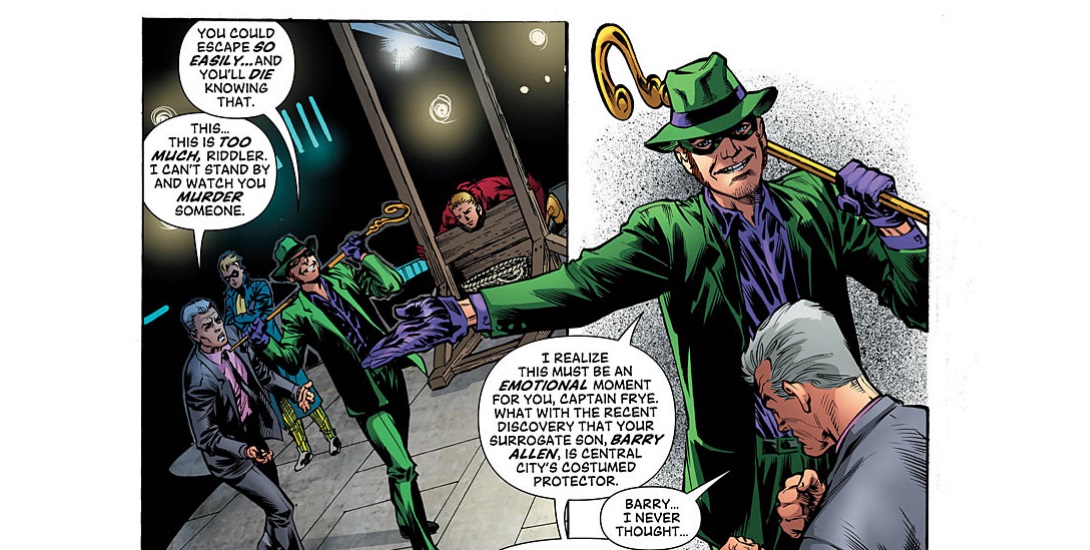 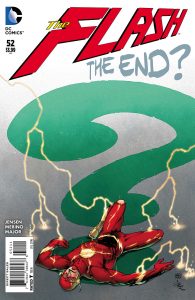 When you think about it, it’s kind of funny we got two Flash finales in the same week: one on TV and one in comics. While Grant Gustin’s version of the character wrapped up his season-long battle with Zoom on Tuesday, the Scarlet Speedster of the printed page has now closed a three issue arc that saw him at odds with none other than The Riddler.

As for Ed Nygma, I’m not sure I’ve seen a villain be this crazy about bombs since Batman Beyond’s Mad Stan. Bad guys using bombs as a threat is nothing new, but The Riddler is someone you expect something so much more cerebral from. Had this been a Trickster or Toyman plot, I’d have accepted it much easier. At least his dialogue was crafted rather well.

This really has been the Week of the Wallys. Pre-Flashpoint Wally West returned in DC Universe: Rebirth #1 and New 52 Wally decides to get proactive with his powers here. We unfortunately don’t see much of him, but rest assured, he makes his cameo count.

Barry Allen, who looks quite majestic in the hands of the talented Jesus Merino and is complemented by great lightning effects, has his symbiosis with the Rogues on full display, something that adds a measure of depth to the book. Most of us know about the Rogues’ “no killing” rule and Riddler’s M.O. is obviously in stark contrast to that. This rare team-up between they and the Flash is pretty much the result of a “this is our city and you’re not going to blow it up” scenario. It’s probably what saved this issue most.

While not perfect or making the best use of Riddler, this was a pretty decent celebration of all things Flash. It definitively capped off The New 52 era for the character and didn’t leave any threads hanging. The incoming Rebirth team truly has a clean slate.