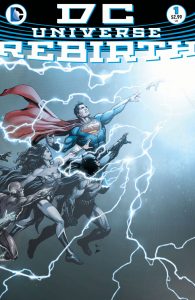 There are many reasons why Geoff Johns is one of my favorite writers, but one of the biggest has to be that he genuinely loves comics and, more specifically, those published by DC. Sure, you could say that applies to anyone in the business, although not many people have the encyclopedic knowledge he possesses or a genuine understanding of so many characters. They absolutely picked the right guy to kickstart the Rebirth relaunch (I’m once again reminding everyone it’s not a reboot) and to stress the importance of superheroes as a source of inspiration. DC Universe: Rebirth #1 may be the shot of optimism in comics you’ve been looking for.

You’ve probably noticed the all-star team of artists listed at the top and it’s quite fitting they were selected to work on this project, as they have all worked on a major storyline with Johns at some point. You probably don’t need me to tell you the visuals are phenomenal from start to finish.

It’s seldom that a big DCU event doesn’t have a Flash at its center and this is no exception, for it sees the return of Pre-Flashpoint Wally West, who acts as a tour guide of sorts. He recaps some of the biggest events in DC history and everything is brilliantly tied together. Wally is the heart of the story and his tether to Barry may very well be the backbone. Perhaps I should stop there before I start comparing other characters to body parts.

The mystery surrounding the revelation that three Jokers apparently exist is explored just a little more but not enough to take anything off the plates of writers of future Bat-books. I still can’t express how highly indifferent I am to this decision, but I guess I’ll just say, “Let’s see where this goes.” As long as Batman doesn’t end up being a secret Hydra agent, I think we’re good.

Now, I don’t want to spoil too much, but by now you likely know about Dr. Manhattan’s involvement if you have internet access. I’m purposefully not elaborating much, although I have to say his inclusion is quite ingenious. If he’s to be an antagonist of sorts, I wonder how anyone can possibly combat him. Needless to say, exciting days lie ahead.

Although this wasn’t a summer-long mini-series like Flashpoint, it certainly did its job. Johns had 80 pages to tell his story and I feel this not only leads into what we can look forward to this summer, but also plants seeds that may not sprout for another few years. Big picture scenarios often lead to very rewarding conclusions and I can’t imagine anyone not wanting to see where it all leads.