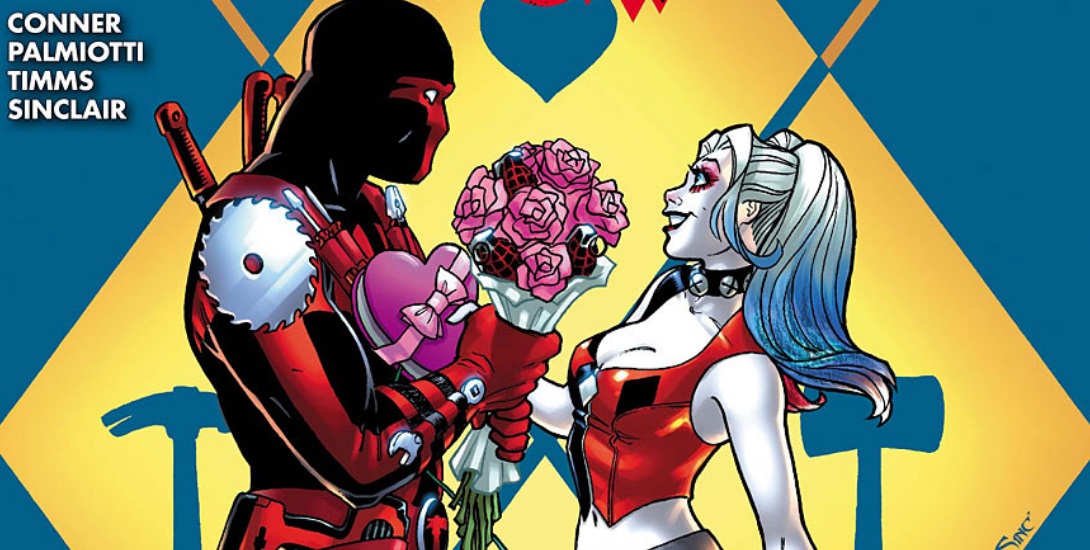 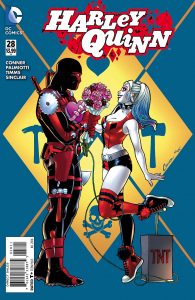 Sometimes it can become easy to get lost in all the fun and mayhem that each issue of Harley Quinn brings and I’m glad that Amanda Conner and Jimmy Palmiotti never forget to remind us that sometimes the stakes need to be raised a bit. This month, they remind us actions have consequences by widening the scope of the series. Law enforcement and politicians exist, therefore the events of this series don’t go unnoticed or remain forgotten.

We pick up where we left off last month with Red Tool – whom they humorously, aggressively remind us is a Deadpool analog – as he attempts to have Harley join him in matrimony. He really is a romantic – in his own special way. And is it just me or are ball gags becoming a trend in Harley Quinn comics? I’ll let you wrap your lips around that one as we proceed.

John Timms and his pencils bring the insanity to life as few others can. After a hilarious dream sequence, we encounter a few twists and turns that show you can’t judge a parody character by his cover. To be quite honest, I think Red Tool is a welcome addition as a recurring character but as one we see now and then. I just hope he and Harley remain friends and nothing more. You probably don’t need me to once again say that I’m not a “shipper.” Ugh. I used the word “shipper.”

You will want to give this issue a close look, for it may be a turning point. It sets up what may be an invaluable alliance between Harley and the new chief of police as the mayor is left fuming. We really need to keep an eye on the latter.

I’m still wondering what to make of the final page. One thing is for certain: the scatapult is primed and aimed squarely at a giant fan. Expect it to deploy in kind next month.