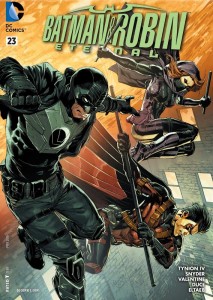 Last week’s plan comes to fruition in the pages of Batman & Robin Eternal #23. The team has huddled together, splitting up their duties all over the world and walk through a cool door to get there. We also get to catch up with Scarecrow, as the team uses his “talents” to create a cure for the kids caught under Mother’s spell. It all builds to Dick’s arrival near her headquarters, where he is on his own.

In my review of last week’s issue, I said there was a lot of talking and it was plenty of good dialogue. There’s less dialogue in issue #23, but it’s just not as effective. While the story seems to fly by, I had to do a lot of rereading to really understand what was going on. Not to mention, this Midnighter guy pops up and it seems as if we’re supposed to know who he is (if any of you can educate me, I’d appreciate it).

It’s not all bad though. Genevieve Valentine’s pacing is really tight and the story moves along at an exciting pace. In an already epic tale, we have so many characters popping up in this issue alone. I was especially pleased to see Batgirl make an appearance, and Spoiler alert, Stephanie Brown had some really cool moments. Another strength, as always, is in the art. Go back to nearly any Eternal issue I’ve reviewed and you’ll find positive notes on the look of the book. This week’s issue from Fernando Blanco, who we’ve seen before, lives up to that reliability.

An action-packed issue that is taking us to a massive finale we have come to expect, has a few hiccups in how it gets us there, but the art and characters pull us through.