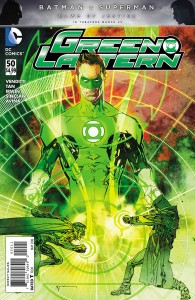 Time sure does fly. It has been nearly five years since the launch of The New 52, an initiative that sparked a variety of reactions from comic book fans everywhere. I personally didn’t mind it because comic continuity always has a way of resetting itself – people just tend to conveniently forget that.

Several titles have continuously endured during that time frame and the first to achieve the milestone of fifty issues is that of Green Lantern. The last time a flagship GL title hit that number, we were in the thick of Blackest Night. This time, however, things get a little more intimate.

This issue kind of plays out like a Mirror Match in a fighting game, only with a bit more substance courtesy of Robert Venditti: we have The New 52’s Hal Jordan duking it out with Hal/Parallax from another universe. The latter gentleman is quite reflective, as he reminisces of the Coast City he lost on his Earth. To prevent the loss of this one, he feels that he must take down his doppelganger, whom he fears will make the same mistakes and fail to prevent the destruction of his home city.

Our Hal gets a bit of downtime with his family, which is always nice to see, before Hal/Parallax sticks his ring in. What ensues is a spectacular battle brought to life by the polished artwork of Billy Tan (with an assist by Vincente Cifuentes). Some people have criticized Tan’s artwork on this run, but I’ve always liked it.

The unfortunate thing about the fight is that it reaches no real conclusion, much like nine out of ten main events on WWE Monday Night Raw. Being that this is an anniversary issue and bears a cover price of $4.99, something a bit more conclusive should have been provided.

Well, we do have two more issues to go before “Rebirth” kicks off. Perhaps we will see more of Hal/Parallax as well as the change our Hal goes through near the end of this issue.