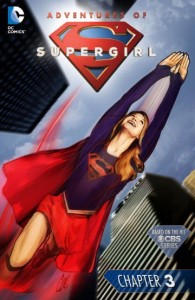 The third chapter of Adventures of Supergirl is now available digitally and, much like the previous two installments, is well worth the time and 99 cent commitment for TV and comic book fans alike.

From the opening panels, you will get the idea this is truly a visual feast. Bengal consistently ups his game and those images really pop thanks to his use of vibrant colors

What writer Sterling Gates did best in this chapter was showing the “human” side of Rampage and fleshing out her background. Much like the TV show, this comic series does a great job of showing there is more than meets the eye when it comes to certain characters. As an added bonus, we get some insight into her time at Fort Rozz.

Something else that I found to be cool was seeing Alex rescue Supergirl. While I won’t divulge specifics, we can probably agree that it can be fun to see roles reversed in that manner. Gates was able to make the sisterly dynamic found in Alex and Supergirl’s relationship mirror that in Rampage and Moyer’s, something that didn’t seem lost on our heroine.

I got the feeling that the Rampage story has been tied up – at least for now – and a new threat will be found in Chapter 4. Hopefully we get to see more villains that the TV series didn’t get around to using. Be sure to check back in two weeks.