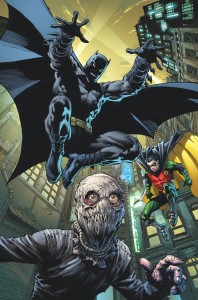 Batman & Robin Eternal starts strong this week. The cover promises a flashback with the Scarecrow (the best part of this title), and it doesn’t lead us astray. We catch up with the Dynamic Duo on a rooftop with the villain in Cairo. Batman stand back and allows Robin to prove himself by catching Scarecrow…which he does. Some kind words are shared and Robin is sent off for Batman to clean up. Except he’s not cleaning up, and is keeping a deadly secret from the Boy Wonder…which connects to the first issue of this title.

In the present day, we pick up with Red Robin, Red Hood, Azrael and St. Dumas. Issue #15 left off with a great moment of Jason Todd reliving his “A Death in the Family” moment where Joker beat him with a crowbar. While he’s fighting off that “trip,” Tim Drake teams with Azrael to take down the order, and manages to escape with Jason to meet up with the rest of the team.

issue #16 is book-ended with the flashback, allowing it to start and end strong. Not to mention, we get a great connection with the first issue. However, everything in between just falls flat with me. I understand Jason needs to keep his fear, Tim needs to escape and Azrael needs his turn as a good guy. Just like I’ve said with the past few issues, I just don’t care. Azrael just isn’t a character I care for. Tim and Jason are okay with what’s done with them, but it’s the flashbacks that make this issue worth reading. That being said, this may be the first issue that has three artists contributing, which isn’t a good sign to me. The end result? Meh. I’m constantly singing the praises for Eternal‘s artists but this week isn’t much of a standout.

Overall, a somewhat forgettable issue that is saved by the Dynamic Duo and Scarecrow.

Check Out Cat Staggs’ Cover For Adventures of Supergirl #1