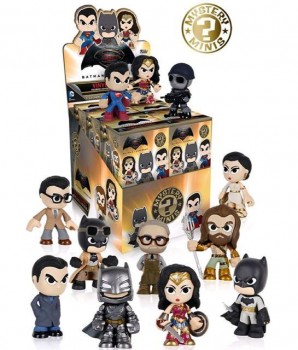 Pop Vinyl makers Funko have released an image of their upcoming mystery minis wave that is based on the forthcoming Batman v Superman: Dawn of Justice.

Whilst we have already seen Aquaman’s look in a preview of the full-size Pop Vinyl figure, it’s nice to finally see what Alfred will look like during the film. He definitely seems to have a handyman vibe with that long brown apron, which is no doubt full of tools. It’s also interesting to see a Princess Diana figure included which seems to point to us visiting Themyscira at some point during the movie.

Sadly, no release date has been given for the mystery minis, but be sure to expect them around the release of the movie.