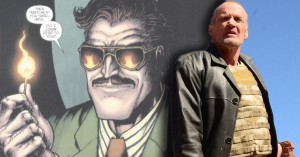 Matches Malone is Batman’s longtime favored criminal alter-ego, that he lifted whole sale off an arsonist that had apparently died, using it to establish himself into the criminal underworld for information. Of course on Gotham, Bruce is still young and Matches is still around, having been named dropped previously. Comicbook.com has announced that he’ll be played by Michael Bowen, known from his work on Breaking Bad, as well as Lost. Matches is definitely a more fleshed out character in this take on the character, according to the character description.

One of Gotham’s deadliest killers, Matches Malone is a weathered, philosophical hitman who may be the triggerman behind one of the most important crimes in Gotham’s history.

Now that’s a massive change, because they’re implying he might be the gunman who killed the Waynes that night in Crime Alley, which is a big liberty from the traditional Joe Chill, as well as adding the uncomfortable notion that Bruce uses his parents’ killer as a future alias. In the second half of Gotham, whether or not Matches did kill Thomas and Martha Wayne, as well being a top notch assassin, will certainly see his importance rise exponentially. The show returns February 29th, next year.