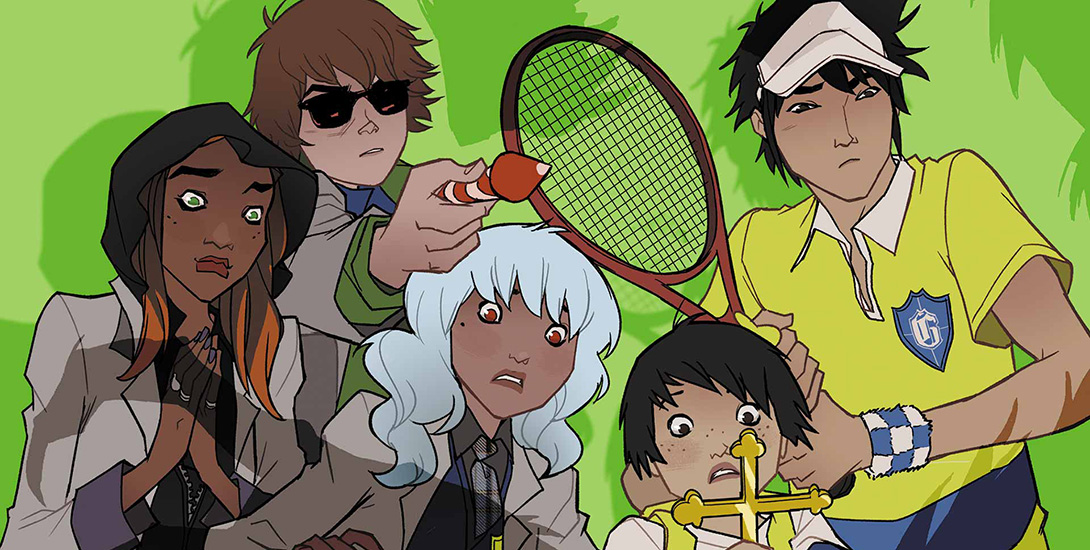 So. Not only is there a Were-Bat roaming the halls of Gotham Academy, there’s also a Werewolf. And lucky for us, we finally learn why, and how, in this issue. We also get more details about Olive’s so-called scholarship to the school and insight into her odd, incendiary abilities. These facts alone would make this issue well worth your time, but there’s so much more.

This 9th issue of Gotham Academy, subtitled, Calamity, opens up with a pair of menacing werewolf eyes fixed on Olive as she wanders the woods alone after dark. Luckily, her sidekick, Maps, along with their regular tight-knit group of friends, find her there and ask for help in solving the monster mystery from the last issue. 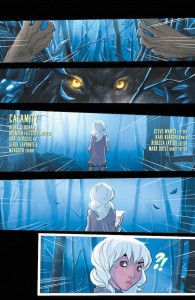 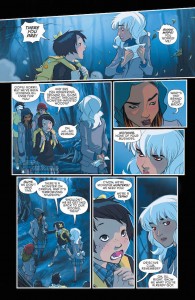 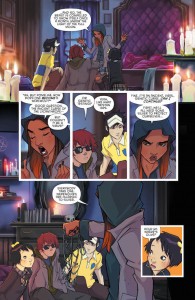 After some convincing from the group, Olive agrees, prompting them to go in search of clues in the cemetery where Tristan was last attacked. Once there, it doesn’t take long before Pomeline discovers a clump of strange hair beside a headstone. Colton readily offers to analyze the hair in a secret lab he has created inside a camper hidden in the woods. When his test reveals the clump to indeed be wolf’s hair, Pomeline distributes silver necklaces to everyone (except Olive who has suddenly gone missing) as an amulet for their protection. From there, the group splits up and Maps goes in search of Olive.

Meanwhile, Olive has returned across campus to her room where she is first startled by Maps’ roommate, Katherine, snooping around in the dark and then by an envelope swooshing under the door titled, Silverlocke, Olive – Classified. The contents of the envelope turn out to be her “secret” school admission papers. Confused by the papers, Olive visits Professor Strange where she learns that she is not at Gotham Academy on a Bruce Wayne scholarship, as she was previously informed, but is instead there to be watched over by Professor Hammerhead because of her mother’s past issues.

Next, we follow Olive and Maps as they proceed to Professor Langstrom’s laboratory to talk with Tristan where they not only learn that Batman was responsible for bringing Tristan to the school in hopes of Professor Milo curing him from his genetic Were-bat problem, but that Milo, instead of curing him, used Tristan’s DNA to spread the genetic problem to others. And now, Professor Langstrom is racing against the clock to discover a cure to reverse the disorder.

No sooner are these bombshells revealed, than Olive and Tristan are attacked by the werewolf crashing through the laboratory window. During the chaos, the group re-assembles and realizes the wolf’s identity by its clothing to be Coach Humphreys.  After fending off the attack, they have an idea for a clever wolf trap to catch the beast (Coach Humphreys) before he does anyone harm. With their wolf deterring accessories in hand: wolfsbane, garlic and silver-based spray paint, they devise a plan to lure the wolf in, net him from above, whack him with a golf club until unconscious and use Pomeline’s charms to return him to human form.

With Olive as a lively target, it doesn’t take long before the beast shows himself again. But strangely enough, so does the creepy, hooded woman figure from the close of the last issue. Besides being physically present, the hooded figure is also mentally present inside Olive’s head; speaking to her and disrupting her thoughts by inducing a trance-like hypnosis to encourage the use of her inherent fire abilities (none of which Olive ever remembers using). 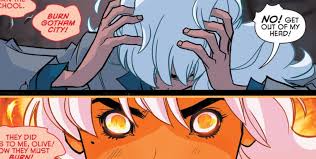 After capturing the wolf (and rescuing Coach Humphreys from himself), the issue ends with Olive and Pomeline back in the school’s arts center facing yet another unexpected appearance of the mysterious woman figure. When Pomeline surprisingly identifies her as, Calamity, it’s the perfect lead-in to next month’s issue.

Because of all the moving pieces, several information revelations and the focused storyline, I really enjoyed this issue. Give it a try, I think you will too.