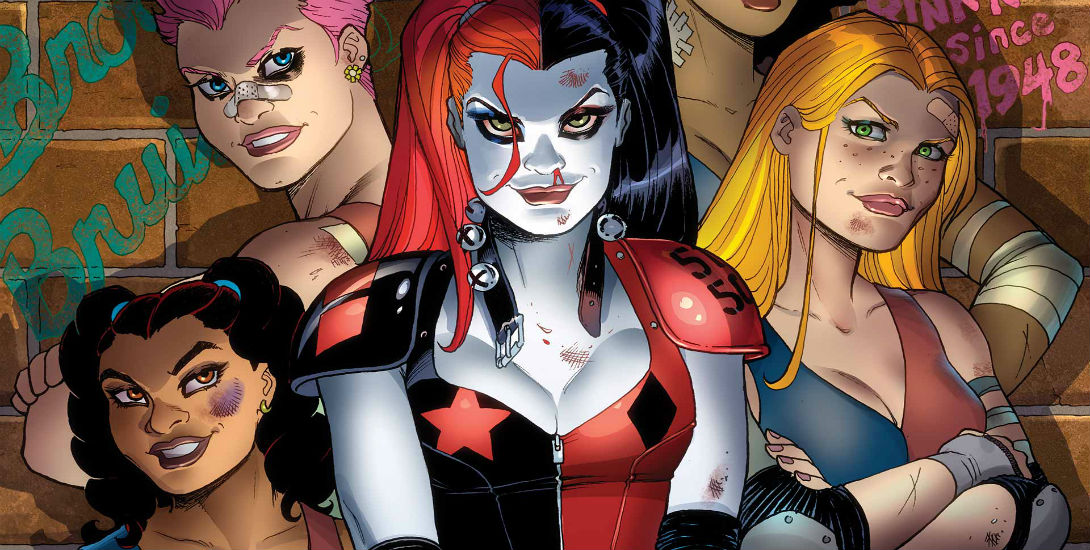 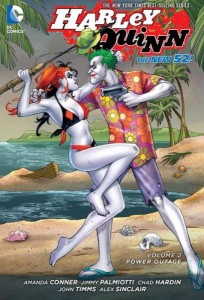 Those familiar with my reviews may remember that while I’m not the biggest fan of the character of Harley Quinn per se, I immensely enjoy the current series written by Amanda Conner and Jimmy Palmiotti. Much like the previous volume, this entry is also a tremendously fun read and is chock full of great dialogue. The writing team truly gets Harley Quinn. Chad Hardin returns as artist for the bulk of the book, although many other artists contributed as well. This may set off a warning bell in your head, but rest assured that the quality and look of the artwork is consistent and the switches between pencilers never seems jarring; it’s relatively seamless for the most part.

While the stories that start off the book are rather entertaining – which include Harley getting kidnapped by a stalker and her participating in a brutal skate club – it’s the unexpected cosmic shift that really becomes the highlight of this volume. It leads to a most amusing team-up with Power Girl, who is amnesiac and successfully convinced by Harley that they are a superhero duo. A squabble with Clock King and Sportsmaster sees the girls transported to another universe where they must go up against “Manos” (a parody of Thanos). There’s more to the team-up, but I don’t want to elaborate much as to save you some surprise. It’s also worth noting that the book gets very meta-textual at times. Those hoping for the return of Harley’s wonderfully diverse supporting cast will be pleased to know they’ve returned, although most of their roles seemed rather limited. Again, the Power Girl arc is the real draw here.

Several done-in-one stories are included, the first of which is the Futures End tie-in. It joins Ms. Quinn five years into the future and sees her marooned on a tropical island, which is occupied by some natives, let’s call them. Coincidentally, the Joker is also living on the island and has been adopted as their god-king. It leads to a wedding ceremony between the two that is anything but romantic. It wasn’t my favorite chapter in the book, but I enjoyed it much more than I thought I would.

Another special included is Harley Quinn Invades Comic-Con International San Diego, which gets so meta that I doubt it can even be considered canonical. I think DC just let Conner and Palmiotti throw caution to the wind to create a fun comic book that can be enjoyed as a standalone. It sees Harley attend SDCC and attempt to get her comic book, “Hurl Girl,” seen by the likes of Jim Lee and Dan DiDio – now you know why this issue can’t be canonical. One of the moments that will no doubt have people talking is just what happened between Harley and a room full of Joker cosplayers. It’s left to your imagination, though I can’t blame you if your mind goes straight to the gutter. She also goes out with a group of Harley cosplayers. All I will say is that they invite her to partake in some mayhem and she takes them literally. Enjoy. 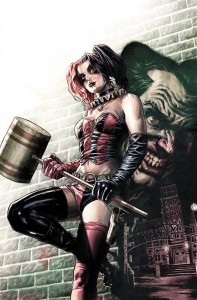 The book closes with an excerpt from Secret Origins #4, which tells the New 52 origin of Harley Quinn. While some familiar beats are hit, it’s a quite different telling of her beginnings than what you may be used to. However, please do note that it’s not so far out there that you will throw the book down in frustration (though a staunch purist or two probably will).

If this glowing review didn’t spell it out, I highly recommend this book for Harley Quinn fans everywhere or people who just want to read a fun comic. I’m already counting down the days until I can read and hopefully review the third volume. Score: 9.5/10