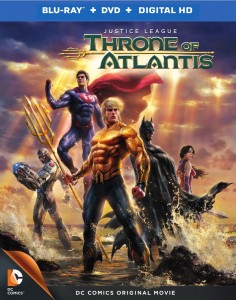 I’ve always been a huge fan of DC/ WB Animation. There’s no exaggeration when I say that my anticipation for animated superhero films rivals that of its live action brethren. The film currently being examined, Justice League: Throne of Atlantis, is no exception.

Throne of Atlantis is a loose adaptation of the comic book story arc of the same name. It does hit many of the major beats of its source material, yet presents many fresh elements as well. This movie is just as much of an origin story for Arthur Curry/ Aquaman as it is an exploration of the source material. Yes, that’s one of this adaptation’s biggest departures: this is the Justice League’s first encounter with Aquaman in the “New 52” continuity of this animated line, as opposed to having him as an established member of the team.

The film that preceded this, Justice League: War, was a bit divisive (I liked it), though I do understand some complaints about it. Despite my enjoyment, I admit it was a bit heavy on action and light on story. Then again, so was the comic it was based on. Throne of Atlantis doesn’t have the same problem. Director Ethan Spaulding choreographs the action well and when it is presented, it counts. Heath Corson’s love for DC’s pantheon of heroes really shines through his script and every character is portrayed in the right light and well utilized. I must also applaud Phil Bourassa’s character designs; I really dig Wonder Woman’s costume.

Speaking of those heroes, I’d be remiss if I failed to acknowledge the wonderful voice cast assembled by Andrea Romano. Jason O’Mara returns as Batman and continues to grow into the role; I feel he improves each time he lends his pipes to the Dark Knight. I feel Chris Gorham’s The Flash, Shemar Moore’s Cyborg, and Sean Astin’s Shazam are all fine performances, but don’t steal the show. Another return marked in this entry is that of Nathan Fillion as Green Lantern. He may have missed War, but fans will be happy to see him once again voice Hal Jordan, a role that fits him like a glove. Newcomers include Jerry O’Connell as a delightful Superman, Rosario Dawson as a strong and regal Wonder Woman, and Matt Lanter as Aquaman. More on him later.

As for the villains, the one who gets the most screen time is Orm/ Oceanmaster. Sam Witwer really frees his inner thespian with his performance. Some may think he pours it on a little too much, but I think it was appropriate when embodying a royal zealot. Orm is rather Machiavellian and usurps the throne with his own version of the Reichstag fire. I’ll say no more when it comes to that as not to spoil much. His war on the surface world is merciless, though the amount of devastation is nowhere near as high as what was seen in the comic. It’s another deviation, though I wonder if the producers wanted to avoid similar criticisms that were leveled at Man of Steel or if they were just trying not to earn an R rating (the film is rather violent as it is and definitely not for kids). Harry Lennix joins him as the vile Black Manta and does a fine job despite being a bit underutilized.

Before I wrap up, it’s time to address the man at the center of all this – Aquaman! I’m thrilled to say that he’s portrayed with all the awesomeness and bad assery the character deserves. Until a live action film starring Jason Momoa gets here, feel free to pop in this movie to silence any Aquaman naysayers. This movie features iconic scenes ripped from the comics and gives several OUTRAGEOUS nods to Batman: The Brave and the Bold. Matt Lanter definitely has to be one of the better voice actors in the character’s history.

It’s also worth mentioning that you should stick around after the credits because we do get a tease for the next animated Justice League movie (which will likely arrive in early 2016). It’s not like the one at the end of War that made us have an inkling that Throne of Atlantis was up next. No, this one is open to more interpretation, so let the speculation begin. In the meantime, DC fans are well advised to add this to their collection. Score: 8/10 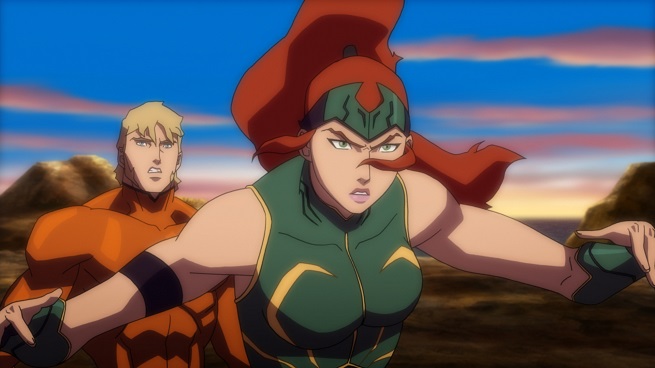