The last big rumor regarding the Batman v. Superman Dawn of Justice teaser trailer claim that it was going to premiere with The Hobbit: The Battle of Five Armies last month. Obviously, that rumor never came to fruition. This week, however, we’ve got another big rumor claiming that the teaser trailer isn’t too far off.

If we are to believe El Mayimbe, that means that the BvS teaser trailer is about a month away as Jupiter Ascending is set for release on February 6, 2015.

El Mayimbe of the Latino Review is known for a lot of scoops. His track record has been pretty spotty in the past. Sometimes, he’s right and other times, he’s way off. However, his latest scoop actually has some grounding to it.

Jupiter Ascending is the Wachowskis’ next big outing. It looks to be a massive space epic, costing around $175 million. That’s a lot of money.Unfortunately, the Wachowskis’ aren’t quite the cash grab that they used to be, so it stands to reason that anybody involved is a little nervous investing that much money into a project that may not see as much profit. Cloud Atlas just barely made its money back internationally. If we were to believe El Mayimbe, it looks like WB has taken out some insurance by attaching to it what is likely the most anticipated trailer right now. Of course, they’re banking on the fact that Batfans will make the trek out to theatres to catch the first glimpse of live-action Bats and Supes. Jupiter Ascending has piqued my interested, but by the time I decide to actually go out to the movies, the trailer would likely have already been released online. It’s a gamble, yes, but there isn’t too much risk involved. 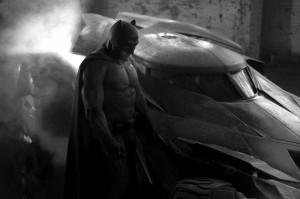 El Mayimbe’s lovely Twitter followers would later corroborate his claim by providing a link to a website that compiles release dates for various media such as trailers, theatrical releases, and home media. The website known as the Projection List claims that BvS is a projected trailer attached to Jupiter Ascending along with WB properties, The Man of U.N.C.L.E. and Magic Mike XXL. Unfortunately, this information cannot be taken conclusively as the website is not affiliated with any official sources. However, it’s still a good sign.

Though I couldn’t care less which movie the trailer is attached to, I am excited to hear that it could be less than a month away. This is history, folks. The first appearance of a live-action Trinity.

Don’t get too excited though, as it has not been confirmed. So, in case of faulty rumors, break glass for salt.

Will you be catching Jupiter Ascending? If no, does the prospect of a BvS teaser trailer enticing you to see it?