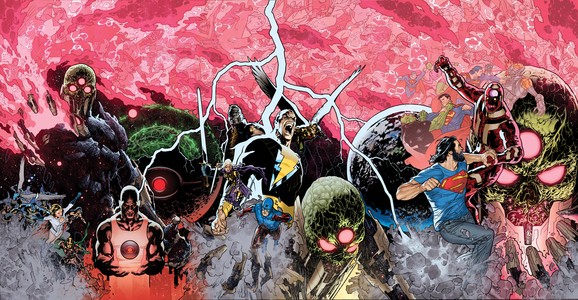 In recent weeks, we at DKN have been talking a lot about Convergence, DC’s mega event that kicks off April 1, 2015. Consisting of a weekly series that will run throughout April and May while having forty two-part mini-series orbiting it, it will see many alternate DC timelines forced to do battle with each other.

But what to read in the meanwhile?

DC has you covered. The New 52: Futures End paves the way for Convergence. Just what is going on in that weekly title? Here’s a synopsis provided by DC:

Thirty-Five years from now, Brother Eye, the all-seeing artificial intelligence designed to protect and serve humanity, has turned on its makers. Nearly all life on Earth has been eradicated, leaving only the cybernetically enslaved superheroes Brother Eye has converted into its unstoppable executioners. Led by the Batman—the man who helped create Brother Eye—a small team of heroes fights on. Their last-ditch plan: send a hero back to the past to prevent Brother Eye from ever being created.

Terry McGinnis (aka Batman Beyond) only made it thirty years back during his timestream jump. The technological apocalypse was already in motion and the Earth has become home to millions of refugees from Earth 2.

If that left you assuming that you should also be reading the weekly series Earth 2: World’s End and the monthly title Earth 2, you would be correct. While I’m sure that Convergence will be friendly toward new readers, it doesn’t hurt to enrich your experience.

The first trade paperback, The New 52: Futures End Vol. 1 (collecting issues 0-17), is now available wherever books are sold. As an added bonus, I’ll throw in some videos DC has provided that aim to catch you up on the major plot points.