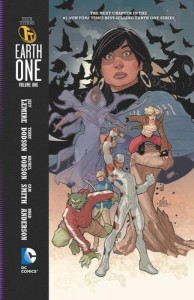 When DC rolled out the “Earth One” line of books several years ago, they did it with the intention of giving readers accessible stories that anyone could jump into that were published as original graphic novels instead of monthlies. The universe next door has treated us to tales featuring heroes we know with just the right balance of familiarity and reinterpretation. Superman and Batman have already received this treatment, with Wonder Woman likely getting hers later in 2015. As the line expanded, I expected to see someone like Green Lantern (which I still hope for) or The Flash get their own installment. Imagine my surprise when we learned that a Teen Titans book would get here before we rounded out the Trinity. Despite the fact that I’m not really a Teen Titans fan, I eagerly anticipated this book simply because I love the “Earth One” brand.

Did this book deliver? You bet it did! Jeff Lemire, who has quickly risen to the rank of being one of DC’s premier writers, reinvented the Titans concept and did a spectacular job of it. Rachel and Terry Dodson provided art that is very different from what we’ve come to expect from the “Earth One” line, but it fits the tone of the book rather well.

Lemire wrote an ensemble of teenagers who are believable and not sugar-coated. This also isn’t a costumed team out looking for adventure – they’re plainly clothed adolescents who are brought together when they start to unravel a conspiracy that they are inextricably linked to. Yes, their origins are tied together and a bit different than what you may have expected. Their journey to discovery is so sharply written and engaging that you truly feel as though you are taking the trek with them. You won’t be able to put down this book and will likely finish it in one sitting. 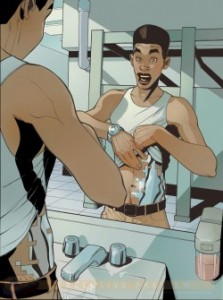 One thing you should know about this interpretation is that there are no adult superheroes yet. It allows the characters to really stand on their own. On that note, no sidekicks are on this team. Familiar characters such as Cyborg, Changeling, Terra, and Raven play big parts, with Starfire being a mysterious linchpin. It’s understandable why Lemire neglected to include the likes of Robin, Aqualad, and Wonder Girl, lest he have to mention their mentors and complicate things. Although things may be more different than what you’re used to, at times it seems like a love letter to the Wolfman-Perez era (the book is actually dedicated to those two).

There’s only one thing that I didn’t like about this book: the portrayal of Slade Wilson/ Deathstroke. He’s been a very popular character lately, appearing in various forms of media. Some have been very good (Arrow, Batman: Arkham Origins) and some haven’t been all that great (Son of Batman). This particular incarnation is not only my least favorite version of Deathstroke, but also dons what I believe is the worst costume he’s ever worn. Despite this gripe of mine, it wasn’t enough to not make me love this book.

I won’t mention any specifics about the book’s ending, but I will say that it ends on more of a cliffhanger than we’re used to seeing in “Earth One” titles; it will have you counting the days until a Volume 2 is released (I’d assume two years). Thanks go to Lemire and company for another stellar reimagining and entry in the “Earth One” line of books. I hope that DC expands this universe to its full potential. Score: 8.5/10