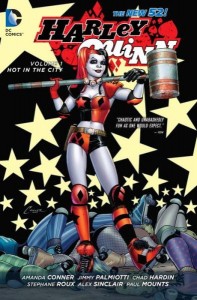 In Batman’s 75 years of existence, not every character introduced in the pages of his comic books has caught on. What’s more remarkable is when a character introduced outside of the printed pages finds an audience. One such example is Harley Quinn. She was introduced over 20 years ago on Batman: The Animated Series and her popularity continues to grow. The first collection of her solo adventures in The New 52 is the subject of today’s review and it was one heck of a ride.

Scribes Jimmy Palmiotti and Amanda Conner bring Harley to life in ways few writers other than her creator, Paul Dini, can. The book they’ve concocted is fun, whimsical, violent, and loaded with irreverent humor and frenetic action. They’ve also wisely created a supporting cast that complements her rather well. It’s all brought to life by the robust artwork of Chad Hardin and Stephane Roux.

The book starts off with the the star-studded zero issue, featuring art from such greats as Jim Lee, Tony Daniel, Bruce Timm, and Adam Hughes. This portion is essentially a meta-textual story that sees Harley choose the artist for her comic book in a dream sequence. Basically, each artist gets one page to contribute before she finally decides that Chad Hardin is the way to go. Not only that, she communicates with the book’s writers! When she awakens, she learns that she has inherited a building in New York’s Coney Island area. Joining her on her adventure is a stuffed beaver friend that only she can hear.

On her way to Coney Island, she “rescues” a dog. In fact, a good portion of the books portrays her as a lover of the furry kind and an animal rights crusader. I found this a bit odd because she associated herself with the Joker for so long and I’m sure he’s killed his share of four-legged friends in addition to a multitude of humans. Despite my enjoyment of this book, I couldn’t ignore the fact that we’re essentially sympathizing for a villain and Batman wouldn’t approve of much of anything she does.

The apartment building she has inherited is filled with sideshow freaks, chief among which is a little person named Big Tony, who looks like a shorter version of Nathan Explosion. She must find a way to pay the building’s bills and takes a job as a psychiatrist at a senior home. In addition to that, she lands a gig as a roller derby girl. To complicate matters, someone has put out a hit on her! She takes down one would be assassin after another throughout the story. 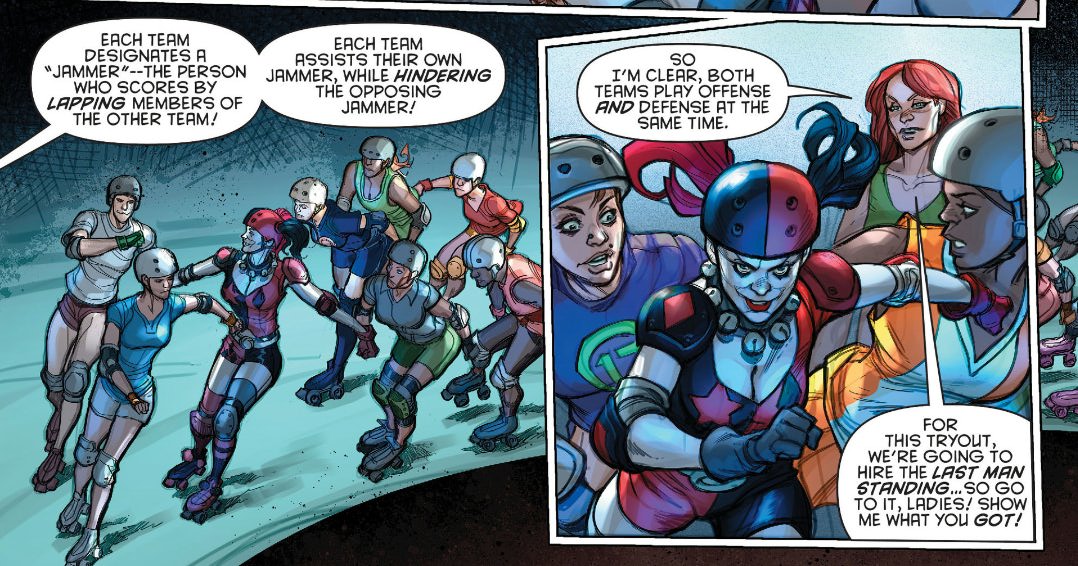 Several characters pop in to share the spotlight. The most notorious would have to be Poison Ivy, who first stops by to partake in some hilarious hijinx. Fans of the Harley-Ivy friendship should be thrilled to know that Ivy ends up playing a big part in the story. Geriatric commando Syborg also drags Harley into an amusing side story. The subplots luckily don’t detract from the main plot and, believe me, I didn’t see the twist concerning the identity of who put a price on Harley’s head coming.

The final chapter wraps up some of the minor plot points. She finally gets to derby, but gets kicked out of the league. We get a teaser for an underground Skate Club, so we’ll have to see where that goes in the future. I won’t spoil all the details of the “scatapult” for you, which needs to be seen to be believed. Before closing, a new threat presents itself. Hey, we need a reason to come back, right?

Supplemental material includes: variant and reprint cover galleries and a look at some sketch artwork.

Take it from someone who admittedly isn’t much of a Harley Quinn fan: I enjoyed this book much more than I thought I would. If I could appreciate it this much, I can only imagine how much genuine fans of the character must love it. I’m already looking forward to reading the next volume. Score: 8.5/10