In media outside of comic books, one of the largest disappointments in recent times was the cancellation of Young Justice. Cartoon Network simply didn’t understand just how fantastic a show they had on their hands. Or maybe they did and didn’t care. Not if we were to believe Paul Dini, at least. It was probably the best comic book cartoon to come out in recent years due its relatable characters, intricate plot, and sophisticated writing that never condescended to anybody. It was a show that worked for kids and adults and I still grieve when I think about it.

Thankfully, Warner Bros. at least has some sort of clue about its popularity. It looks like they’re releasing the second season of Young Justice, subtitled Invasion, for a November 18th Blu-ray release. Over the course of its run, the series has seen DVD release, but always in volumes and never as an entire season. Thankfully, last August saw the Blu-ray release of the first season and now the second season comes in just a few weeks to complete our collections.

This is a press release from WB:

Taking this release to another level, Warner Archive Collection has added an exclusive commentary track on the series finale episodes “Summit” and “Endgame” featuring creators Greg Weisman and Brandon Vietti along with voice actors Jason Spisak (Kid Flash) and Stephanie Lemelin (Artemis). The package also includes a Behind the Scenes featurette.

Young Justice: Invasion finds our heroes five years into the future – and a lot can change in five years, as our super heroes are about to find out. First, there’s some new residents to be found at Mount Justice: new team leader Nightwing, Wondergirl, Blue Beetle, Batgirl, Bumblebee and Beast Boy. And Young Justice will need all the help it can get as an alien presence has infiltrated Earth, while certain members of the Justice League are forced to stand trial at the criminal hearing off-world. Watch as The Reach, spearheaded by the quick-talking Ambassador and backed by the muscle of Black Beetle, manipulates a trusting public while maintaining its shadowy maneuvering with The Light. This is a grand 20-episode adventure as the risks have never been greater and the conflicts never so far-reaching – and the epic finale will shatter everything you know! 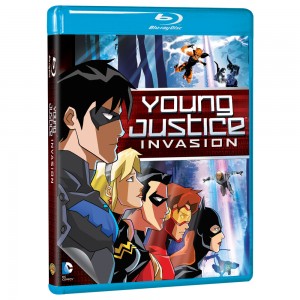 I’m excited, are you? Pick it up on November 18th.