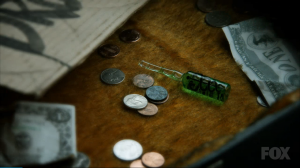 Those of you who complained about the pilot, take note: Gotham can in fact allude to villains well. Take this week’s episode, “Viper,” for example. In it, we got a look at the title drug, which grants its users an incredible boost in strength at the expense of their bone density and eventually their lives. We also learned that Viper was only a prototype for a more advanced version– Venom. Now, as fellow Bat-fans I probably don’t need to tell you this, but Venom is most famous as the drug that powers the villainous Bane, breaker of the Bat in Knightfall. Showing us Viper/referring to Venom in this episode, thus, was a great way for this show to give us a glimpse at Bane (or at least his powers) while still acknowledging that Bane himself was probably still trapped in a prison in Santa Prisca at the time when the episode was set.

Another element that “Viper” delivers on is little Bruce’s detective skills. Even though he’s still young, we see shades of the future Batman here as Bruce struggles to find explanation for Wayne Enterprises’ shady dealings. It’s also nice seeing Alfred finally cave in and help “Master Bruce” with his detective work– by the end of the episode, Alfred has moved from staunchly opposed to Bruce’s delving into Wayne Ent. and the Wayne murder case to sitting down beside the boy and digging through files himself alongside him.

On a final note, it’s also good to see Fish Mooney’s plot to overthrow Falcone developing (finally in a coherent manner, as last week it felt simply mysterious for mystery’s sake alone.) I’m interested to see if Liza actually plays her part as intended, or if she falls victim to Falcone’s charm and power.

Overall, this episode gave us quite a bit (and proved that the show is capable of good foreshadowing) though it features arguably one of Gotham‘s less memorable villains.

Description For ‘Gotham’ S1E8: ‘The Mask’