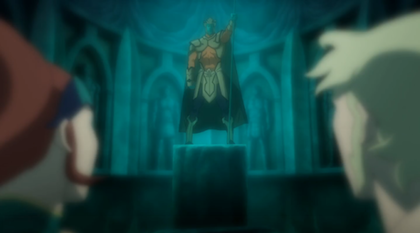 Justice League: Throne of Atlantis, a film from Warner Bros. Animation, has received an exciting debut trailer that showcases dangerous discord between the underwater world of Atlantis and the surface world of Earth.  Aquaman must intervene and join forces with the Justice League if he hopes to end the conflict between Earth and Atlantis.

Here’s a synopsis, as presented by Newsarama:

As Orm and Black Manta make their move against the surface world after the battle with Apokolips forces in Justice League War had deadly consequences for Atlantis, the queen of the lost underwater civilization searches for her other son, Orm’s half brother Arthur. Living on the surface world with powers he doesn’t understand, Arthur Curry steps into his destiny as Aquaman, teaming with the Justice League to save and unite all people of the world.

Check out the colorful trailer:

Justice League: Throne of Atlantis, which is very much an Aquaman-centric/origins story film (despite its title), will be released on Blu-ray and Digital Download in Spring 2015.