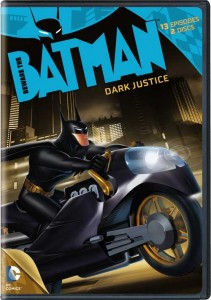 Fans of Beware the Batman rejoice! The short-lived Cartoon Network series is not only coming back to life this summer on Toonami, but also getting a second DVD/Blu-Ray release in the fall! Beware the Batman‘s first volume, Shadows of Gotham, hit shelves back in February and contained the first 13 episodes of the show’s first and only season.

The second volume will be called Dark Justice, and will feature the second half of the season. The episode titles are as follows: “Darkness,” “Reckoning,” “Nexus,” “Monsters,” “Games,” “Animal,” “Doppelganger,” “Unique,” “Hero,” “Choices,” “Epitaph,” “Twist” and “Alone.”

The DVD and Blu-Ray both will be available on September 30.