UPDATE #2: Chad Perry of University of Muscle and Detroit native has seen the statue depicted in the photo. He confirms that the photo is  from the set of BvS, but not the new Supes costume, but simply a very large statue, approximately 15 feet tall. The statue sits atop some stairs that he says are reminiscent of step towards a government building, e.g. a courthouse. Perry claims that there is no background attached to the statue, so he believes it will likely be placed in front of a green screen come time to shoot.

He is in no way affiliated with DC or WB in any way, so it’s a tough call of whether this is in fact the intended purpose of the statue or if it is connected to BvS at all. Though if what he says is true, it looks like Metropolis may be paying tribute to their savior… despite causing some *ahem* cosmetic damage to the city.

UPDATE #1: As pointed out by a Facebook user at the DKN FB page, any attempt at crafting a costume would not begin with the figure in a contorted position, which means this was likely not used to make the creation of a costume, let alone the new Supes costume.

It seems like anything remotely connected to Batman v. Superman: Dawn of Justice will be making the news rounds. Even if those ties are slim at best. Last week, a random photo appeared online that looks to be an unfinished statue for a Superman costume. The photo was posted with claims that it was taken on the set of BvS, without any further explanation. This has lead news outlets to report that this could possibly be the “tweaked” design of the costume to which designer Michael Wilkinson was referring. 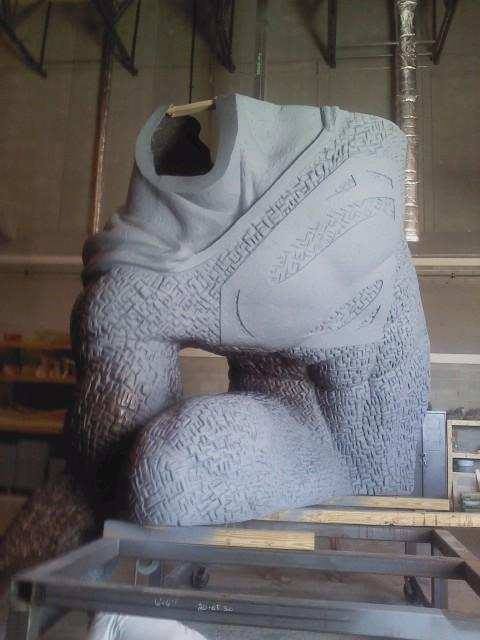 Personally, I don’t really see any noticeable differences in the costume. The S-shield seems a little different than the previous design, but other than that, nada. This “leaked” photo seems somewhat questionable to me because – you guessed it – it was not officially released… also, the source of the photo is dubious. ComicBookMovie posted the photo without a source or any real detail on the photo, but after doing some research, it seems the photo was originally posted to Facebook by the user Kal-El Real, with claims that the photo was sent to them via a friend close to production. The post has since been deleted.

Considering all the leaked photos of the Batmobile molds flying around the Internet, some folks are less doubtful of its legitimacy and believe that it really could be from the set.

What do you think? Leaked photo of new costume? Or just merchandise or fan artwork? Let me know.