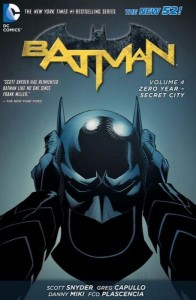 Batman’s origin has been told many times since the character’s inception in 1939. The origin that people hail most, at least in the medium of comic books, tends to be Frank Miller’s Batman: Year One. With that being such a definitive work, many questioned the necessity of doing the Caped Crusader’s origin again in main continuity. Just two years ago, Geoff Johns put forth a remarkable effort in the form of Batman: Earth One, which many people erroneously believed to be The New 52 origin of Batman, but the title flat out tells you it’s set in an alternate universe. (Until corrected, I’m still referring to The New 52 as Earth 0, which is what main DC continuity was referred to as before the relaunch.)

Enter Scott Snyder, the man who has delivered some of the most beloved and mythos altering tales in recent memory, in addition to Grant Morrison. Although he’s written acclaimed stories such as The Black Mirror, Court of Owls, and Death of the Family, does that entitle him to tackle the Dark Knight’s early days? I think it does. Year One was penned in the 1980’s and with so much having happened in the convoluted world of comics, it can be necessary to retrofit a character’s origin.We’ve seen it recently for Green Lantern and Superman (especially Superman) and with the DC Universe relaunching as a whole, it seems like the right time for a canonical retelling. Snyder does hit some familiar beats, but Zero Year is an entirely different story from Year One and definitely deserves a read.

Greg Capullo, Snyder’s artistic partner since the start of The New 52, returns to pencil scenes full of so much detail, yet have so many subtleties and frame scenes that could make the finest Hollywood directors blush. His artwork has a slightly different quality to it now that inker Jonathan Glapion is out and Danny Miki is in. One inker isn’t better than the other, but a keen eye will notice the difference. Let’s not forget about colorist FCO Plasencia, who provides a different color palette than you may be used to seeing in a Batman story. Those panels really pop! Gotham was a brighter city during the era depicted in this story and this artistic triumvirate gives you a metropolis different from any you’ve ever seen. The visuals alone tell you that you’re in for an entirely new experience.

The book begins with a flash forward to a post-apocalyptic version of Gotham that we are now seeing in the final third of Zero Year, “Savage City”. If you’re reading this for the first time in the trade, let me tell you there’s a lot to look forward to. Let’s just say the glimpse at the final act won’t spoil anything at all, but will intrigue you. When coming back to the present (technically the past), we find Bruce acting as a thorn in the side of the Red Hood Gang. It’s unfortunate that Batman #0 wasn’t included as originally solicited. I recommend that you try to find that issue at your local comic shop or buy it digitally to enrich your reading experience. And yes, it’s that Red Hood Gang. The Joker’s origin is also explored, but his identity remains a mystery. All we know about him is that he’s a ruthless, methodical mastermind. His crimes are meticulous and he kills as easily as he breathes. His chemical dip no doubt makes him even worse, but he’s not the average Joe that pre Joker was in The Killing Joke. Snyder treats every character with respect, so don’t get your Bat Underoos in a bunch.

Sometimes you have to sit back and marvel at how well Snyder writes dialogue. The exchanges between Bruce and Alfred are among the best you will ever read. Having mostly written a Batman in his prime, it’s a treat to see how different Snyder captures their interactions during Bruce’s more inexperienced escapades. I also enjoyed the addition of Bruce’s uncle, who gives him a tether to Wayne Enterprises and Gotham as a whole, which sets him on the path of being more than just a vigilante. Some nice seeds are planted with the Riddler, whom you could say is the big bad of Zero Year, but you won’t see him blossom into his full diabolical glory until “Savage City”. (Hey, there’s more incentive to buy the next volume!) The “I shall become a bat” chestnut is presented in a fresh new way, but I’m a bit indifferent to its execution. When you get to it, you will know what I’m talking about. 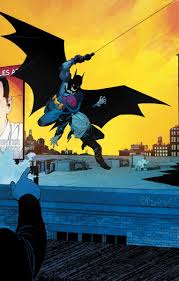 My favorite chapter has to be what was originally printed in the pages of Batman #24, which I believe remains the strongest issue of Snyder’s run, at least at the time of my writing this.There are many unforgettable moments like “Bat Country” and Batman going toe-to-toe with the Red Hood Gang, not to mention seeing Red Hood One take the plunge. I absolutely LOVE Batman’s Zero Year costume and hope to one day obtain an action figure bearing its likeness. There are also delightful nods to Year One, The Killing Joke, Detective Comics#27 (1939), and even Batman: The Animated Series. Rafael Albuquerque also pops in for the final ten pages and does a fine job taking over artistic duties.

The backup stories drawn by Albuquerque and co-written by Snyder and James Tynion IV are included. They show a little bit of what Bruce was up to when he was globe hopping and honing his craft. You can see how he acquired his car driving skills, learned escape arts, and his brutal stint as a pit fighter. Script pages are also included for your reading pleasure, complete with a foreword by Snyder that describes what he aims to achieve with Zero Year.

As I said earlier, this is a much different read than Year One. Granted the overall story is still ongoing in the monthly, but Zero Year may very well go down as the better work. I don’t care if what I’m about to say is considered comic book blasphemy: Frank Miller’s Batman isn’t my cup of tea, aside from Year One. That story was pretty much the only one he wrote in which I liked how Batman is depicted; I much rather prefer him as heroic than some unhinged psycho. I liked The Dark Knight Returns as a story, just not as a Batman story, if you get what I mean. Anything Miller wrote after that having to do with Batman is pretty much unreadable. I just think Snyder is the better writer and this may one day be remembered as every bit the classic Year One was. Sure, people gripe these days, but they did the same when Miller did his thing in the 1980’s; classics are classics in hindsight. Just know that unlike Year One, you will have to read Zero Year in two volumes. Volume 5 will be titled “Dark City”, but is set to include both “Dark City” and “Savage City”. However, I wouldn’t rule out all portions being collected into an omnibus in the future. I believe this to be the best volume of Snyder’s run to date and a must buy. Yes, I’m putting this above Court of Owls. Score: 9.5/10