Welcome to Batman Breakdown, where we take an individual, team, place or object connected to the Batman and give you all the information you need to know to throw down knowledge with anyone in a comic book shop. Today we’re going to be taking a look at one of the more recent additions to the Batman Universe, whose popularity has been steadily ballooning since her introduction 15 years ago. Yes, that’s right, it’s the only woman who can call the Joker “Puddin'” and get away with it. Fan favourite rouge and DC bombshell, Harley Quinn. 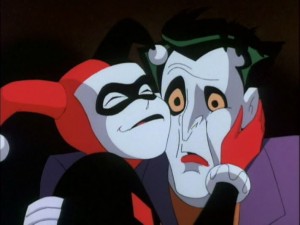 Harley Quinn’s introduction into the public consciousness differs drastically from most other characters  on the pages of Batman’s comics, in that she was not first introduced in a comic book. No, Harley made her debut on the critically acclaimed, fan adored and all around masterful 1992 television show, Batman: The Animated Series in an episode titled Joker’s Favour where she was only seen briefly in her now classic red and black  checkered outfit, instead mostly in a policewoman disguise. But even despite that and the fact that she was merely intended to be a small walk on part, Harley’s character popped and it wasn’t long before her creators and series producers Bruce Timm and Paul Dini had her show up in more and more episodes. While initially Harley seemed more like a flirty female henchmen, the show went on to establish that she was in fact more to the joker than just some hired crazy and was in fact his on again, off again girlfriend. Voiced by Arleen Sorkin Harley very quickly became one of the fan favourites of the series, by not only being just as funny as the joker, but seemingly just as manic and dangerous, but with a seemingly innocent heart of gold underneath it all. This lead to her first publication in the comic world, the 1994 graphic novel, Mad Love,  by character creators Paul Dini and Bruce Timm. 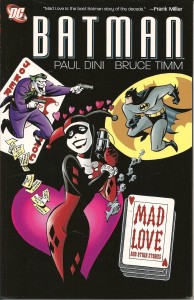 Mad Love is the first story to explain Harley Quinn’s origin story. In the tale, a young psychologist named Dr. Harleen Frances Quinzel is out to make a name for herself as an up and coming name in the psyc world and thinks that the best way to do that is by being the one to finally diagnose and cure the Joker. Unfortunately for Harleen, the Joker’s far more cunning and manipulative than she realizes and before long convinces Harleen that he’s actually perfectly sane, and so is Harleen, and they’re the only two who really understand each other. And so because of that, the fragile and suggestible Harleen gives into the Joker’s influence and shortens her name down to just Harly Quinn and helps the joker escape from Arkham Asylum. 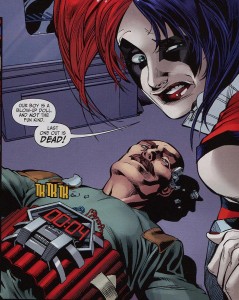 Since that point in time it seems that Harley and The Joker have shared one of the most intense bonds in the batman universe, whether in the remainder of The Animated Series or the Arkham games. She also has shown up on many TV shows, including the short lived Birds Of Prey where she was the titular villain, Batman: The Brave and the Bold  and a cameo appearance in this season of the Green Arrow focused Arrow. Harley is also a playable fighter in both Infinate Crisis, and Injustice: Gods Among Us, you can even run into her in DC:Universe online and she appears in the underrated Batman Beyond: Return of The Joker and is set to show up in the upcoming Batman: Arkham Knight. 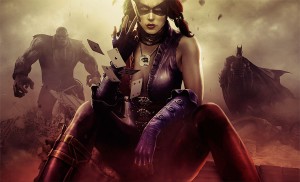 In the comics, Harley has been a presence since 1994’s Mad Love often popping up in Batman stories that involve the joker as well occasionally The Birds of Prey, Secret Society of Super Villains, The Secret Six or the Suicide Squad. Since the introduction of The New 52 continuity of DC comics, Harley has been show to be moving away from her direct attachment to The Joker, instead choosing to have a torrid affair with another batman rogue, Deadshot, during her time as one of the central members of The New 52’s Suicide Squad. She also, very recently, go her very own solo comic, Harley Quinn in which she’s shown to have a much more independent life than ever previously shown. Seemingly always now on a strange balance between villain and anti-hero Harley Quinn is shown in newer comics as a much more three dimensional character than just the Joker’s girlfriend (or even possibly Poison Ivy’s for that matter). 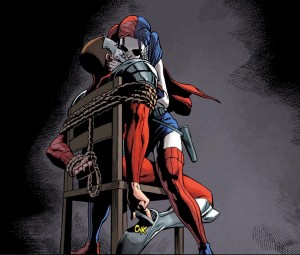 In terms of abilities, Harley has a known resistance to most toxins and poisons, probably derived from her close association with Poison Ivy and repeated exposure to Joker Toxin. Her exposure to so many chemicals over her time as a villain has also granted Harley low meta-human level agility and strength, which she uses in addition to her advanced knowledge of martial arts and street fighting. Harley is also extremely fond of firearms and hammers, both of which she uses regularly along with her dangerous lack of regard for most human life. 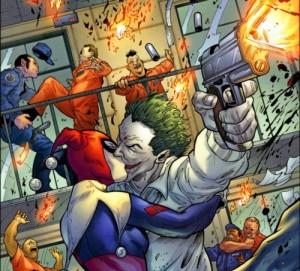 But no matter where Harley goes or how much she may at times seem to stray away, Harley’s relationship to “Mr. J” is never far from her mind. The Joker is one of the most twisted and psychotic villains in comics and his manic personality is one that can mesh well with only a handful of players and Harley Quinn is the only girl for him for good reason. Their relationship has been tumultuous to say the least, with sweet moments where they seem to be made for one another, and moments where they are literally at each other’s throats. But time and time again they come back to each other, with little more than a “Thanks Puddin'” and a “Of course Harley” the two can be in sync at a moments notice, which of course makes them very dangerous customers for someone like Batman to deal with. 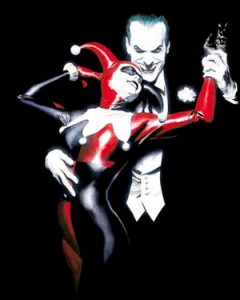 Harley Quinn is one of the most popular characters among hardcore fans of the Bat-verse and for good reason, she’s a capable, hilarious, sexy and dangerous gal, who’s boyfriend is the craziest man alive.