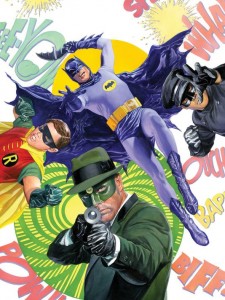 Today it was announced, via USA Today, that filmmaker/ comic book writer Kevin Smith (Batman: Cacophony, The Widening Gyre) will team with Ralph Garman to pen a crossover series from DC and Dynamite. Batman ’66 Meets The Green Hornet will be a 12-part series and will be available as a digital first bi-weekly series starting May 21 with print copies shipping June 4. Covers will be provided by the legendary Alex Ross and interiors will be done by Ty Templeton.

“It’s like getting to be 5 years old again and tell stories that you would have made up while watching the show as a kid,”  Smith confesses. “To be able to do it, man, it really does bring it full circle in a bucket-list kind of fashion.” 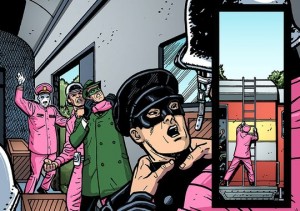 Garman sees this as a title that is friendly for readers of all ages. He adds:

Smith also has something up his sleeve that I find exciting. He like I and many readers of Dark Knight News are fans of DC’s animated films. He hopes to see this eventually adapted with surviving members of the original cast reprising their roles.

“Adam still sounds like Adam. Hopefully that’s somewhere in the cards down the road, if the comic book connects the way we think it will.”

To hear from the men themselves, check out the video featuring the latest episode of DC All Access at the top of the article. In addition to this exciting announcement, Scott Snyder discusses “Zero Year” and Brian Azzarello bids farewell to Wonder Woman. Azzarello says he may also re-team with Lee Bermejo for a Catwoman graphic novel!