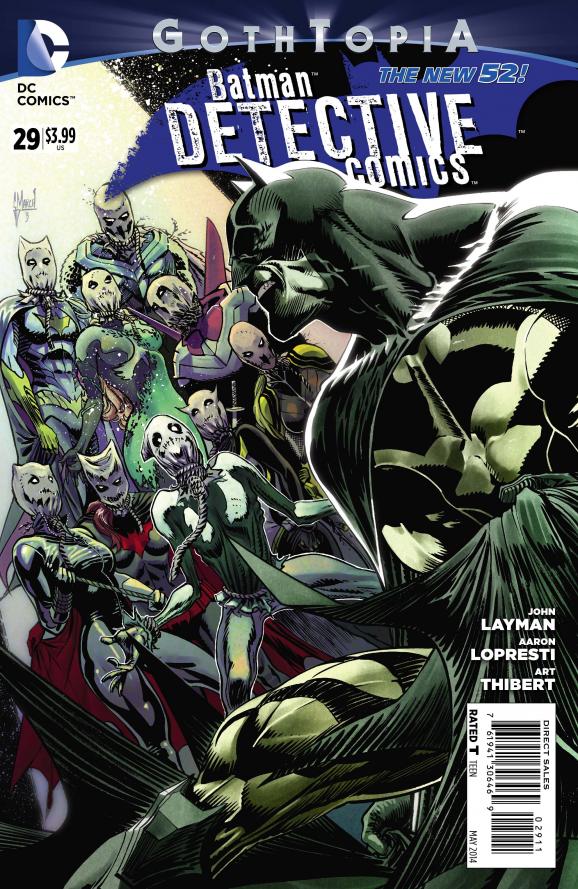 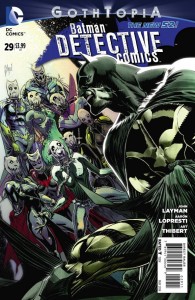 This week John Layman ends his spectacular year and a half run on Detective Comics with the final chapter of Gothtopia. Believe me, he goes out with a bang. This is the man that introduced us to Emperor Penguin, redefined Man-Bat and The Wrath for The New 52, and topped it off with a great Not-Quite-Elseworlds story. I’m sad to see him go.

I don’t want to spoil too much here, but the grand scale of Scarecrow’s plan is revealed. Layman makes good on delivering what you would expect in a book titled “Detective Comics”. Batman’s internal monologue comes off as very intellectual and I found it pretty entertaining when he broke down how fear toxin affects people, just as when he describes how he counteracts Scarecrow’s latest poison near the end. As you can tell, this is a story that very much features Batman using his brain to neutralize a threat and features all the elements you could want in a Batman finale. There’s also an epilogue with Catwoman that reminds me of Hush and is not to be missed.

As for art, this is the first issue going forward that is 100% Jason Fabok free. (Don’t worry, you can find him in the upcoming Batman Eternal.) Interiors are once again done by Aaron Lopresti. I really like his style and would like to see him do more Batman stories in the future. Cover art is provided by DC’s frequent go-to-guy for all things Batman, Guillem March.

This issue is a must buy whether you have been following Layman’s run from the start, have consumed all Gothtopia tie-ins, or have just read this three issue arc. Next month sees a new creative team take over in the form of Brian Buccellatto and Francis Manapul, fresh off an acclaimed run on The Flash. Let’s hope their stay in Gotham is just as satisfying as Layman’s. Score: 8.5/10