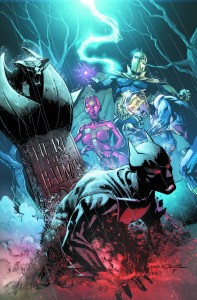 For those of you that are familiar with my reviews over at Comic Book Movie, you know that I’m not one to post many spoilers. Well, that rule doesn’t apply today. This is one book that calls for spoilers-a-plenty in its review. Turn away now if you don’t want to know the identity or origin of Earth 2’s new Batman. You’ve been warned…

I’ll address the elephant in the room right now. The new Batman is none other than THOMAS WAYNE. Rest assured that this is not a retread of Flashpoint. The book is essentially him telling Red Tornado and Hawkgirl who he is and how he came to be through a series of detailed flashbacks.

We join Bruce Wayne/ Batman 20 years ago as he is investigating the murder of Joe Chill, the man who murdered his parents. He skull has been violently crushed, as have three hired goons under the employ of one Frankie Falcone. Following up on this lead, Bruce questions Falcone and learns of a connection between their two families. Thomas saved Frankie’s life back in the 1970s and they formed a friendship. It was actually Frankie that introduced Thomas to Martha on this Earth! The Waynes get caught up in a partying lifestyle, but when their friendship with Falcone ends, it ends with a bang…. two of them, in fact. Fearing Thomas will expose his ill business practices, Frankie orders the hit.

It turns out Thomas survived the shooting, but faked his death so Falcone would never come after Bruce. Bruce does find out that Thomas is the one killing the thugs and we actually get to see interaction between father and son. It doesn’t quite go as you’d hoped. Not only does Bruce not condone his father’s behavior, but he is also disgusted with his addiction to Miraclo. Apparently Thomas is also the Hourman of The New 52. To atone for all he’s done and to honor his son that died saving the world from the Apokolips invasion (Earth 2 #1), Thomas becomes a Bat in his own right.

Tom Taylor, who also writes Earth 2 on a monthly basis now and video game tie-in Injustice: Gods Among Us, seemingly has a Midas Touch when it comes to writing superhero stories in alternate universes. Robson Rocha’s artwork is also very delightful. Believe me when I say that this issue is a must own and an instant Bat classic. Score: 9.5/ 10.