The Latest Rumors For A New ARKHAM Game 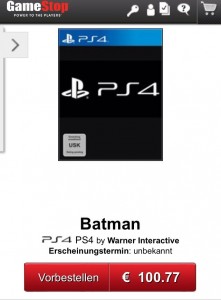 The folks over at Batman Arkham Videos have collected the latest rumors into a rather well put together video (see below). Among the highlights:

– Batman: Arkham Knight is a possible title and the game is likely developed by Rocksteady (makers of Arkham Asylum and Arkham City). Personally, I believe Arkham Knight to be a very solid title for the next game, but they do point out that it was among domains registered for what ultimately became Arkham Origins, developed by WB Games Montreal. It’s probably a safe bet that Rocksteady is developing the fourth installment and I theorize that they will rotate games with WB Games Montreal in order to pump out Arkham games on an annual basis, a la’ Call of Duty.

– Kevin Conroy let the cat out of the bag and is voicing Batman in an upcoming Arkham project. Considering that Conroy said they had been working nine or ten months at the time of his statement, I think it’s fair to assume he’s talking about a video game. They bring up the possibility of his involvement with the upcoming direct-to-video animated film Batman: Assault on Arkham. He could very well be in both, but let’s not rule out Roger Craig Smith (Arkham Origins) or Jason O’Mara (Justice League: War, Son of Batman) lending their pipes to the animated film.

– Gamestop Germany has listed a yet to be named Batman game on their website (PS4 listing pictured above).  Apparently the listings are legitimate and it’s not unheard of for retailers to spoil releases prior to official announcements. The high price point makes me think that the listing is possibly for a collector’s edition. Hopefully they make PS3 and Xbox 360 versions in addition to PS4 and Xbox One releases. It wouldn’t hurt to wait a little longer before making the series exclusive to next generation consoles.

I have only one thing to ask of the game’s developer: PLEASE make the central villain someone other than The Joker! He may be my favorite villain, but it’s time to let someone else take the spotlight after three games. Arkham City alluded to Hush and Scarecrow playing big roles in the next chronological installment and I hope that pans out. A Man-Bat boss fight wouldn’t hurt either.