Batman #24 was a huge issue with the story finally showing us Bruce’s first outing in the cowl.  Since then,  many fans have been chomping at the bit next chapter of Zero Year.  Now, with Batman #25 just a few days away, we get to see the Batmobile’s Zero Year incarnation. 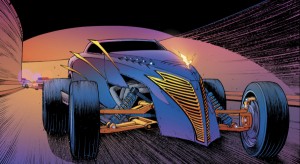 The LA Times had the chance to speak to Snyder about the design, and here’s what Scott had to say:

We wanted it to be something where you’d see it and be like … “What the hell is he driving this showy car?” in a way that both said race car and almost rocket and something that a young person would make with all kinds of tricks to it and something colorful, not something black and dark, something that’s almost in your face as if daring you to catch it.

Greg Capullo, I think, did some amazing work on it. We did a lot of drafts. … [Laughs] I actually asked FCO to try coloring it yellow with black details and bats, and it just looked so crazy that we killed it, because it looked like he was driving a bee. … We had to cut a little bit closer to convention. But we feel like we’ve done a good job. I feel like they’ve done a terrific job making something that doesn’t look like any Batmobile prior.

Snyder also spoke about the relationship that Bruce and Gordon will have:

With the Gordon material, the idea was similarly to try and do something that has nods to classic moments in their relationship – so you’ll see in an upcoming issue a moment that echoes something from “Year One” and you’ll see things that echo some of the classic moments between the two of them in their first year together. We wanted to do a story that really gave you a new iteration of their relationship – and it’s much darker here. 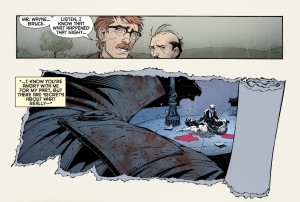 This second section in the dark, the beating heart of it has to do with the night Bruce’s parents were shot and the mystery around that. Core things are not changed – Commissioner Gordon didn’t shoot his parents or anything insane like that. But at the same time, the things that happened around that night, the day of the shooting, the reasons that no one was there that night, all of that kind of stuff is now part of the story in a big way. His relationship with Gordon is hugely changed. He really thinks of Gordon as one of the worst people in Gotham … and he vows never to work with him, and sees him in the police force not just as an obstruction but as an open enemy. 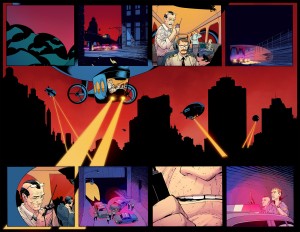 Well it once again looks like we are in for an exciting issue.  Snyder and Capullo have really played with expectations and have taken us for a ride, but what do you think?  Have you enjoyed Zero Year, and are you one of the many fans that waits anxiously for each new chapter?

Rumor: WB Looking at Two Other Actors for Nightwing in Batman vs. Superman