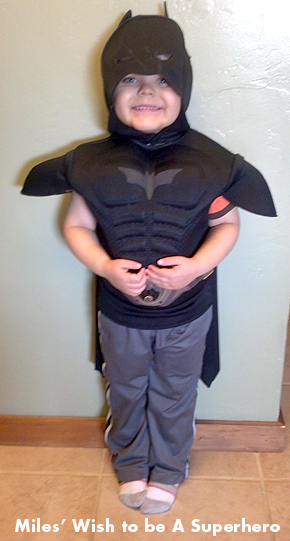 Miles, a 5-year-old kid with leukemia, will be Batman for a day thanks to the Make A Wish Foundation, and after training with Batman for the past few weeks ‘Batkid’ will save the day for  San Francisco on November 15th. His schedule of crime-fighting has been posted up on the Make A Wish Foundation website, along with ways you can participate and help this little boy’s dream come true.

His day will start with a call from San Francisco’s Chief of Police, asking for help from the one and only Batkid. Batkid will rescue a damsel in distress at the Hyde St. cable car tracks in Nob Hill and catch “the Puzzler” in the act of robbing a downtown vault, before a quick lunch break at the Burger Bar. While he’s there, he will get a message from the police chief to look out the window, where he will see a huge crowd of volunteers crying for help from Batkid. When Batkid rushes to the scene, he will find that the notorious “Mr. P” has kidnapped a famous San Francisco mascot. Mr. P will attempt to escape in a getaway car, but will soon be caught by Batkid, who will save the day for all of San Francisco and who will be awarded the key to the city.

For anyone in the bay area, you can participate by being at certain locations in the city at certain times and help make this little kid’s dreams of being a superhero come true! The information about all the events of the day from the Make A Wish Foundation site are as follows:

The foundation encourages people to participate and catch video and pictures, and most of all, to provide inspiration and excitement for Miles in his battle with leukemia. As it says on the Make A Wish site, “This is a great opportunity to see the magic of a wish in action – and a perfect outing for kids, grandkids and Bat-fans everywhere!”