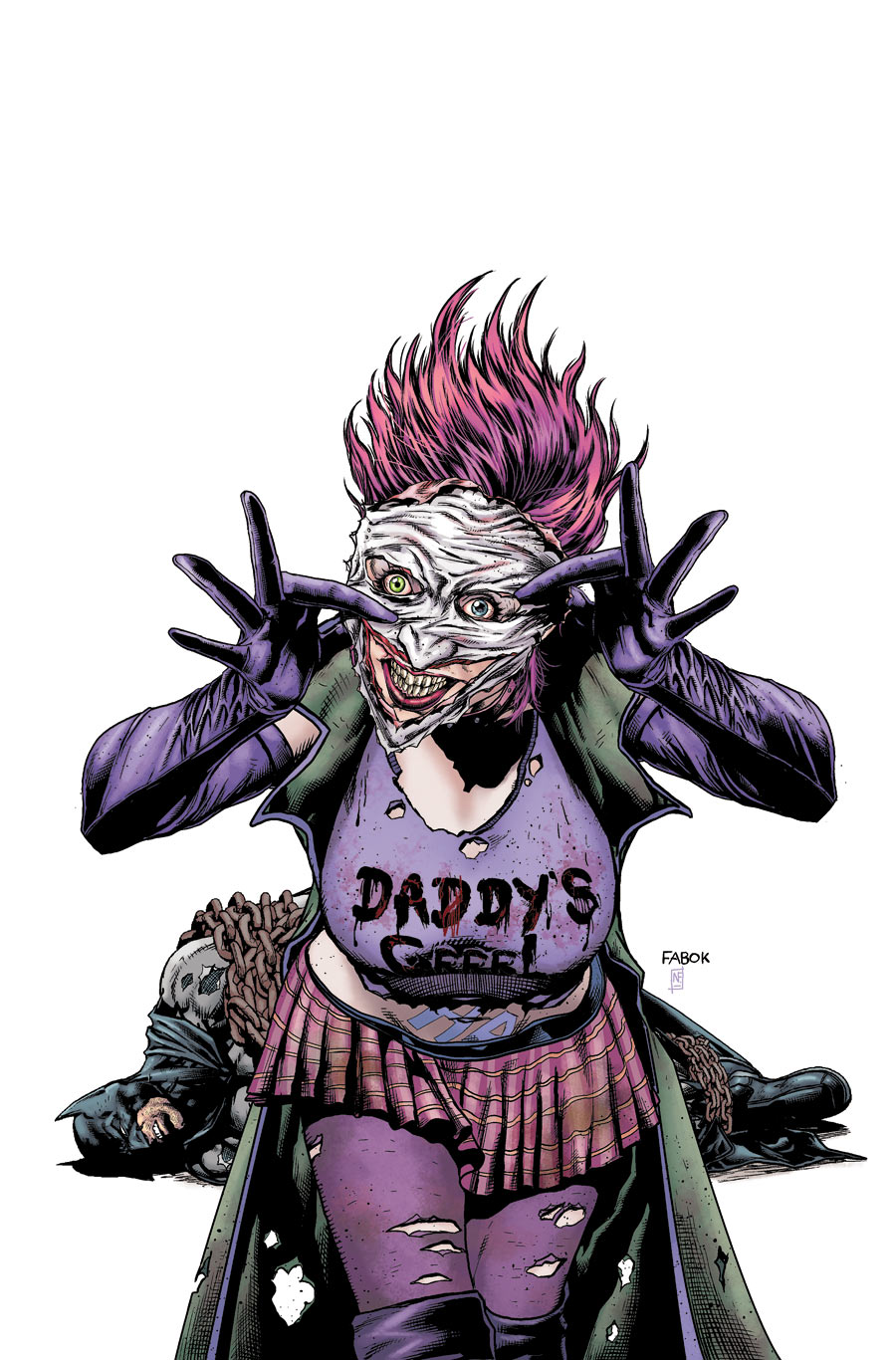 Ann Nocenti has been writing quality comics since before I was born, for Marvel. Previously, her work for DC has been limited to a few titles like Kid Eternity, but these days she’s writing not one but two ongoing series for DC, Catwoman and Katanna. However, she’s getting noticed lately for something new, the reintroduction of The Joker’s Daughter into the Nu52, a character that has had quite a bit of buzz lately. CBR sat down Nocenti to talk about her work on the upcoming Villian’s month one shot in Batman: The Dark Knight #23.4 The Joker’s Daughter. One of the first questions right away was if this was Duela Dent, the Joker’s Daughter that was previously around prior to the Nu52’s reboot. Prior to the reboot, she was in Teen Titans, often claiming she was the daughter of various villain’s, up to and including Doomsday of all people, and was part of the Teen Titans right before she was killed for some reason during Countdown. It was implied that she was the daughter of the Joker from another universe. As you can see, she doesn’t really have a notable impact as a character. Until now, that is. Nocenti talks about making The Joker’s Daughter as more than some kind of joke character, but someone who has a purpose in the DCnU.

I can’t say too much about her yet, but [artist] Georges Jeanty created a stunning world for her. I had a lot of fun figuring out the mechanics of the Nethers, a town flooded to build Gotham Reservoir. Who lives down there? What kind of people would such an underwater world attract? And I can barely look at Jason Fabok’s cover, it is so gorgeously terrifying.

I wasn’t kidding about the Joker’s Daughter having a lot of buzz lately. The reorders for her issue of Villian’s Month are through the roof. So what’s the deal? What’s causing this reinvented character that was essentially kind of joke, into this fascinating figure?

Well, first off, much of the credit goes to Scott Synder. He created an amazing storyline, along with all the other Batman writers and artists, that left one shred hanging, so to speak. So I feel honored to be handed “The Face,” as I tend to refer to it. The power of The Face is profound. It’s a visceral power. It’s got a cackling, twisted power. It’s a dark trickster. But what is it? That’s what we explore. The fact that we live in an age that celebrates youth and beauty, what if someone twisted that notion? What if Ugly were the new Beautiful? That is the essence, at least in this first story, of the Joker’s Daughter.

While she will first appear in the pages of Batman: The Dark Knight Joker’s Daughter will be appear in Nocenti’s Catwoman, as well.

…The Joker’s Daughter is in “Catwoman” #24. These two women are pitted against each other in a battle for Gotham Underground — and over something else. It’s a triangle, but the third player in this triangle is not who you would expect.

CBR asked her, “How do you channel such a mad woman” for the story, as all indicators show that the apple doesn’t fall very far from the tree where the Joker’s Daughter is concerned.

For the Joker’s Daughter, I channeled my teenage years. Many teenagers sit in confines of their parental homes and dream of another world. They feel trapped, I know I did. So I hid in books, was basically a nerdy, happy kid, but yearned for the larger world. That kind of ache, combined with the power fantasies of getting out and finding yourself, were much of what I thought of with Joker’s Daughter. So, not a madwoman so much as that other kind of madness: being a normal teenager. With an edge…I think it’s about getting to something elemental. For Joker’s Daughter, it was starting with the confusion — and sometimes horror — of being a teenager in the face of the cult of beauty, and working past that into empowerment.

So the lure of the Joker’s Daughter might be she’s like the Joker, with a teen slant to it. I can see the appeal, especially if you like the Joker. The restlessness of youth combined with the horror and madness that lurks in Gotham City. A city that is currently tearing itself apart without it’s protector, The Batman. Find out more about who and what the Joker’s Daughter is, why she has her “Old Man’s” face, and more, when she appears in the pages of Batman: The Dark Knight #24.3, September 25th