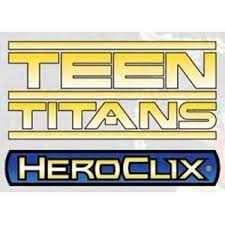 First off I will admit I know nothing about HeroClixs  miniature games but for all of you that enjoy the game good news. Over at Action Figure Insider they posted pictures of WizKids latest expansion of HeroClix, Teen Titans figures.  AFI gives you detail on what you see below.

The set is available in 4 options. 3 are blind purchases: 5 figure boosters, super boosters, single figure packs. The last is a “Fast Forces” set, a clear blister which shows you the 6 figures you get and comes with a 2 sided map. Although the characters and sculpts overlap, the dials in each subset are unique. The superboosters include either a “team base” with 3 pieces special to the base or a colossal figure.

For more details on the latest expansions on these miniature HeroClix figures head over to HeroClix.