While the Damian Wayne’s death would and has weighed heavily on the minds of the fans, it is always a question on how the writers themselves feel about the Boy Wonder’s passing. Many Bat-Writers were actually big fans of Damian Wayne, and so eight DC writers got together and talked with Newsarama  about the fallout from Damian Wayne’s untimely death in Batman Incorporated #8.  They also get a chance to speak about their own personal feelings on the matter, as writers and as fans of the character and his dynamics with the other members of the Bat-family. As reported before, Peter Tomasi had already given his interview to Newsarama, and spoke about the future of the Batman & Robin title, but the other seven current Bat-writers had new things to say about the future of their titles in the wake of Robin’s death. Scott Synder, writer for the current “Batman” ongoing had this to say about Damian’s passing and it’s impact for the future of the title.

I didn’t use Damian very much during the run, but when I did, I was always amazed at how complicated and rich, heartbreaking and heartwarming, his relationship was with Bruce. And what a vibrant character he was in his own right. To be completely honest, when he first showed up those years ago, I was skeptical I would like him. But, over time, I really fell in love with him as a character — testament to the amazing work of Grant [Morrison] and Peter [Tomasi]. I really regret not using him more in Batman, now that he’s gone. But he’ll be deeply missed, and he’ll always be there in Gotham in spirit.

On the matter of Batman #18 though, Synder said he did plan to address this new death in the family.

Our issue #18 will definitely address Damian’s death. But the truth is, I wanted to steer clear of doing anything too central to Bruce’s own experience of the death, simply because in our local group, Peter has been dealing with that relationship so masterfully throughout his run, I wanted to give him more room with Bruce. So instead, in Batman, we will be seeing Bruce’s experience from a bit of a distance, through the eyes of Harper Row and her brother. I really wanted to show how far Batman’s pain spreads, when he’s hurting on Gotham.

Meanwhile, on the Detective Comics front, writer John Layman had little to say about the matter.

Batman is going to be concentrating on his work, even more so than usual. But again and again, he’s going to find himself facing reminders of what, and who, he has lost.

Kyle Higgins, writer for Nightwing, reveals a little as well about where Dick Grayson will be in the aftermath of losing his one-time partner.

Dick has gone through a lot the past few months. However, as we explored at the end of

issue #17, Damian was something of a light at the end of the tunnel. Now, having lost him too, Dick needs to dig deep to find the resolve to pick himself up again.

He also took some time to speak about Damian’s death for himself, as fan of the character.

For me, Damian’s death is especially impactful. He hadn’t been in my book very much, but his time with Dick-as-Batman is one of my favorite eras in comics. He was also the character I had the most fun writing… quippy snark and all.

Ann Nocenti, writer for Catwoman, mentioned that this would have barring on the Catwoman book as well, further adding

developments to her relationship with Batman.

In Catwoman #17, Catwoman steals some iconic Gotham paintings that Batman loved. She is missing him, and somewhat unconsciously, does this theft to get his attention. His reaction to seeing the paintings gone is huge: The empty spaces on the walls resonate with such hollowness and loss that he takes his fury out on Catwoman. In Catwoman #18, he chases after her and fights her, thinking that if he forces her to put the paintings back, it will help replace the other things he’s missing.

On the matter of Damian’s death, Nocenti reveals that she was a big Damian Wayne fan.

For me personally, Damian was my favorite in the Batman family. I loved his arrogance, his stubbornness, his blunt, fearless humor, and will miss him.

Since Batgirl has two writers for the next two, Ray Fawkes for #17 and regular Gail Simone for #18, both had something to say about the upcoming effects on Batgirl, and how Damian’s death is hitting her as well. Ray Fawkes had this to say about Batgirl.

Babs is hit really hard by Damian’s death. She’s caught in the middle of an extremely high-pressure conflict on two fronts when she hears about it, and the news threatens to break her, really — especially while the wounds of “Death of the Family” are still so fresh — so she’s forced to bury it deep inside and deal with it later. No doubt that’s exactly the wrong thing for her to do.

Events in issue #19, my return issue, combine with Damian’s death to nearly overwhelm Barbara, and she takes some drastic measures to regain her balance. People will be surprised, I guarantee it.

On a slightly less related note, World’s Finest does include Helena Wayne, the daughter of Earth-2’s Batman and Catwoman, and it’s writer, PaulLevitz, spoke about her connection to Damian, her alternate brother of sorts, which we got to see briefly this week in World’s Finest #10.

A wise editor once told me that in the end, there are two great stories: good man turns bad and bad man turns good. By that token, Damian’s journey and end is one of the greater tragedies in the long Batman canon.

In World’s Finest, Helena’s deeply upset by the loss of her not-brother…really the first person on this new Earth she’s felt a strong relationship pull towards. And there’s an interesting moment in the Wayne Family graveyard in World’s Finest #10 this week.

Last but not least, is Scott Lobdell, current writer for Teen Titans and Red Hood and The Outlaws. On the matter of Damian’s death, Lobdell had an interesting reaction.

Me, personally? Not so much from a writing point of view — I didn’t have that many opportunities to write him, but I took advantage of the few panels I had. From a human point of view, though, it makes me profoundly sad to this of this little kid being killed as part of this huge epic revenge story. If it were up to me, he would still be alive.

As for the matter of Jason and Tim, however, he has revealed that while has no short term reaction planned for him, Tim will react quickly.

As far as the characters? As you know, Jason has been caught in his own major life-changing issues this very moment, so I’m afraid he’ll have no short-term reaction that I’ll be writing. I am sure James will do something great! Tim, on the other hand, is going to have a very strong and life-changing reaction to his “little brother’s” death. Remember, he formed the Teen Titans to protect his fellow teenagers. You can only imagine how hard it would rock his world to realize that if someone as experienced and competent as Batman can’t prevent the death of a Damian…then he and the rest of his team had better figure out a way to step up, and quickly.

The ripple effect of Robin’s death is sure to be felt as keenly as Jason Todd’s death once was in the issues and time to come. 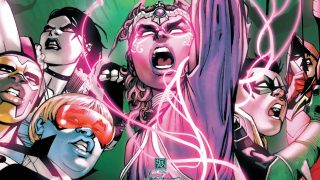 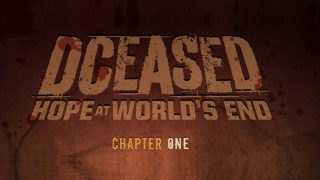