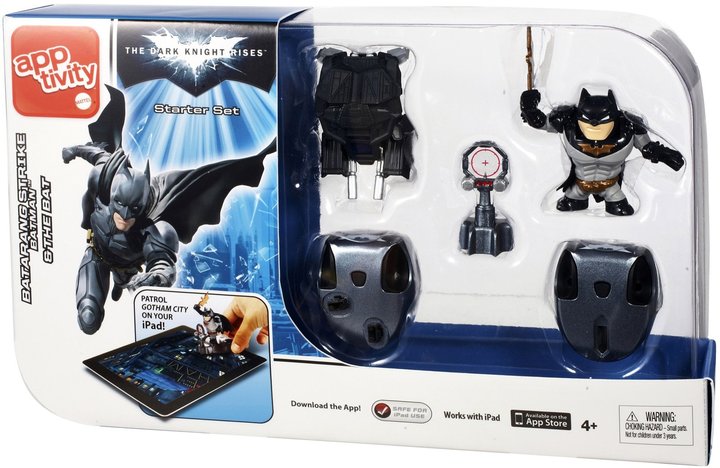 Are you an adult or a parent who is a fan of Batman, and you want your kids to be just as into Batman as you are? Look no further, Mattel has created their new Apptivity game called The Dark Knight Rises Apptivity. Click the jump to see more.

Mattel is mostly known for their actions figures and toys, but the times have changed and a new toy evolution has emerged. Action figures are now becoming more engaging for children to play with and thus the Apptivity line was introduced. The Apptivity games bring video games and action figures are together to create new interactive entertainment experiences. This line of interactive entertainment is mostly geared towards children, but adults can enjoy them as well. Their new line of Apptivity game is The Dark Knight Rises and we’ll see how entertaining and beneficial this game will be for children.

What is The Dark Knight Rises Apptivity?

Mattel has sent Dark Knight News a sample of their Batman apptivity game called The Dark knight Rises where you and your children can battle Bane’s army to save Gotham City. It is a nine level adventure game that where you will play only as Batman. When you purchase The Dark Knight Rises Apptivity game, you will receive a Mattel Batman figurine that comes with one accessory such as the EMP assault, Batrang, Riot Cannon, or Grapnel Attack. Each accessory creates a different experience in the game, but if you collect them all; your child can use different attacks in the game to defeat Bane. You can also buy The Bat to take down helicopters found in the game. The Bat and each accessory are sold separately.

Due to the small size of the Batman figurine that comes with this game, it is advised that this game is only meant for children who are four years old and older. Unfortunately, the game is right now only accessible for iPad users and you must download the free app from the Apple store.

How beneficial and entertaining is the game?

The game is quite enjoyable for both children and adults who want to play as Batman.  It is a sure way for your children to become more familiar with using the iPad while having fun. Similar to the first computers or the internet, the iPad will become another tool for your children’s education. The touch screen is a perfect way to increase hand-eye coordination in children, where your children will be able to estimate length and space thus promoting analytical reasoning. For this game, your child will have to use the Batman figurine on the touch screen and swing the figurine left and right to punch thugs. Sometimes, there is more than one thug and your child will have to analyze the situation and use their accessory (EMP assault, Batrang, Riot Cannon, or Grapnel Attack) to fight. At that moment, your child will begin to use their reasoning in order to defeat thugs in the game while increasing their hand-eye coordination.

As for entertainment, the game is very cartoon-like that features locations (Gotham City’s back alleys and skylines), and enemies (Bane, Catwoman). Your children will unlock new in-game abilities throughout the nine level game, purchase upgrades with virtual money and access bonus content accessible from the main menu. You can also earn achievements, with support for Apple‘s Game Center service.

What are instructions for this game?

After you download the app you must turn off multi-touch gestures on the iPad for the action figure to work properly while sitting on the screen. Make sure you enable the multi-touch after your child is finished using the iPad. The game is inspired by The Dark Knight Rises film; you’ll place Batman on the screen and move throughout the combat-heavy story mode. It is advised that you allow your child to use the quick mode so they can get a handle on how to use Batman on the touch screen. Your child will learn quickly on how to  twist Batman counterclockwise to punch an enemy, pressing down slightly to descend off a building or tap the small button behind the Caped Crusader to use your accessory ((EMP assault, Batrang, Riot Cannon, or Grapnel Attack).  At the start of each mode, your child will have to register their Batman figurine so the game knows which accessory you’re using for the level.

Is it violent and will it hurt my wallet?

The game has no blood and your children are not using guns to hurt anyone. However, it should be advised that parents or an older adult should supervise the children, and try to discuss what is fantasy and what is reality. As for your wallet, if you would like your children get a full experience with the game;you can buy different accessories (EMP assault, Batrang, Riot Cannon, or Grapnel Attack) for your child to beat the game. Each accessory comes with a different color Batman such as gold, ice blue, royal purple, and black. So, you’re buying another packaged Batman, which will cost $14.99-$29.99. In the end, your child will be able to beat the game and keep each Batman figurine as a toy for completing the game.

The game is meant to put children and adults into Batman’s shoes to save Gotham City. Anyone can enjoy it and you can get the figures as collectibles. So, it’s a win for collectors as well.

Brought to you by Mattel, click HERE to find out more about the product.