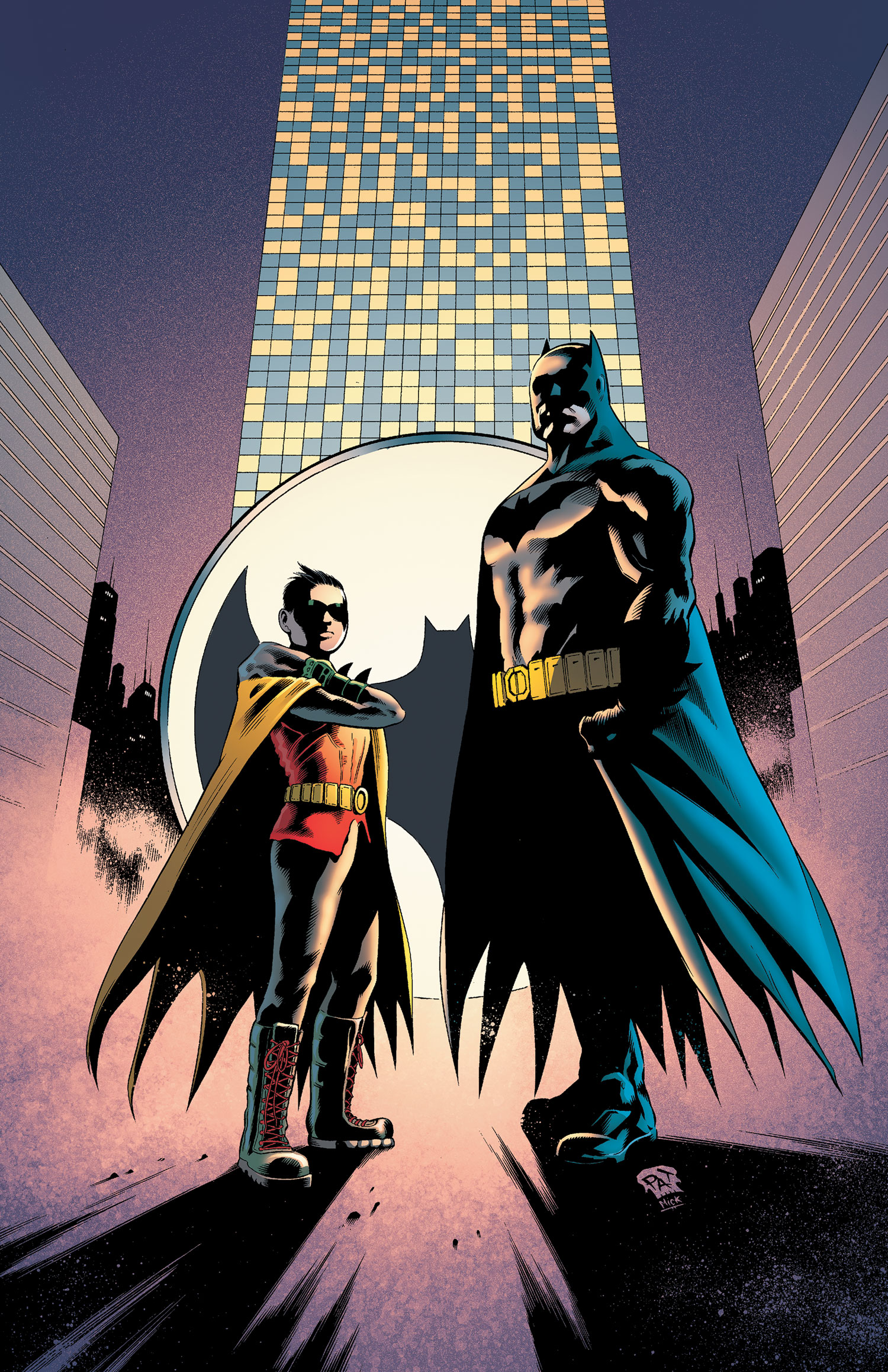 It has been that dreams are a a reflection of your true mind, feelings and fears and in Batman & Robin 17, we are treated to the rare opportunity of seeing the dreams of three integral characters from the Bat Family. Picking up shortly after Death of the Family, Batman and Robin return home to the cave after a long night on the job, and along with Alfred and Damian’s pet dog Titus, they all go to sleep. However this is where the issue becomes interesting, because it is a peak into the minds of the characters after the horrifying events of Death of the family, giving the reader some insight into where they are all are now after The Joker had run through the gambit both physically, emotionally, and spiritually.

The Story
It can really be said that Batman & Robin isn’t really Bruce’s book at all, but is Damian’s. Damian is really the heart of these stories, and in particular, his dream is the first and most intense of the three dreamers in this story. He dreams of a the submarine that was seen in the Grant Morrison arc “Batman and Son” which introduced him to the DC Comic universe, and he speaks with himself. This is great for a multitude of reasons, because Damian is very much his Father and Mother’s son. He wants to be like his Father, whom he admires insanely, but he is also a deeply conflicted man about his own identity and fears that he is doomed to fall to his Al Ghul nature. That’s an idea that’s been running through the entire run of Batman & Robin Vol 2, and is finally addressed more directly by Damian speaking with himself and seeing his allies drowning to death, as he reacts in horror, waking from his nightmare. This is further pointed out by showing Damian’s character growth. It was a minor controversial point early in the run of Batman & Robin vol 2 that Damian exhibited some signs of a sociopath, like killing the bats in the Bat Cave, although it was meant more symbolically that Damian had not yet learned the most important rule of Batman’s mission, the value of life.

There is an actual callback to that original Bat killing incident and shows how far Damian has come, even in the wake of The Death Of The Family, where, most fittingly, a robin has landed on Damian’s bed, and he grabs it much like he did the Bat, earlier in the run. But instead of violently killing it like the bat, he reassures it that he won’t kill it, and let’s it fly away, chasing after it on his dog Titus. Titus is integral to this scene, because it through Titus earlier in his run that Damian began to care and feel responsibility toward something concrete, other then his father’s abstract ideas like the idea of his mission, or Gotham City as a whole. Titus helps facilitates Damian’s growth, and so together they go on their way like a normal boy and his dog to chase a bird. However he runs into find his father, much like the iconic scene from Batman Year One, bleeding with a small bell in his study, However this time, a giant bat is sucking Bruce dry, and Damian wakes up from this “fake out” dream. Bats are always going to be a motif in Batman, obviously, but it’s used really well here, and in the run in general.

Alfred’s dream is in contrast to Damian’s, and is there to build some levity to break up the “brooding” pair of Batman and Robin, as it is a combination of an old memory, and wish fulfillment. The reader gets to see a more light hearted and fond moment between Alfred and his former employer, Thomas Wayne, wrapping and giving Martha Wayne the pearls that would haunt Bruce’s nightmares for the rest of his life. Subtlely, the dream changes from the past to modern day as Alfred opens the fridge and goes into the Batcave to discover the Joker bashing in the heads of the Bat Family with a hammer and Joker poison. Alfred then promptly blows the clown’s head off with a shotgun and wakes up. Like anyone who isn’t The Batman, killing the Joker in his dream elicits a small smile from Alfred and he goes back to sleep. But this dream works because Alfred was essentially a hostage and unable to do anything during The Death Of The Family, and essentially watched Bruce and family go through such pains that he wishes could just solve the problem by killing that clown once and for all. Alfred has always been forced to watch Bruce go through hell for years, and then Dick, Jason, Barbara, Tim, and Damian have all had to suffer as well while he watched, sewed up their wounds, and comforted them in their darkest moments. It’s obvious that Alfred wishes he could put an end to all their greatest troubles, which is more often then not, The Joker who has hurt them all in ways no other villain from Batman’s rogue gallery has.

Further connecting to the early parts of the run, Bruce dreams of when he symbolically put away his feelings of mourning his family’s death on a small boat. This time, he is joined by his parents, who are voicing his inner most doubts that he can’t just simply put his feelings on a boat and say he’s over it. Bruce rejects this saying it’s “his boat” or “his life”, and he can do it. Following this, the water swallows up Bruce and his boat as he lands in a sea of his worst enemies, all of them showing up, while he yells at them to stay off his boat. Bruce is fighting to keep his worst enemies from not only being in his life, but consuming it. Finally, a giant Whale with a Joker smile forces Bruce into the water, where he sees Damian. He offers his hand to his Father, and then Bruce wakes up. In the wake of the Death of the Family, and even during the Death of the Family, thinks always of his son, and how his son helps him both physically as Robin, and emotionally, in a way that is not unlike his relationship with Dick. He visits his son while he sleeps, tucks him, and rubs his head, in a rare emotional moment from Bruce. The book ends with another hard night’s work, and Batman and Robin watching the sunrise. Bruce turns to Damian, reminding him that he’s dreaming, but Damian smiles and says it’s a dream he does not want to wake from.

The Art
The penciling in this book isn’t perfect, but the use of coloring is used amazingly. My favorite in particular is the ending where Bruce and Damian are sitting on the tower, watching the sun rise. If I had to think of a real criticism, is that I found the faces were inconsistent. For example, compare Bruce’s face when he’s waking up to when he’s shadowed and tucking Damian into bed. That said, it’s a minor nitpick when you really look at the shading and use of colors. Here are some panels I particularly enjoyed from all the dreams.

Final Thoughts and Rating
This is a great story to read following the Death of The Family, and a great story in general if you wanted a brief one shot look into the minds of Bruce, Damian, and Alfred. It shows the love and faith both Damian and Bruce have in each other, as well as Alfred’s protective feelings toward his family. It’s nice to get a Bat story that, while connected to the ongoings of the other storylines, is pretty short and insular in nature. I personally found it a breath of fresh, as well as the Batman & Robin Annual, after the several month long run of Death of The#17, and I really needed it after the end of that long storyline, and I think this was a conscious choice on the part of the writer because this shipped the same day as the climatic Batman #17. The story is not perfect, as I would have liked to see more character interaction in the dreams themselves, but this was a story of the characters looking at themselves within the space of their dreams. I feel that it helps relieve the tension of the ongoing problems of the Bat Family, and reminds the Reader of the love that some of the family has for each other. Alfred, Bruce, and Damian all show this love through their dreams. It remains to be seen if this love will be shown in the real world, in the wake of Death of The Family.