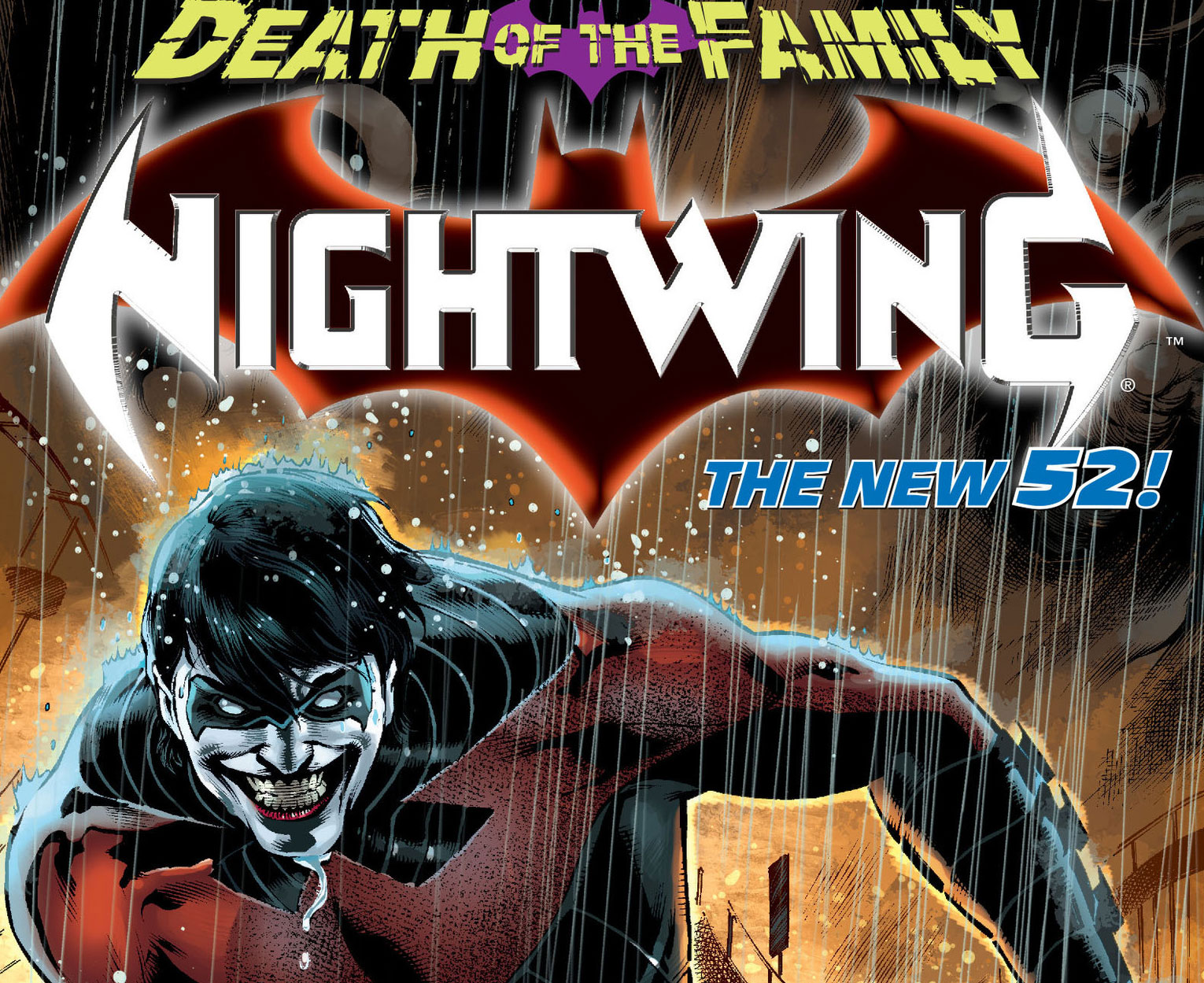 Joker brings “Death of a Family” nightmare to Nightwing. Click the jump to see the breakdown of the issue.

PLOT: A “DEATH OF THE FAMILY” tie-in! After the shocking events of last issue, it didn’t seem like things could get much worse for Nightwing, but when The Joker’s involved that’s never a safe bet! Dick’s past is about to burn down around him – literally.

I was not particularly impressed with the last issue of Nightwing, which puts me in the vast minority. I would not say it was a bad issue, but it simply failed to “WOW” me. Joker killed a guy who looked like him and then left him hanging in a creepy place, but beyond that, all he did was give Raya a dose of laughing gas and turn her loose on Nightwing. I found the whole setup rather boring because Joker uses innocents against heroes all the time, and Raya’s death just felt like a waste of a potentially interesting supporting character. I certainly do not feel any personal loss over a character that was created for the sole purpose of betraying Dick Grayson, yet apparently, we are supposed to feel great loss over her passing. I’m afraid I do not invest in characters that easily.

At the end of the last issue, we are left with the threat of Joker heading to Amusement Mile to wreak havoc. Has Joker planned a fun filled evening of thrills and spills for Grayson, or is Dick’s date with destiny a disaster?

In this issue, Nightwing confronts Joker at Amusement Mile where the Clown Prince of Crime tortures Dick with his past while destroying his future.

I was extremely impressed with this conclusion. I am not speaking of the conclusion of Nightwing’s role in “Death of the Family,” but the conclusion of Eddy Barrows penciling on the Nightwing series. Overall, I’ve enjoyed Barrows run, but I think this issue is probably his best yet. Nearly every page was a piece of art that stands above the crowd. Barrows really caught the elegance and flow of Dick’s movement. The first page is beautiful and deserves to be screen capped! Pages two and three featured a spread that has Dick’s movements tracking his graceful parkour across the Gotham skyline. We get our first real glimpse at Joker’s face on page 5 where Barrows has found a new look for Joker with the skin pulled back so tight. This has to be near the tearing point and it shows plenty of extra muscle around the gums. There is a beautiful, if morbid, spread featuring some unique use of skeletons on pages six and seven. Nightwing uses some throwing knives with his symbol design on them. However, I do not believe we have ever previously seen. (I’m a fan for whatever creators might be listening) Again, that panel deserves a screen cap! On pages nine and ten, Dick experiences some visions which are excellently executed. Throughout the rest of the comic, every move that every character makes seems to have real weight behind it.

I’m a big fan of Brett Booth’s work, and I am looking forward to him taking over Nightwing‘s art, but now that I know Barrows can deliver this quality of work, I am eager to see his take on the Teen Titans as well.

Rod Reis deserves a lot of credit on his coloring as well. I’m no expert on comic coloring, but I can tell he did something on pages six and seven to give that scene a haunting, foggy feel. The vision scenes are also a highlight with great use of green on the gas.

I know I am belaboring the art in this review, but I would not feel right without giving Eber Ferreira, the inker, his due . The shading in this issue adds a ton of depth, and it is in high use considering the dark setting and dark tone of the story.

Packed Full of Surprises or More of the Same

If you want to impress me with a story, the number one thing you can do is surprise me. I love a good, turn of the unexpected. It doesn’t have to be a huge plot twist, but just something I did not see coming.

Since I’ve started BatWatch, I’m hearing theories on future happenings from Bat fans on a daily basis, but despite this, there were still several things that happened in this issue which I did not see coming nor did I see anybody predict. Yes, Dick fights Joker at Amusement Mile. Yes, Joker talks about how Dick drags down Batman. Yes, anybody with half a brain knows what they will find on the final panel. However, much of the surrounding events came as a surprise.

Sadly, I’m kind of hamstrung in respect to how much I can discuss without ruining the issue. I was glad Higgins did not try to squeeze Sonia into this issue. I hate it when heroes are in a life and death situation but take time for personal drama. I thought the way Joker used props at Amusement mile was a good way to get under Nightwing’s skin, and it added to the mystery of whether or not Joker knows Dick’s identity.

(Spoiler) I also liked that Joker did not slaughter the performers at Haly’s Circus. I was quite afraid that we were going to see an example of bearded women in refrigerators, but no more carneys were harmed in the making of this issue. I despise the casual disposal of supporting characters, so assuming the laughing gas was of a non-lethal variety, their treatment in this issue was a relief. Joker was able to use them to a menacing affect without chopping them to bits.

(Spoiler) In that same way, I am less than thrilled about the destruction of Amusement Mile. I think it was a very clever investment for Grayson, and if that has all gone up in smoke, I’m going to be disappointed. We know at least one Ferris wheel and one roller coaster were destroyed, and it is definitely possible that the main performance area was destroyed or badly damaged. Is that all there is to Amusement Mile, or is there still a lot left standing after Joker’s rampage? Grayson no doubt has insurance, so he should not be financially crippled, but this will have to put a kink in his plans, and if Higgins spent 16 issues building to the creation and opening of Amusement Mile only to have it destroyed by Joker and swept under the rug, will be very disappointed.

(Spoiler) Probably the greatest surprise for me was that Grayson kept on fighting until the bitter end. I’ve been rather disappointed by other members of the family. So far, Red Hood is the only member of the family who refused to give up to the Joker. Red Robin just stood at the bottom of a pit and listened to Joker’s rant, Babs went along with Joker’s crazy wedding plans, Damian refused to fight for fear of killing his dad, and Bats called it quits when he thought his family was in danger. Dick though fought to the last possible second with his last ounce of courage. Good stuff!

Are There Any Editors at DC?

Admittedly, I’m suffering from DotF burnout at this point, but seriously, how the crap does Joker have time to do all this stuff in one night. Ignoring his redecorating, kidnapping, poisoning, and death trapping at Haly’s circus, just consider the grave robbing operation. Joker spent the past year going around the country digging up the graves of old Haly’s performers just to steal their bodies and pose them around the circus? Really? Come on! How long would it take him just to unload all those bodies and pose them? If he had an army of thugs with him, I could somewhat accept this crap, but unless Joker ends Batman #17 by saying, “And I want to give a shout out to my Jokineers for their help,” then I call complete and total bull crap!

Why do all the writers think they need these big over the top setups anyway? Think about The Killing Joke which is generally regarded as the best Joker story of all time. It is a chilling story, but it did not need any ridiculous set pieces to be scary. The most exotic element was an abandoned circus, and really, the story would have been nearly as good set anywhere else. Even though the circus was in The Killing Joke, it is not what is remembered from the story. The scene nobody can forget is when Joker shot Barbara and started taking pictures of her while wearing a Hawaiian shirt. A gun, a camera, and a flamboyant top is all that was needed to create the most riveting Joker moment of history. You do not need a zillion dead bodies and an interior decorator on crack.

Another complaint: why is Dick being so harsh on Bruce? Dick has been more assertive with Bruce in the DCNU, and I approve of this change, but I still think Dick should have a deep trust and admiration for Batman, yet in this issue, he seems completely furious with Batman because it appears he was wrong about Joker breaking in to the cave. The entire dynamic between Dick and Bruce has changed since the reboot, and I really miss the trusting and nearly star struck image Dick had of Batman. Sure, Nightwing has always been one of the few people who can get away with making fun of Batman, but at heart, you know Nightwing had nothing but respect for him. I don’t get that feeling anymore.

Last point before I close, Joker started to talk about Nightwing as being the protégé who abandoned Batman, and Joker tied it into the idea of a young kid running away to join the circus. I thought this was an interesting way for Joker to undermine Dick’s unique relationship with the Bat, but it never really develops past that point. That was a missed opportunity.

This issue is right on the verge of earning a nine, but I’m so sick of Joker doing the impossible in this crossover and there were a few other minor hiccups that dropped the quality a little. Still, it’s a good issue and worth picking up if you are a Nightwing or “Death of the Family” fan.

Jeremy is a new reviewer for DKN, but he also has his own Batman site called BatWatch.net. You can check him out there as well.

Check out some of the panels down below. 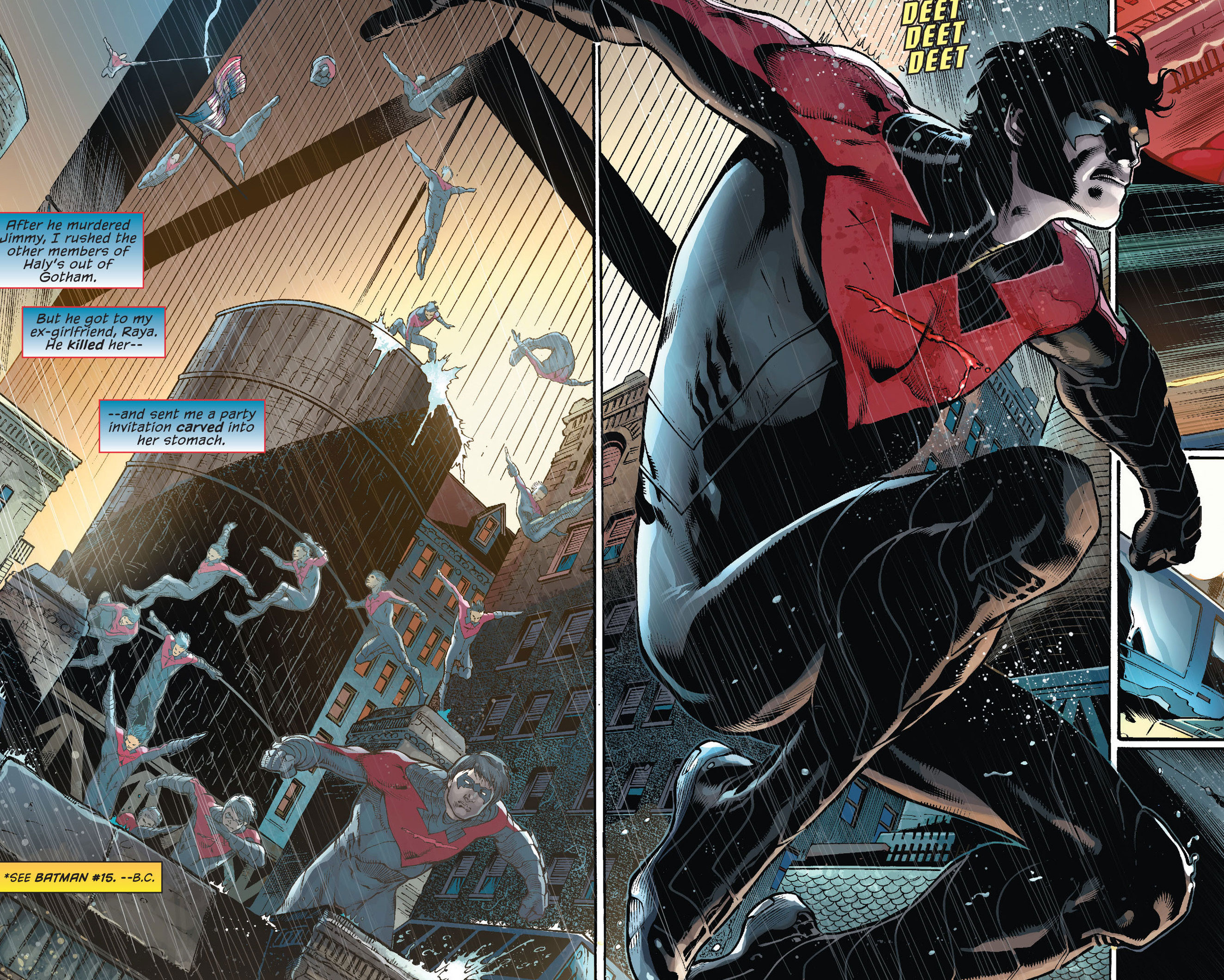 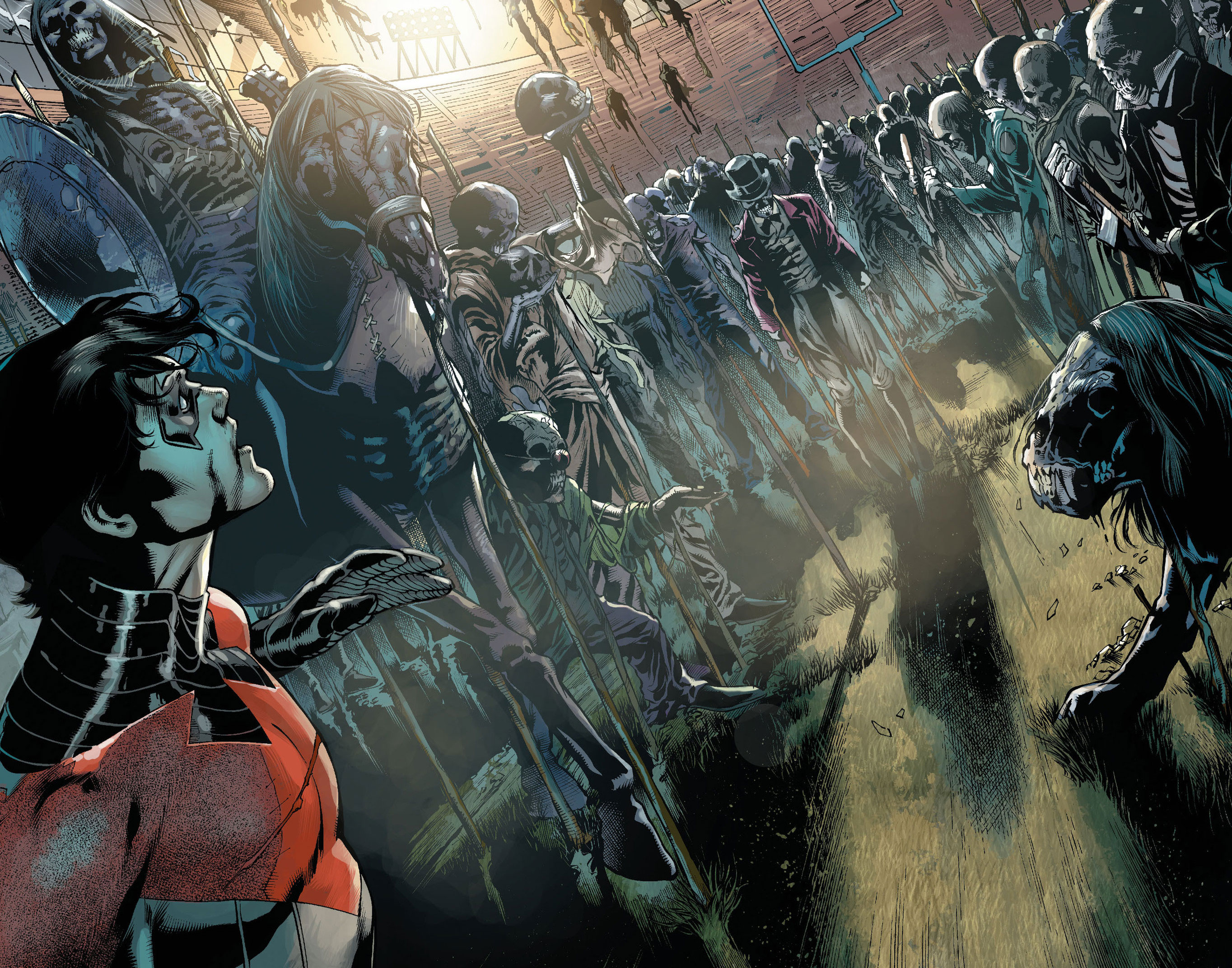 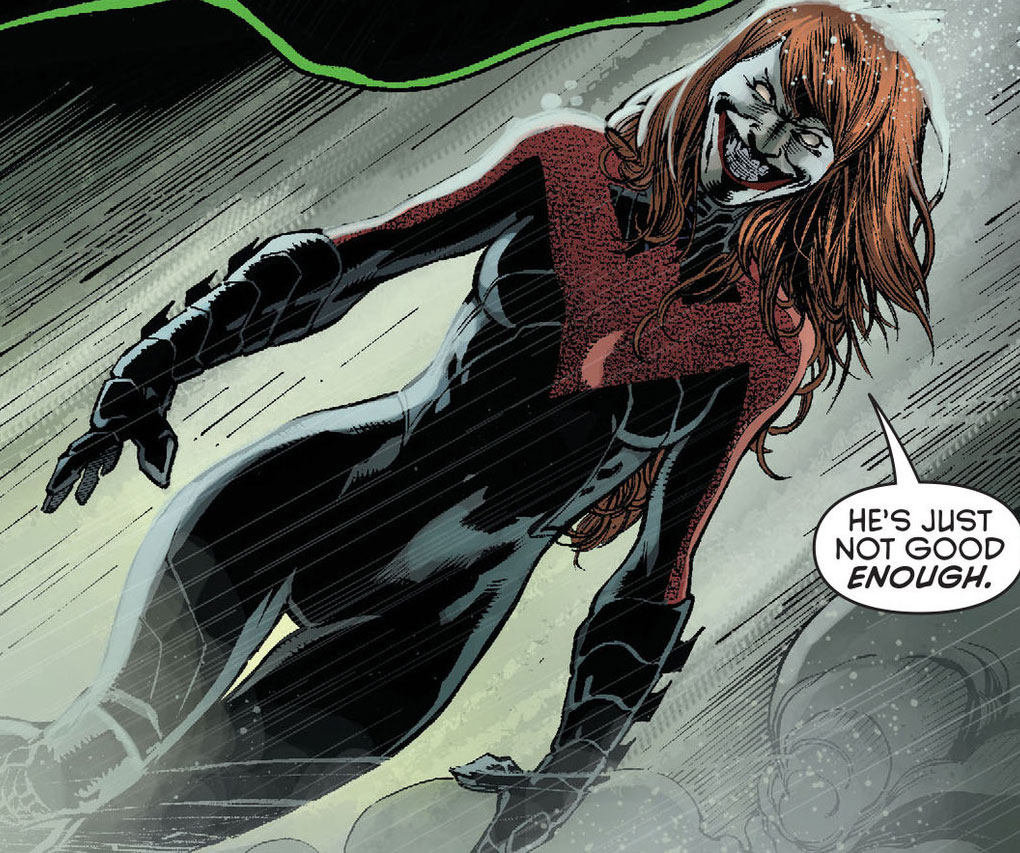 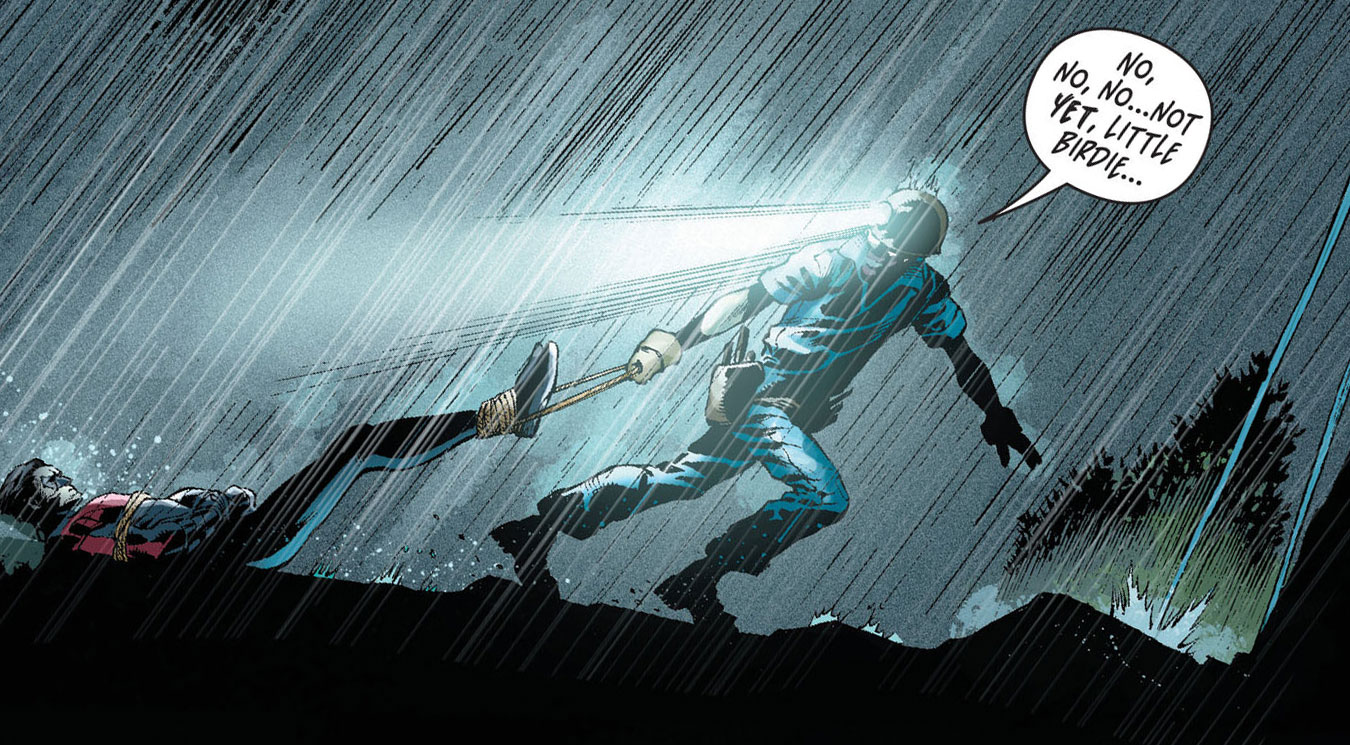 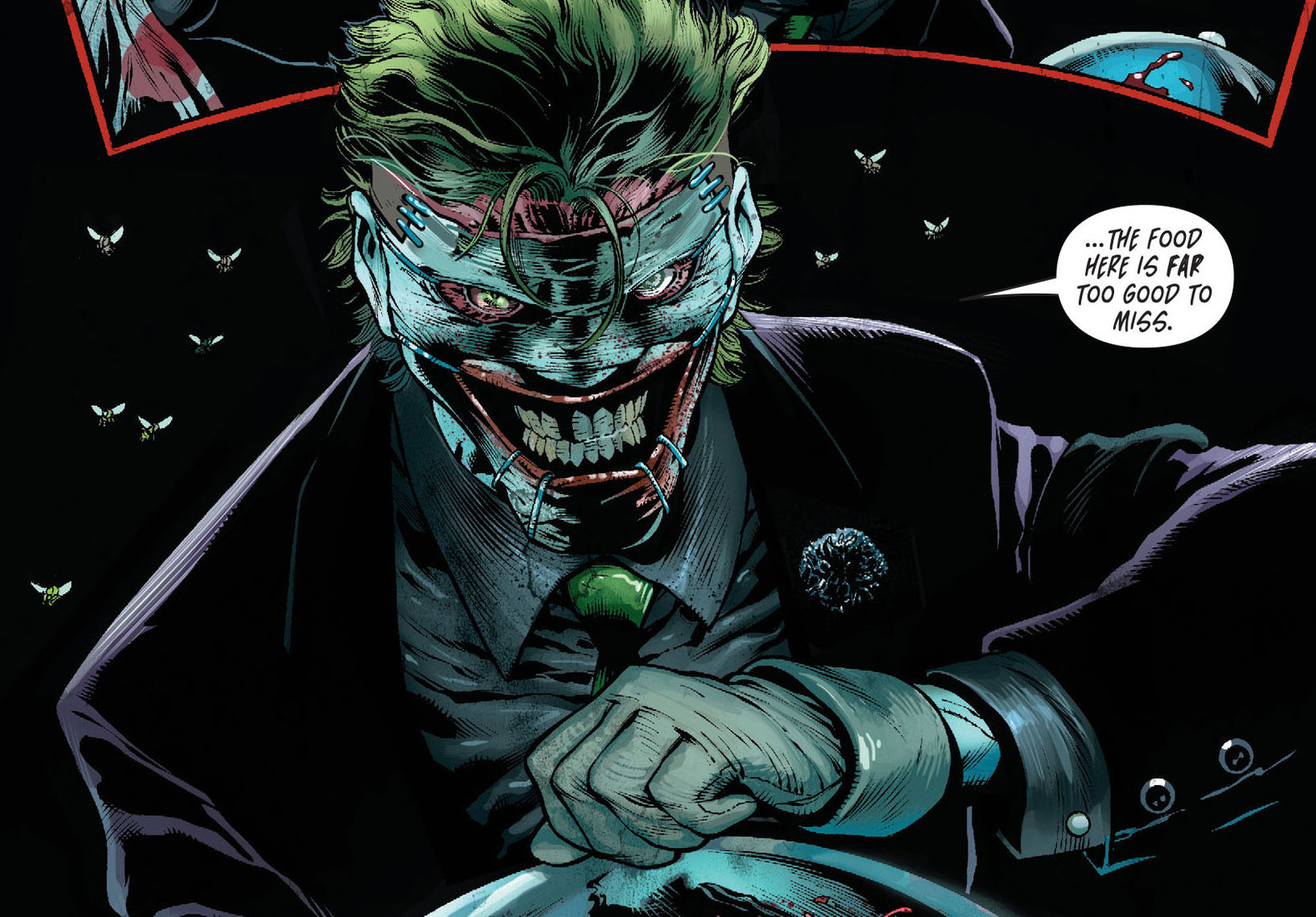