Story Plot: Batgirl is on the hunt for Catwoman – but who is after Batgirl?

Reaction: Gail Simone (writer of Birds of Prey and Secret Six) is currently writing Batgirl since the launch of DC Comics the New 52’s. For the most part, Simone has been developing Barbara Gordon/Batgirl for the longest time for almost twelve issues. It is only recently that Simone has found her footing in this comic book as a writer. Simone is best at writing grouped comic books such as Birds of Prey and Secret Six. Her most beloved comic book by fans is Secret Six. Simone was able to write wonderful dialogue for a bunch of anti-heroes and villains such as Deadshot, Savage Scandal, and Bane. She was able to explore those characters’ personalities and use a lot of adult themed situations that appealed to a more mature audience. Truthfully, Simone as a writer was more at home portraying villains and anti-heroes. Now as  a writer of Batgirl, Simone is trying to simultaneously explore and create her version of Batgirl. However, it seems that even after a year Simone is still tripping up with continuity relating to the other Batman comic books.

Praises: I honestly believe that Gail Simone did well at portraying Catwoman than she has with Batgirl in the last few issues. This is not to say that Simone failed at Batgirl, no, but Simone is better at writing for anti-heroes and bad ass characters. It’s kind of like her calling, seriously. For example, while Catwoman is speaking with the imprisoned Talon. It felt like Simone’s writing flowed nicely in Catwoman’s dialogue as she said “swell or trouble.” It’s probably one of Simone’s best works since the launch of The New 52’s.

She might want to consider taking over Catwoman after Ann Nocenti’s (current writer of Catwoman) run.

As for the two different artists, Admira Wijaya and Daniel Sampere, they have given the best fight scenes by far in Batgirl. What Batgirl has been lacking for the longest time since the beginning is actually decent fight scenes and suspenseful panels. Both have delivered the suspense very nicely throughout this annual. Hopefully, Ed Benes (current artist for Batgirl) will give us more of this artistic style in the next few issues of Batgirl.

Disappointments: On a serious note, why bring the Court of Owls back? The story arc is well long gone. I mean if Simone really wanted to continue the Court of Owls story line, she should have persuaded DC Comics to release this annual over the summer as a concluding story to Batman’s use of the Court of Owls. This is not to say that I am tired of the story line because I really love Talon by James Tynion IV. It’s just that you wait so long to use this story in Batgirl’s first annual? I would say use James Gordon, Jr. who has been lingering around Batgirl for the longest time and has yet to make a move to destroy her. If Simone used him in this annual, it would have made a better first annual for Batgirl.

I have an extreme issue with the timing in this storyline. When I say timing, I mean why would the prison where the Talon is being held notify Commissioner Gordon so late about her presence at the prison? I mean the Talons are such a high profile case in Gotham City that the prison didn’t notify Gordon of her until like weeks later. This did not make any sense to me. Another timing problem is that this annual is not even supposed to be related to the current day of Batgirl where she’s dealing with the Joker. Instead, this annual is set way into the future of Batgirl. I would say that this annual is after “Death of a Family” story arc. How would I know this? Well, Catwoman will be leaving Gotham after “Death of a Family” story arc and will be part of Justice League of America. SPOILER ALERT: This means that she’ll be having a relationship with Green Arrow since he is part of the team. If you read this annual, you have picked up the subtle banter between Batgirl and Catwoman. In which, Batgirl asks Catwoman if her relationship with Green Arrow is true? Catwoman does not really answer the question but tells Batgirl this, “Funny, but that does remind me…that a bullwhip has some non-recreational use as well.” The statement does not confirm much, but it does provide a innuendo of her relationship with Green Arrow. In the current Catwoman storyline by Ann Nocenti, Catwoman has not even met Green Arrow yet nor joined Justice League of America. So, Simone has given away some spoilers for Justice League of America which will be out in January 2013. Another spoiler that this annual has presented is that this Talon might be the next member of Birds of Prey. Towards the end of this annual, you will that indication on the last page at the bottom. This annual is set in the future.

Now, the artwork by Admira Wijaya and Daniel Sampere had its grand moments. However, I feel that they were a bit sloppy at some panels including the design of the characters in this annual. Before, I get into this I must say that the pastel coloring of this annual really wasn’t necessary. I believe that Admira Wijaya colored this annual because there is no colorist named in this annual. The credit goes entirely to Wijaya. The coloring does not flatter the design of Batgirl nor Catwoman. The coloring made Catwoman look older than she is supposed to be like border lining late 30’s. She is definitely much younger than she appears in this annual. I already dislike Catwoman’s costume since the launch of The New 52’s, but now I loathe it. All thanks to Wijaya’s decision to use pastel coloring.

Wijaya does not really take all the blame in the annual, Sampere put the cherry on top of this annual with a lot mistakes. He poorly designed Batgirl and Catwoman like really poor. He portrayed a lot of over exaggeration in the facial features of both characters. A shocked expression by Batgirl when Catwoman brushed off Batgirl’s hand from her shoulder, it was really over done. Both characters looked like they aged in the face.

The timing of this annual is at best horrible. I do know that there are some readers who do like this annual. I feel that this is such a disappointment for me. I do know that Wijaya is applying art to this annual, but it does not work for me. It’s truly sad that I couldn’t appreciate this Batgirl Annual at all. 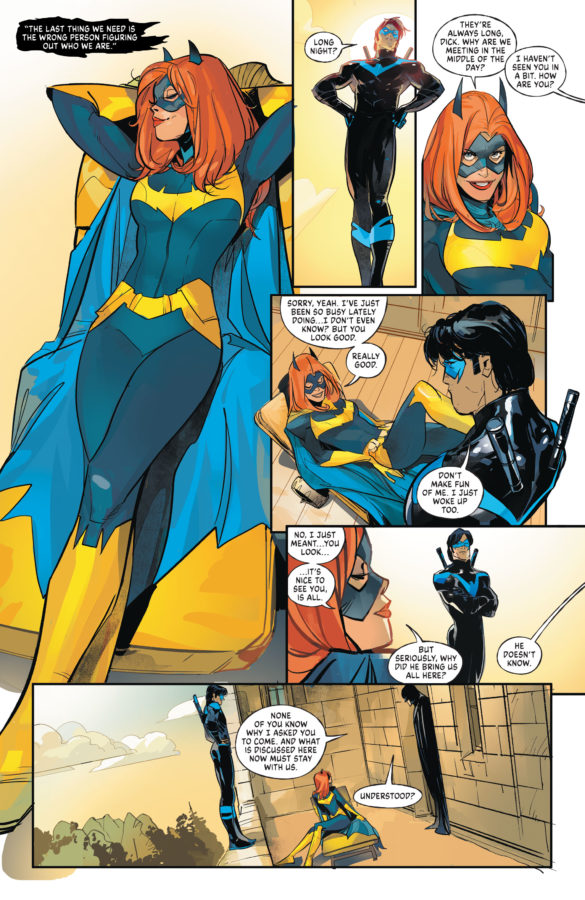 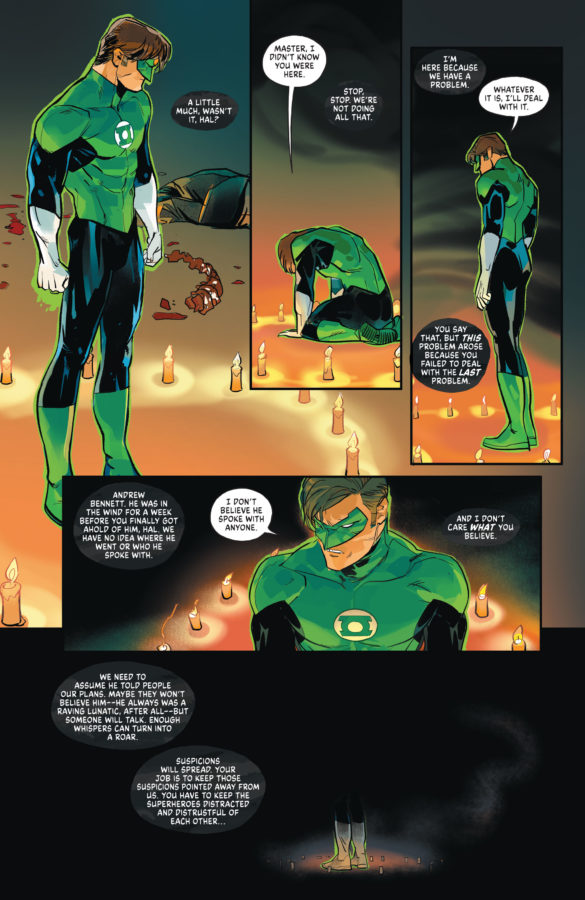 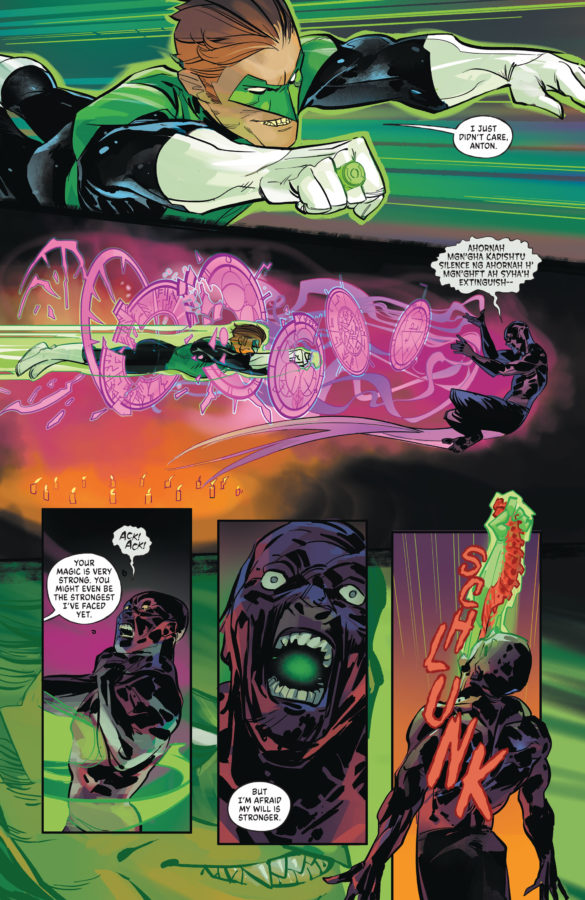 FIRST LOOK AT HUNTRESS ON ARROW