Since all of September is the Issue Zero Month, there is a feature for those who are just getting into the Batman Comics. It’s the Who’s Who in The New 52’s feature. The Who’s Who shows a brief profile and description of characters in the Batman Comics such as Comm. James Gordon who is one of the top characters in the Batman Universe and who is also highly beloved by comic book readers. It is a small feature that will be found at the back of the zero issue comic books for all of this month. Hopefully DC Comics will continue this small feature since there are tons of new comic book readers who are eager to be informed of the major Batman Universe characters.

Here are some brief details of characters that were found in this week’s Batman Comics. For more on the character please click onto the HERE to be redirected to DC Comics profile of that specific character.

David Zavimbi was born in Tinasha, a city inside the Democratic Republic of Congo in Africa. In addition to being a trained soldier and police officer with excellent hand-to-hand fighting skills, Batwing also wears a combat suit designed specifically for him by Batman.

Jim Gordon is an incredibly brave and determined police officer and detective. James Gordon is no ordinary man. A cop dedicated to doing things the right way, and a relentless social worker, Commissioner Gordon has been instrumental to Gotham City’s survival.

Helena Wayne (AKA Robin, the daughter of Earth 2’s Batman and Catwoman) battled alongside that planet’s heroes against the massive armies of Darkseid. Huntress was trained by Batman of Earth 2 in combat skills and as a detective.

Earth 2 is a parallel version of our Earth that exists in an alternate dimension as part of the Multiverse. The planet’s history is almost identical to ours up until the time of Darkseid’s first attack on the planet. After this event, Batman of Earth 2  dies and Robin (Helena Wayne) escaped to The New 52’s to live her life as Huntress. 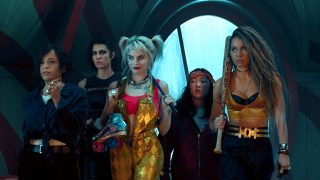