I thoroughly enjoyed reading Red Hood & The Outlaws #12. I really wasn’t digging the outer space atmosphere at all. Scott Lobdell (writer) has finally got me good with his comic book. I loved the whole human aspect of the characters where they’re all feeling unsure of their current situation. Jason Todd is definitely still his cocky impulsive self, but nowadays he’s becoming more of an understanding character who will still shoot you just because he can. However, there was little of Jason Todd (Red Hood) in this issue. The issue focused more on Kori and Roy who are basically each other’s love interest or at best, friends with benefits. I wasn’t too taken with Roy at first, but his annoyance is starting to subside as Lobdell is allowing the characters to show their insecurities. It was a long way coming from Lobdell to allow the characters to become relatable in my opinion. In the last few issues, I found it hard to get into this comic book due to the controversy that arose from the blatant and unapologetic use of Kori as a sex symbol. I’m starting to see the horizon of this comic book as being enjoyable again.

I must say that the comic book has improved a bit since Kenneth Rocafort (previous artist) left. I know that many Red Hood fans are disappointed with the art change. I will say that Timothy Green II has good decent panel work for Red Hood and the Outlaws. Unlike Rocafort who used tons of panels to illustrate both action and dialogue throughout the comic book. I find Green’s art direction to be subtly conventional allowing readers to get through the dialogue peacefully and exciting the readers when the action started. I do think that Green’s facial expressions of the characters are a bit odd. It seems that Green does well with alien faces than he does with human faces. So, if and when the Outlaws leave outer space will Green suck afterwards?

I love how the issue related to Star Wars because I found that quite funny throughout the issue. Lobdell is a funny guy and it shows in this issue, quite enjoyable. I would like to think that Jason Todd is our Han Solo because he carries guns and is a total bad ass rogue fighter. However, I think Roy and Kori fit the Han Solo and Princess Leia couple thing. If I had to name Jason Todd a Star Wars hero, I would say Luke Skywalker but I’ll make him more of an Anakin Skywalker because he is more bad ass than Luke any day.

Check out some panels I thought was cool down below.

Are you still a Rocafort fan or did you like Green’s artwork in this issue? Who would you think Red Hood is more of? Han Solo, Luke Skywalker, Anaking Skywalker, or another favorite outer space character of your choice? Comment down below, DKN Facebook, or DKNewsCom. 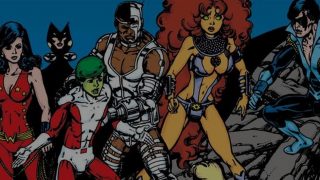