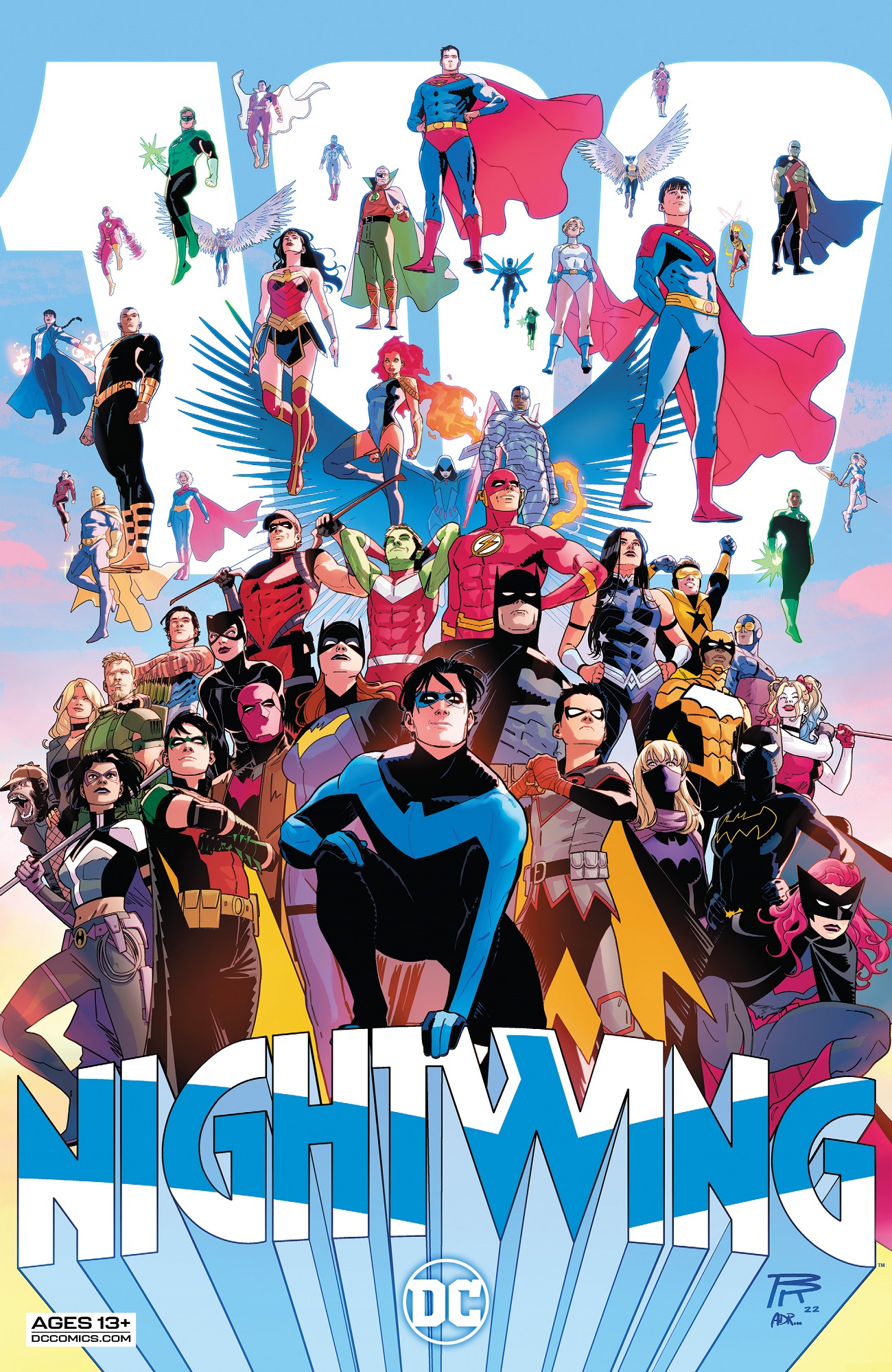 Last week we gave Dick Grayson fans a sneak peek at some of the gorgeous covers that will be adorning the landmark Nightwing #100. I read the book a few weeks ago and now it’s here, I can finally share my joy with the world. 2023 may have just started, but this issue is already a contender for comic of the year.

I’ve been saying it for decades now; Dick Grayson is the beating heart of the DC Universe. Hey, don’t take my word for it, Batman, Superman, Wonder Woman, the Titans, Barbara Gordon… they agree. This wonderful issue proves it, as all those heroes make an appearance. Of course, with so many crime fighters in one book, you know the action’s going to be full-on. Thankfully, the creative team that put this masterpiece together knows that there’s more to comics than just action.

With Nightwing #100 Tom Taylor has given us one of the single most powerful, emotional, and beautiful Batman/Nightwing / Bruce Wayne/Dick Grayson moments in comics history. My previous favorite was from Robin #13 (1995), the final chapter of Batman: Prodigal” in a sequence written by Chuck Dixon and drawn by Phil Jimenez. Anyone who remembers that issue and loves it as much as I do will lose their mind about what happens in this one.

Let me just get that dust out of my eye…

Perhaps it’s apt, or maybe it’s just creative genius that Nightwing’s new nemesis, one that’s been cleverly tied to him since he was a child, is called Heartless. One of these men is a hero, the beating heart of a city, and an entire fictional universe. The other is a cold, emotionless killer who steals the hearts of his victims. This is truly wonderful storytelling.

Speaking of… if you’ve taken more than a cursory glance at the credits for this issue, you’ll see the names of several Nightwing luminaries; Rick Leonardi, Eddy Barrows, Javier Fernandez, and Mikel Janín, have all drawn Dick Grayson’s adventures in the past, as both a costumed crimefighter/superhero or as a secret agent. Seeing their work on these pages makes my heart sing.

Then there’s Nightwing legend, Scott McDaniel. Having spoken to and interviewed Mr. McDaniel I can tell you that he’s as great a person as he is an artist. His was amongst the first versions of Nightwing to move like a blur across the pages of every issue he appeared in. This is the artist that made every character, even those in the background emote and matter just as much as the main protagonists. He does it again several times in this issue. Look out for the prisoner who clearly is having a tough time deciding whether to don a mask and join the criminal riot, or just walk away. Check out Heartless’ interactions with the KGBeast, and the face on the latter as he takes his costume from Heartless’ hands. All of it is pure magic. 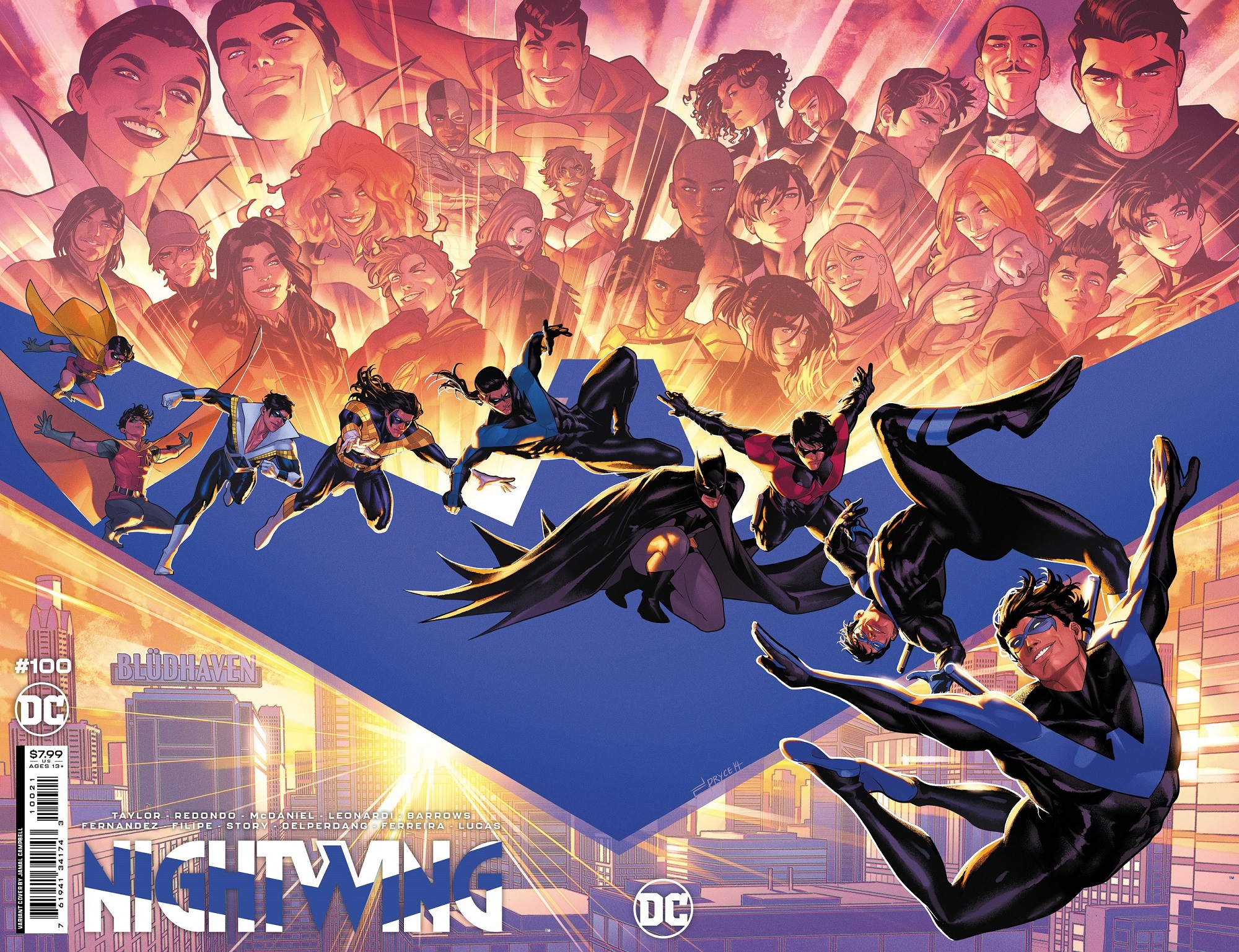 Nightwing #100 needs to be on every comics fan’s pull list this month, whether they collect this series or not. This is a book that has everything. Action, emotion, heart, revelations, and Nightwing finally receiving the respect he richly deserves. This issue isn’t just part of a stellar Nightwing run, it even works as the perfect denouement to the recently concluded epic, Dark Crisis on Infinite Earths.

If you’re a Dick Grayson fan, a comics lover, an aficionado of the Batman Family, a lifelong follower of the Justice League or the Titans, you need to buy this comic.