DC Collectible Comics (DC3) continue to identify the greatest hits of landmark comics with the announcement that The Brave And The Bold #28, featuring the very first appearance of the Justice League, is the latest comic to be made available as an NFT edition. Joining the ranks of Superman #1, Detective Comics #38, and Crisis on Infinite Earths #1, you now have the opportunity to own a share of unique digital editions of The Brave And The Bold #28 NFT. And, once again, you can even select the condition of the comic as represented in the images.

When the issue came out at the end of 1959 (cover dated March 1960), it was the beginning of The Silver Age of comics. The end of the Golden Age in the mid 1950’s had been a precarious time to be a superhero. DC were only publishing three superheroes in their own titles; Batman, Superman and Wonder Woman. The Brave and the Bold had been created as an anthology title featuring non-superhero characters such as Robin Hood, but by #28 DC editor Julius Schwartz had asked writer Gardner Fox to revive the idea behind the Justice Society of America.

However, Schwartz disliked the social club association with the term Society and preferred the word League which, he felt, youngsters would recognize from sports teams. The mission was to reintroduce super-hero characters from the Golden Age and with The Brave And The Bold #28 Schwartz and Fox had a masterstroke idea in the formation of this new team.

The idea was simply that this first published adventure of the team would not actually be their first adventure. So when the threat is established in the story, and a call to arms goes out to the team-members including Batman and Superman, they are shown as being too busy to attend (Batman’s brief appearance is rather ironic considering the title eventually became exclusive to him from #59).

There’s no who’s-in-who’s-out recruitment process, just straight into the action safe in the knowledge that the Big Two are already signed up. It meant that Aquaman, The Flash (who was already proving to be popular in the Showcase title), Wonder Woman, Green Lantern, and Martian Manhunter were given a chance to shine. And shine they did, as a couple of issues later, The Justice League were given their own title for adventures, and the rest is history. 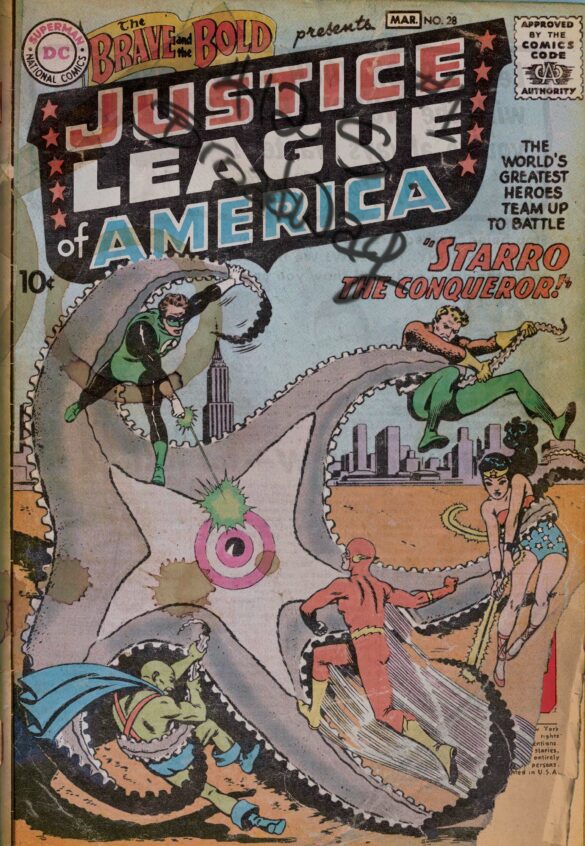 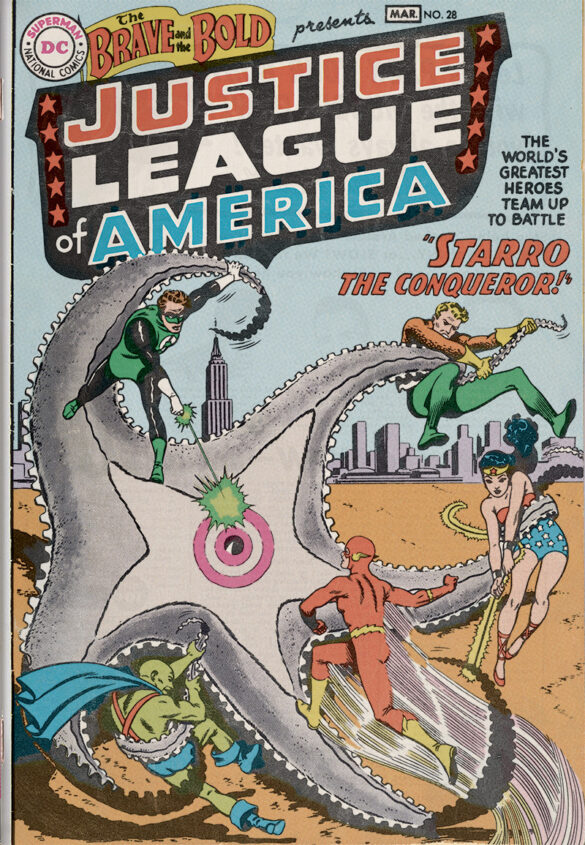 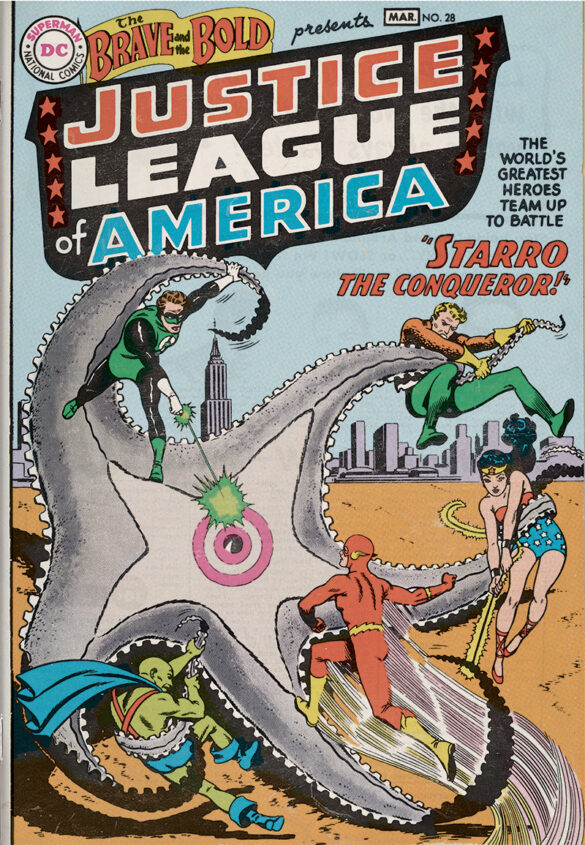 The “firsts” don’t stop there, however. A hero can only properly prove their worth against a formidable villain, and in the case of Starro The Conqueror, it has somewhat improbably endured right up into the recent DCU movies. Based on the science fiction literature of Ray Cummings, Starro taps into old monster-from-space sci-fi troupes as employed by Alan Moore for Watchmen, but also, with its cloning and mind control abilities, proved to be an affective dramatic device for DC stories for decades to come.

Of course if you really want to delve into obscure DC history, this issue features the first appearance of Lucas “Snapper” Carr. What do you mean, you’ve never heard of him? DC never could resist a sidekick and for fifteen minutes of fame Snapper was the JLA mascot.

Having previously illustrated romance and science fiction titles for DC, Mike Sekowsky was brought in for The Brave and the Bold #28 and once the JLA moved into its own series, he illustrated over sixty issues seeing the introduction of Hawkman, Green Arrow and Atom. It’s safe to say he gave the title its founding look and tone. That now iconic cover was illustrated by Sekowsky and inked by Murphy Anderson.

Earlier in 2022 a CGC certified 9.6 copy of Brave and the Bold #28 was bought for $750,000, which not only set a new record for the comic but made it the highest-selling DC comic from the Silver Age. DC3 NFT editions offer you a share of the digital equivalent of a unique issue starting at just under ten dollars, though you can choose a condition to the digital image based on budget and preference. Limited to 4,000 units, go to nft.dcuniverse.com for availability.

This week’s issue features the first appearance of The Justice League of America! When Starro the Conqueror arrives on Earth intent on enslaving humanity, it’s up to the DC Super Heroes of the world to band together and defeat the evil alien.