Crisis On Infinite Earths #1 NFT is the latest digital comic to be added to the growing long box of titles at DC Collectible Comics (DC3). As of December 15th, 2022, you now have an opportunity to own a share of a unique, not-to-be-duplicated digital version of this classic comic and, just like previous releases Detective Comics #38 and Superman #1, you even get to choose the condition of the cover image.

Published on January 1985, it’s difficult to understate the significance of COIE. Heading into the 80s DC was looking to make a change. Sales needed to improve, and editor Marv Wolfman was noticing letters from fans complaining about mix-ups in continuity across the multiple universes. He proposed a change – a unifying of the multiverses that would be established in one maxiseries encompassing virtually every single character in the DC stable.

From the moment The Comics Journal reported on the proposal in 1981, it took a further four years for the series to be published, including the two years it took one researcher to read every DC comic in the vault – and to think, someone got paid for that!

Quite simply, the task was unprecedented. Marvel had just beaten DC to the post with their own first event maxiseries entitled Secret Wars (starting mid-1984), but it was nowhere near the same scope as COIE, either in terms of characters or significance.

Marv Wolfman created a story that drew upon the history of the DCU and dutifully filled it with every character. It was a story of high drama, infamously seeing the death of two high-profile characters and many other secondary ones. Illustrator George Perez faced one of the highest challenges of anyone in comics bringing his interpretation of so many characters where every detail is significant. It was also a project that tested his technical ability in terms of clear layouts and dramatic storytelling. 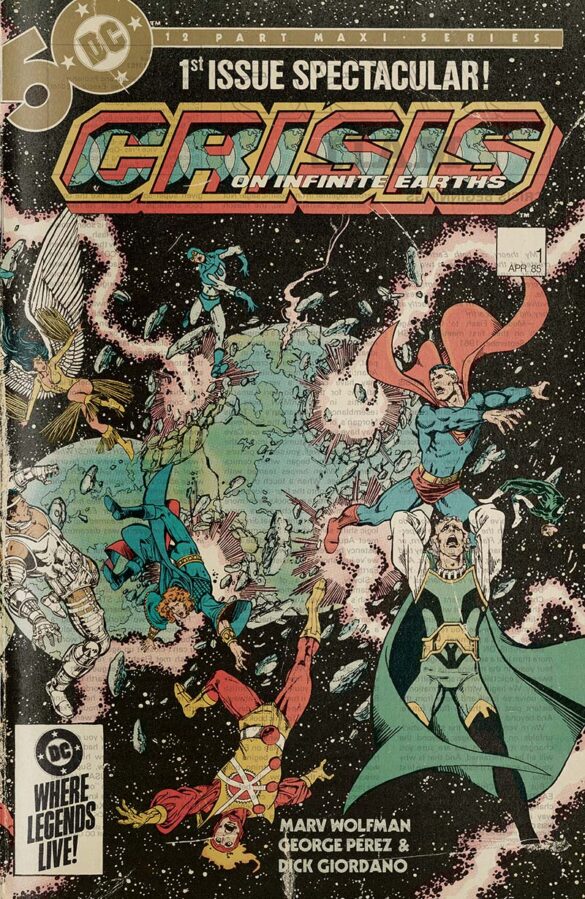 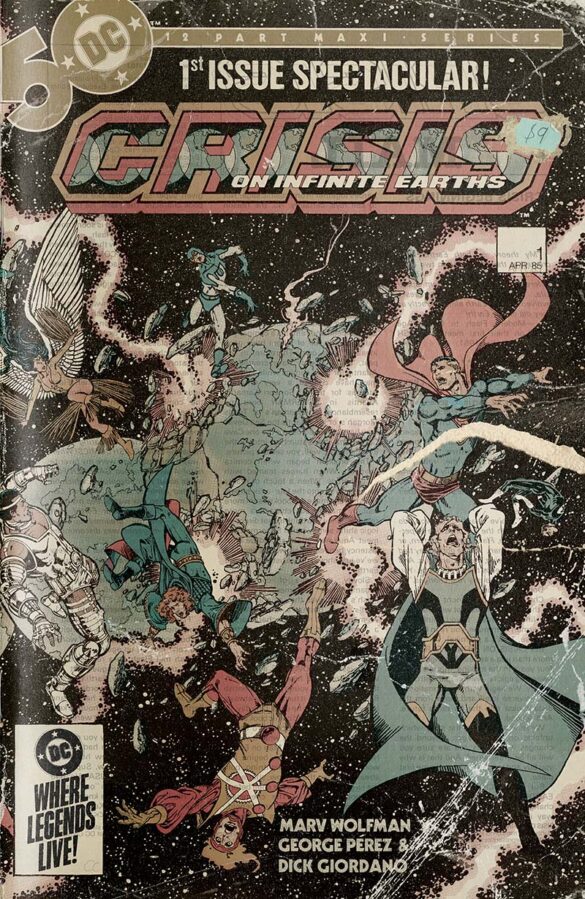 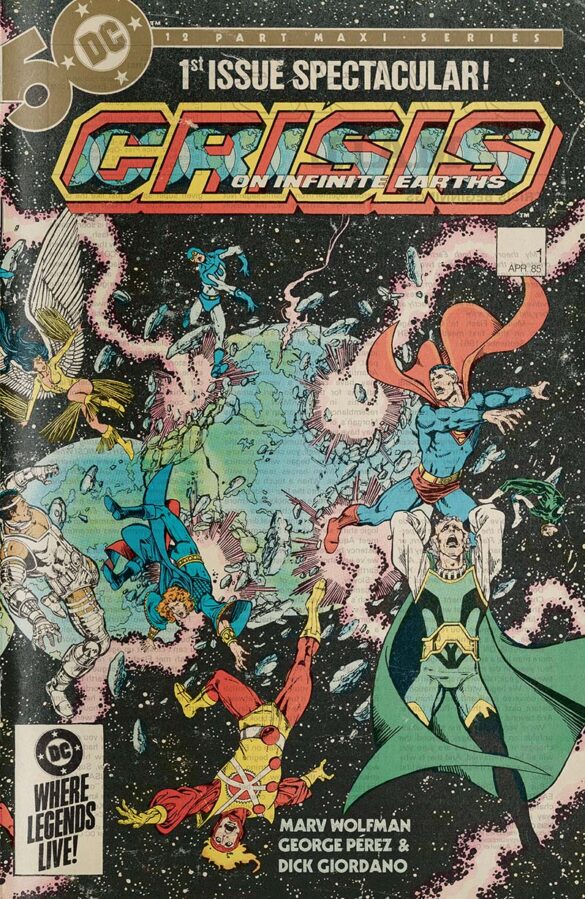 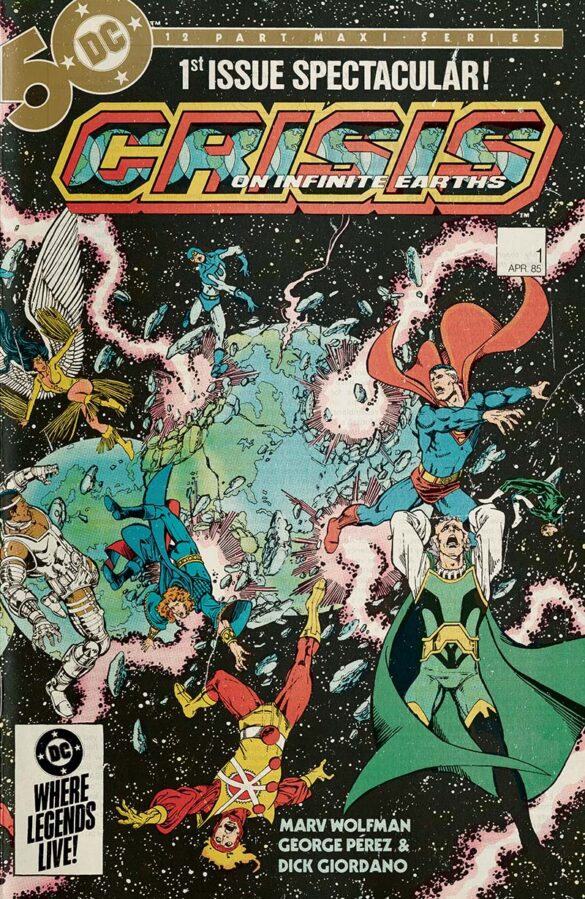 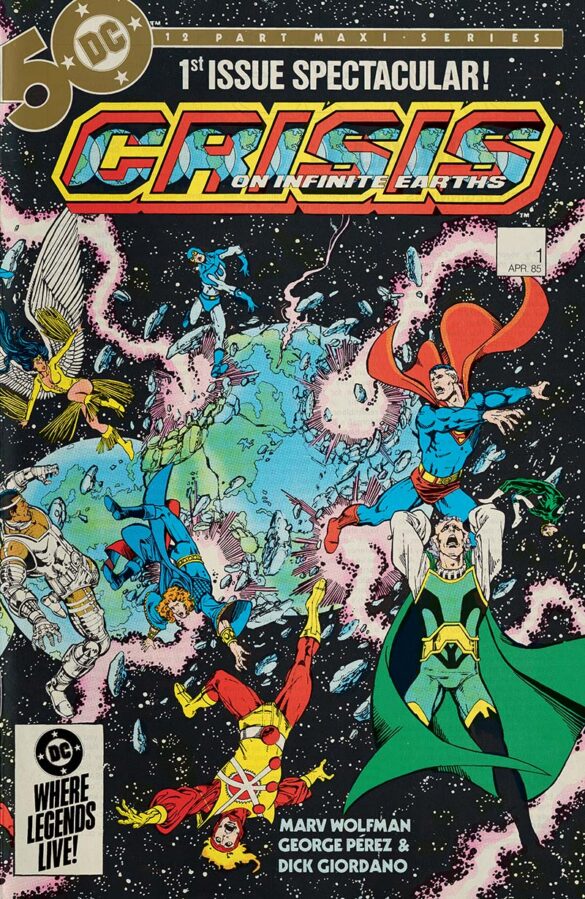 Even now its significance within comics history is appreciated. 1985, which COIE ran through from January to December, is noted as the beginning of The Modern Age of comics. Readers and comic creators were looking for a grown-up sophistication in the art form, with darker, more adult storytelling. Superheroes had to change too.

In a twist of fate, what had started as DC responding to changing needs had led to them publishing a superhero comic that displayed a new level of ambition. It showed the comic world, including Marvel, that it was possible to tell a story that encompassed decades of characters and storylines and was brave enough to turn everything on its head. It also allowed their characters to be reinvented to better reflect modern times. Batman had already been going through a change-or-die reinvention leading into COIE and was one character that didn’t need a reboot, but even he benefitted from retcon with the immortal Batman: Year One.

So what better way to associate yourself with a piece of not just DC significance, but comic history? The Crisis On Infinite Earths #1 NFT digital asset is divided into just 4,000 ownership slices and comes in a choice of cover conditions. Get it while you can at nft.dcuniverse.com

When DC’s Big Bang occurred in Crisis on Infinite Earths, multiple parallel universes were formed. A great wall of pure antimatter energy stretches out across the cosmos destroying entire multiverses. Earth-3 is about to reach the end of its existence because of this, and not even the DC Super Heroes of that earth can save it.

‘Multiversity: Harley Screws Up The DCU’ Releases This March