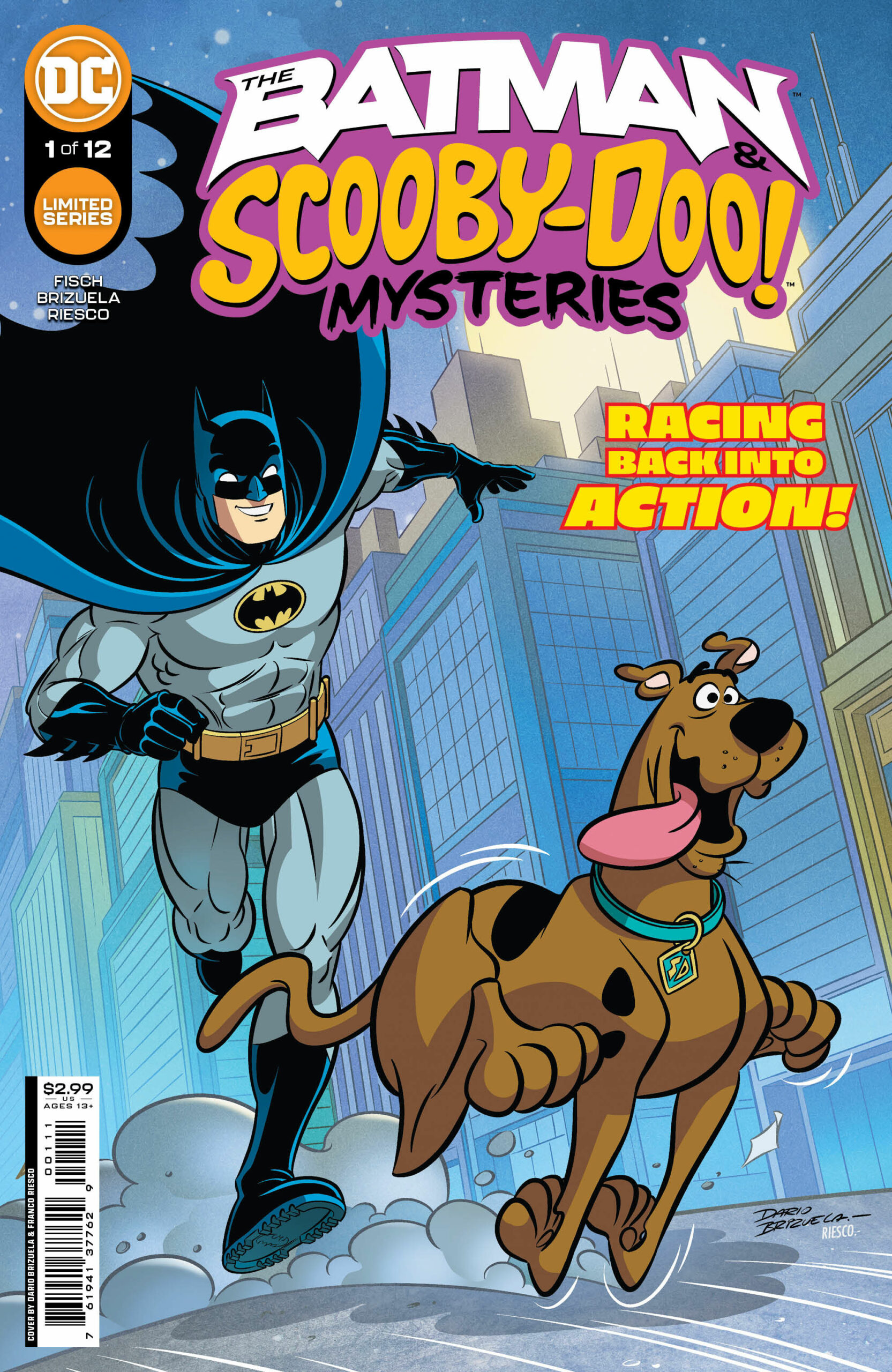 The Batman and Scooby-Doo Mysteries #2.1 starts with a bang! Not only is the team ready and raring to go, but a few familiar faces resurface right at the start. Read on to find out more about this year’s first issue of the series.

Here we go again! While our favorite crime solvers got a few months off, Batman and Mystery Inc. are back in another 12-issue run solving crimes and hijinks together. This year’s series doesn’t seem like it’s going to bring too much new to the table, but there’s not much point in messing with the classics. 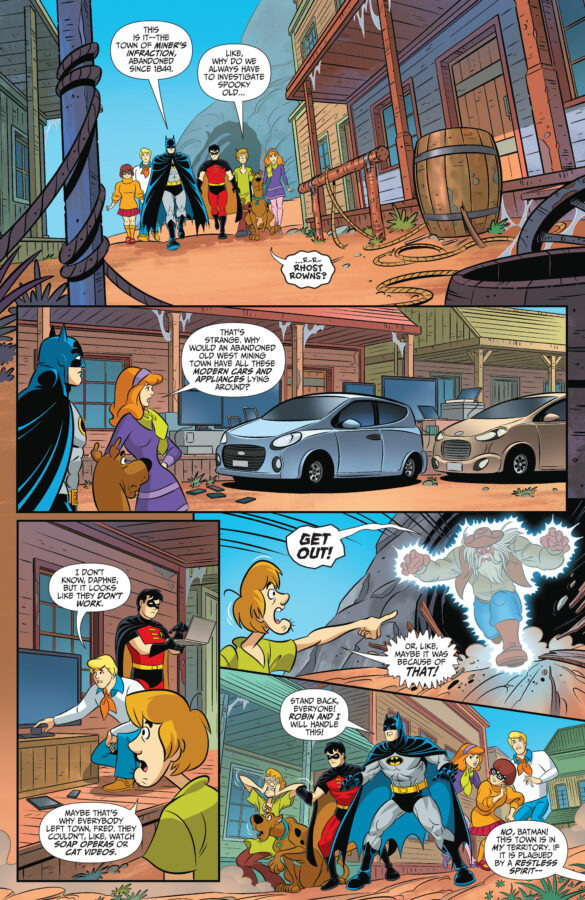 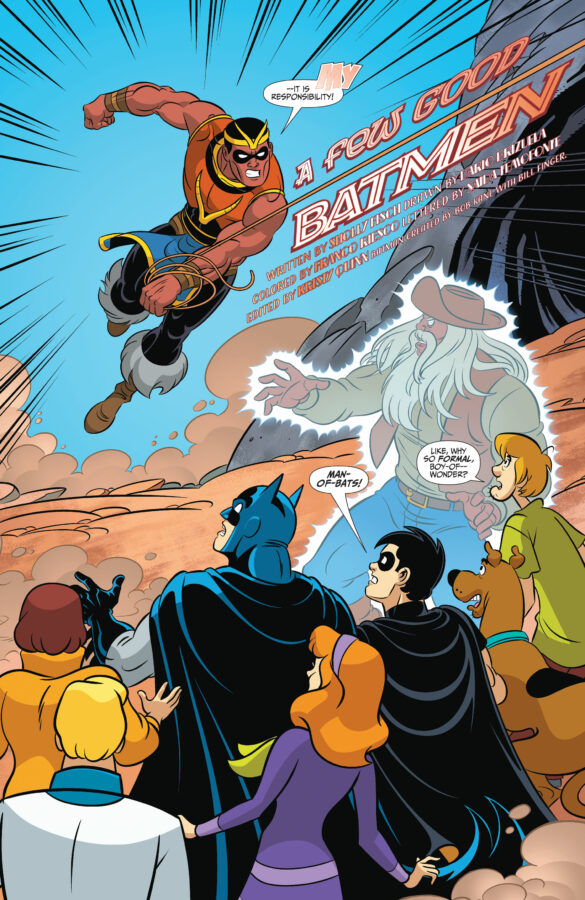 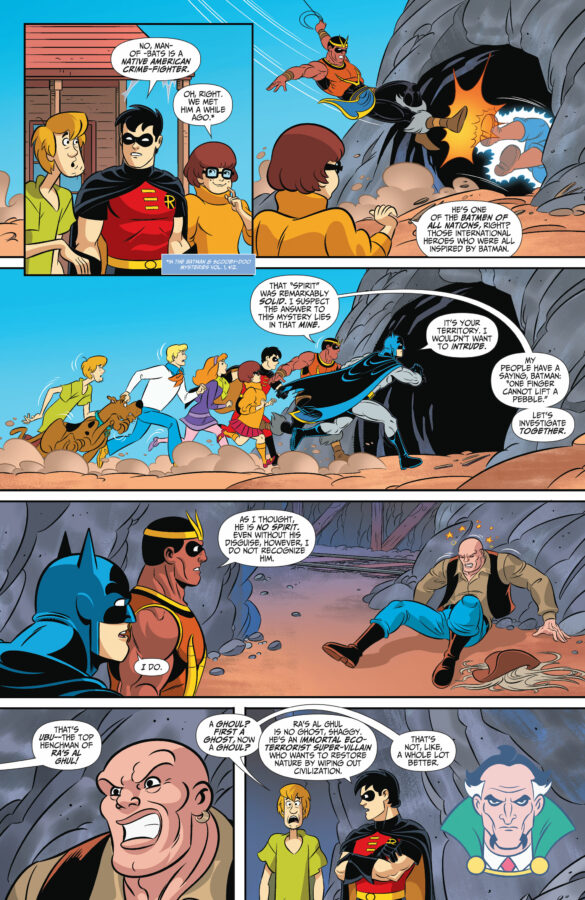 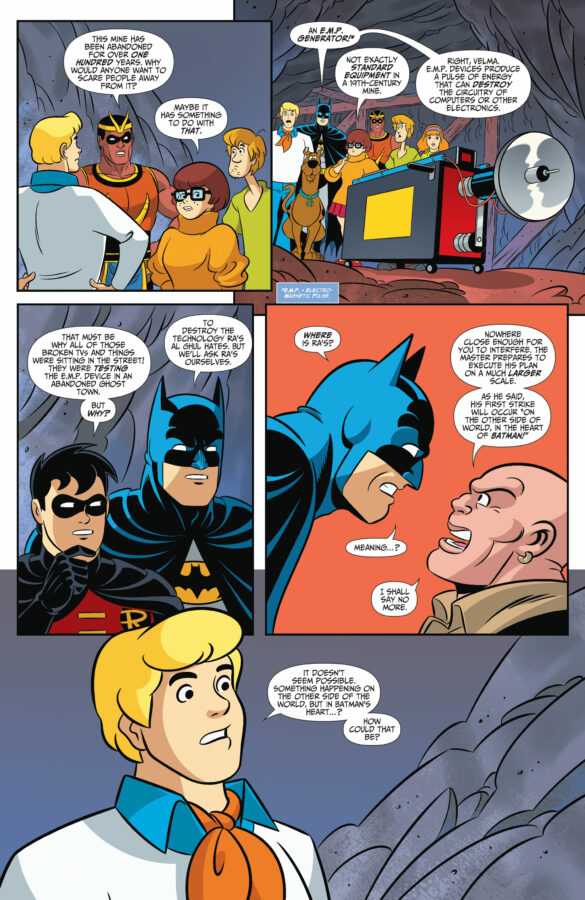 In the last issue of The Batman & Scooby-Doo Mysteries, The Caped Crusader teamed up with some of the heroes he had inspired around the world, particularly the Batmen of All Nations. This issue sees several of these global Batmen returning to the page. Man-of-Bats, The Legionary, The Musketeer, Wingman, The Ranger, El Gaucho, and The Knight and Squire all get appearances, some more than others.

Mystery Inc. and Batman and Robin help several of these vigilantes defeat local baddies throughout the issue. This allows the Mystery Gang to travel all over the globe to try and solve mysteries. Several cheeky nods to Bruce Wayne (such as his private jet) were made throughout the comic once more. At this point, I’m not entirely sure that Velma hasn’t figured out Batman’s secret identity. We’ll see if anything comes of that though!

Back to the Batmen of All Nations. While there isn’t much female representation in the group, it’s still nice to see stories being written about superheroes outside of America. This kind of representation can be really helpful for kids growing up reading comic books to see themselves on the page, but this issue wasn’t perfect in that regard…

As I’ve stated before, the inclusion of different Batmen around the world is really cool and honestly opens a lot of doors for other creators and representation. There are ways to do this however without being insensitive to different cultures and I feel that The Batman & Scooby-Doo Mysteries #2.1 fell a bit short of that.

Particularly of note was the handling of the two Batmen who are people of color, Man-of-Bats, and El Gaucho. Man-of-Bats is a super cool character to include in this issue’s lineup and it’s awesome to see Native American representation in a comic book. However, his disguise involves him either being painted bright red or having bright red skin. This ties into Man-of-Bats’ previous comic book costumes. However, this makes you wonder how and why creators would make the character look like that in this day and age. Previous stereotypes about Native American people and their skin color have been harmful and this seems to fall into that category.

As for El Gaucho, I’m concerned about his costume, appearance, and his name. Despite being Argentinian and a character in his own right, El Gaucho kind of just looks like Batman with a little mustache drawn on his face. Shouldn’t the two vigilantes look a bit different from each other? I also think El Gaucho’s name is a bit peculiar since a gaucho in Argentina is just a particular kind of cowboy. How do the fictional citizens of El Gaucho’s city differentiate between referring to him and a regular gaucho? Is his case helping a rancher while on horseback a bit too on the nose considering his name?

I do appreciate that the creators of The Batman & Scooby-Doo Mysteries do seem to be working hard to make new stories and content this time around. The art style looks familiar but still fresh and not like they’ve recycled previously used comic frames. The story is interesting enough to keep your interest for the brief issue and all of the characters seem to match what we expect from them.

I feel however that if the creators wanted Ra’s al Ghul to be the main villain of the issue that he needed to be featured more, or at least have less time spent on the other Batmen of All Nations’ cases. These other stories are fun, but ultimately feel like they detract from the weight of Ra’s as a villain.

Mystery Inc. also still has yet to face off against one of its own original antagonists. I don’t have high hopes of this happening since none of them really lasted, either on TV or in the last series, but why not? It would be fun to have some banter about meddling kids or old man Jenkins with Batman standing there awkwardly being the comic relief. This scenario would certainly beat the opposite. 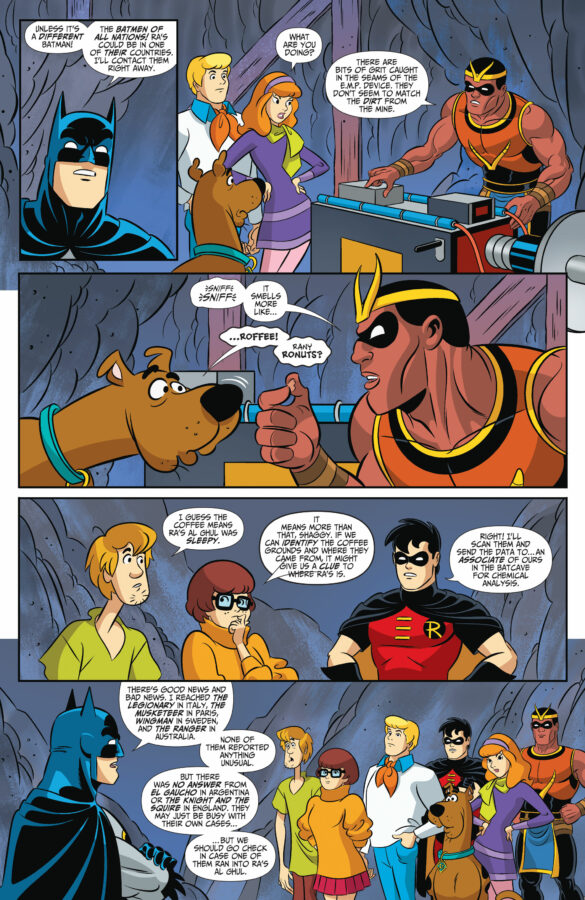 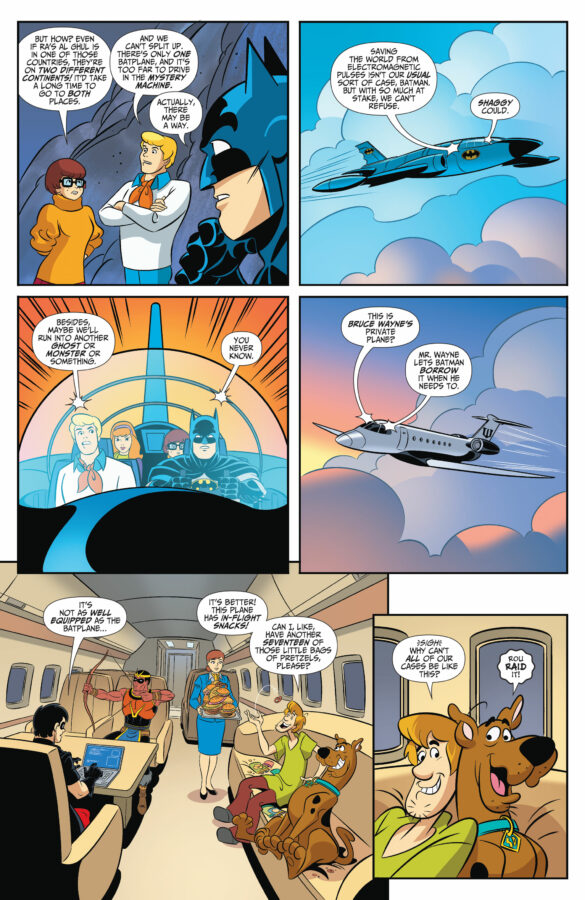 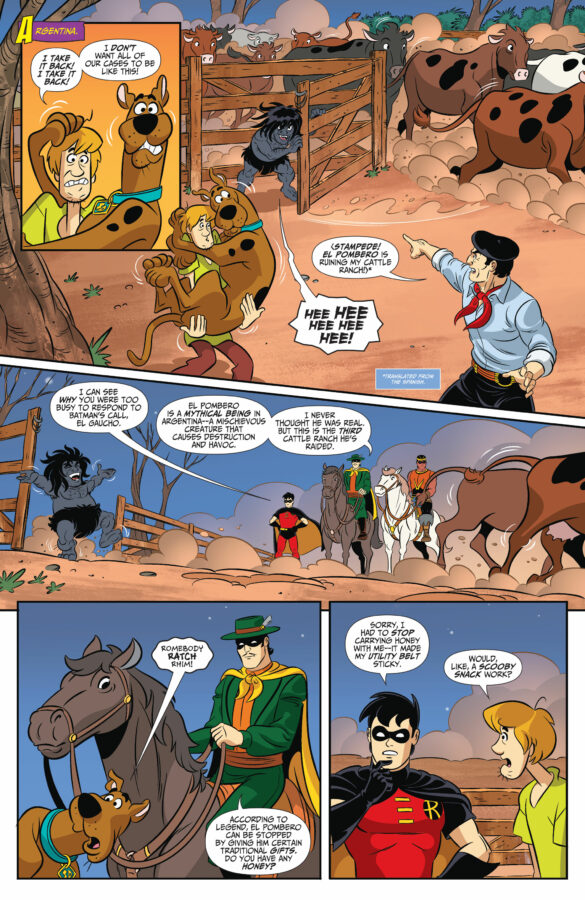 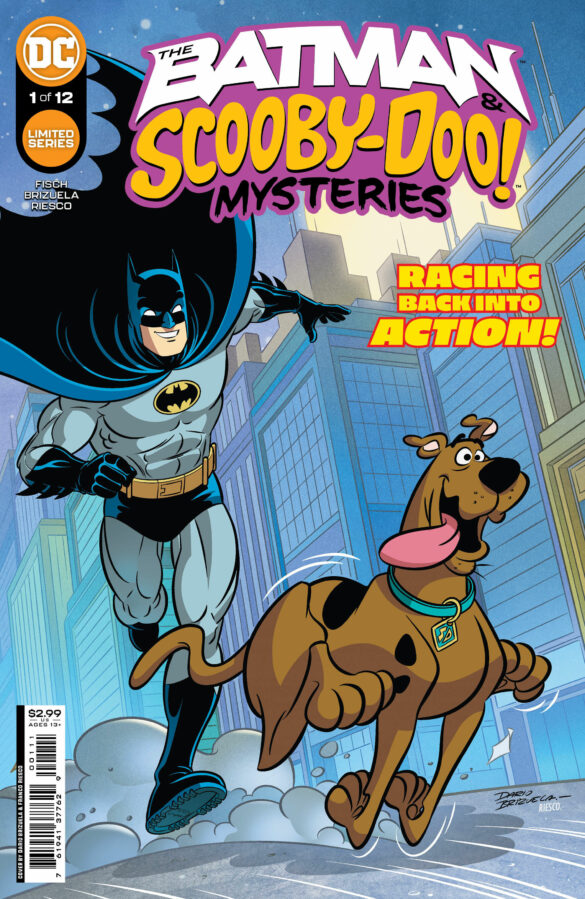 There’s nothing really wrong with The Batman & Scooby-Doo Mysteries #2.1, but there isn’t anything very exciting to see in the issue either. More characters are included and we get one more female crime fighter than usual, but it’s otherwise more of the same as what we’ve seen before.

Batman irresponsibly calls in more teenagers (brilliant though they may be) to help solve his cases and nothing too terrible occurs… though this is a book aimed at younger readers, so I guess that can be forgiven. The kids throw in some witty one-liners and impress Bruce and his nemeses.

Future issues are sure to be more action-packed, and maybe they’ll even feature more fun cameos from both the Batman and Scooby-Doo universes. As Ra’s says to Velma, “Patience”.

Batman and Superman Immortalised in Pewter by Sideshow Collectibles