“War of the Three Kingdoms” 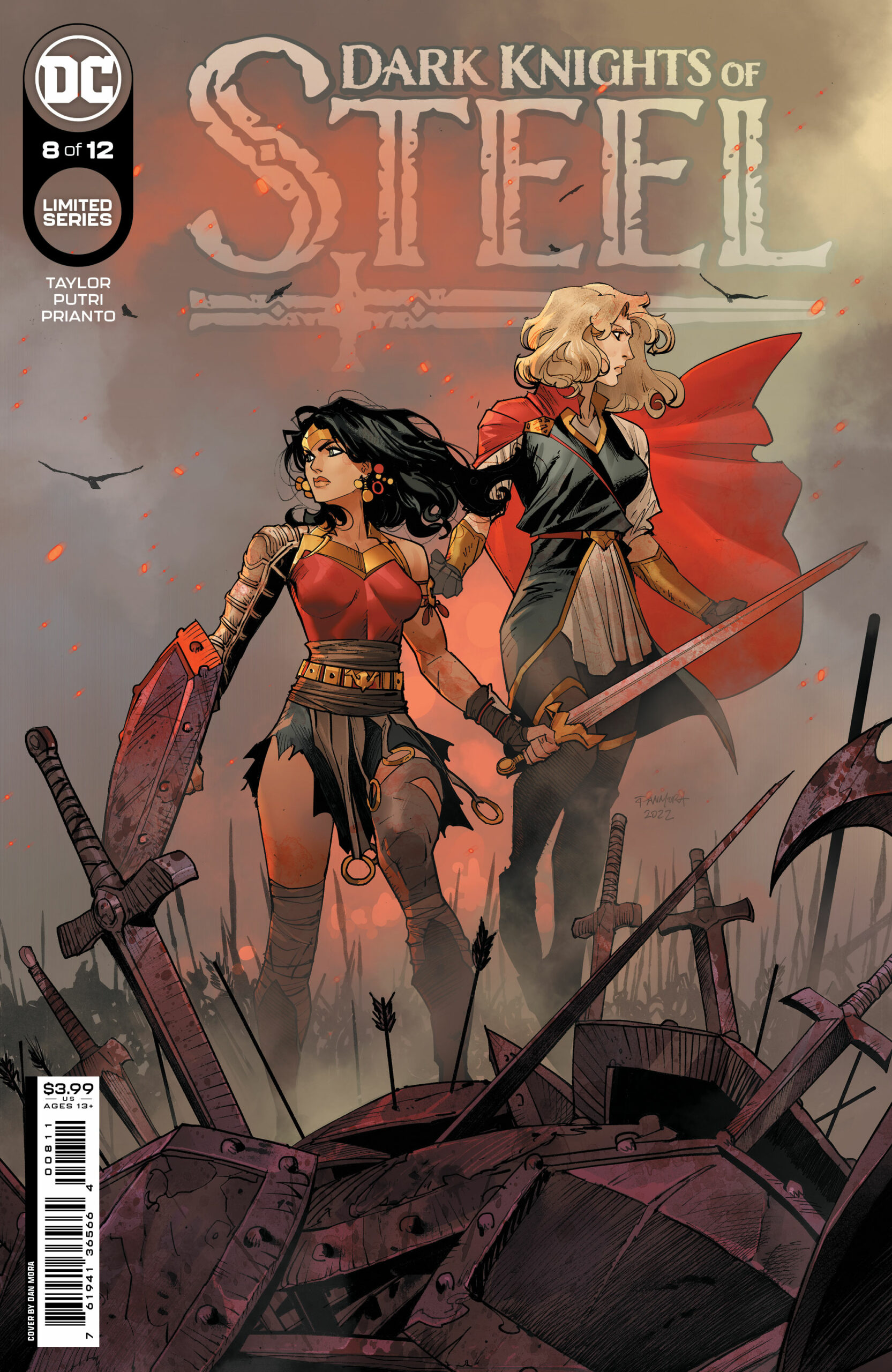 Warning: there are minor spoilers in this review

It’s back! After a massive break, into the depths we go with Dark Knights of Steel #8 as they add more fuel to the flames. There will be many spoils of war here as there are many villains in this series, as well as a lot of grey in the moral codes of the heroes we’re so familiar with. Because of this, this series gives readers a beautiful and jarring Elseworld. This issue in is the center of the build-up as the three kingdoms are heading into war. As we have so many meta-humans on each side, world destruction could easily be the final outcome. 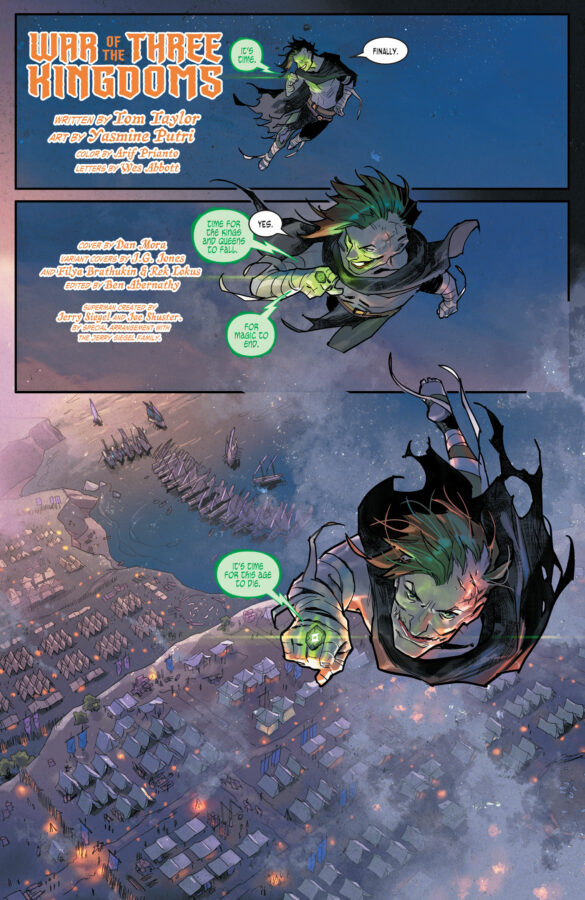 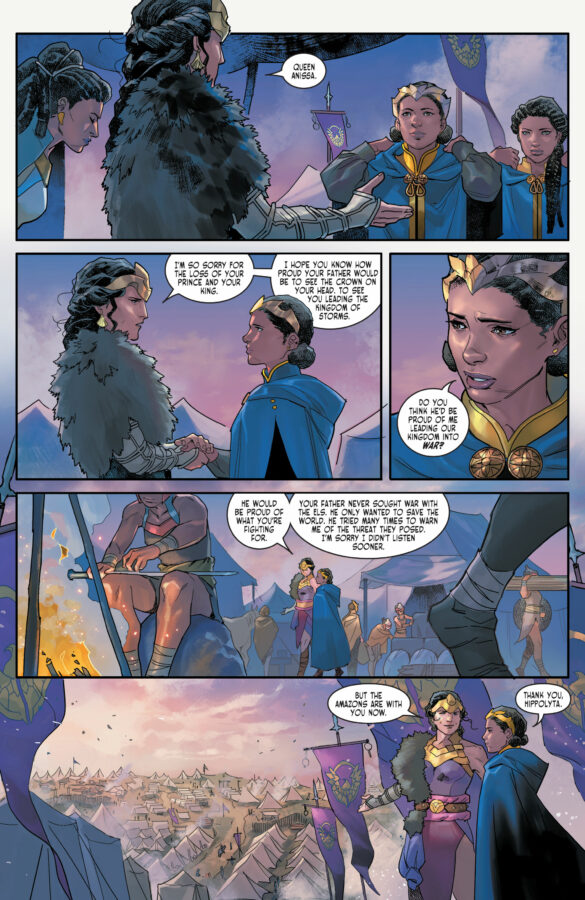 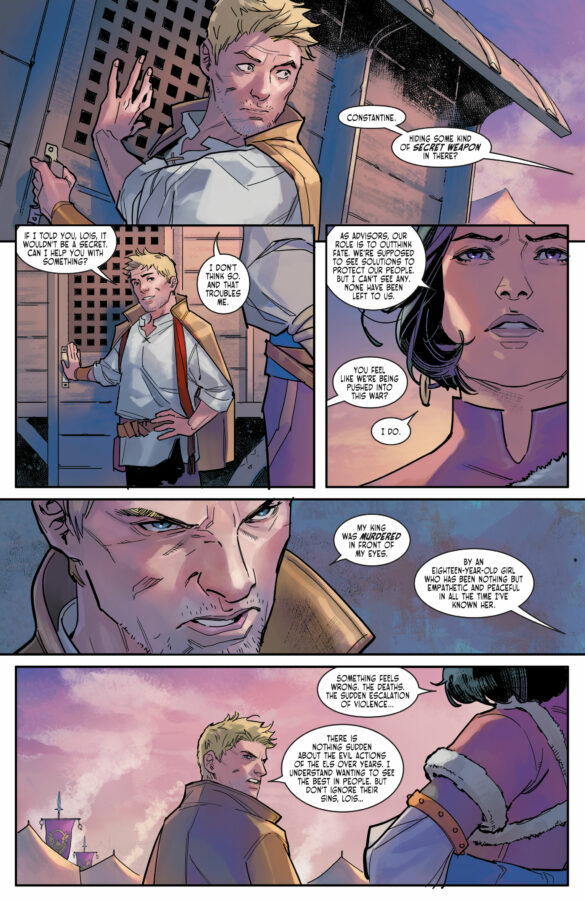 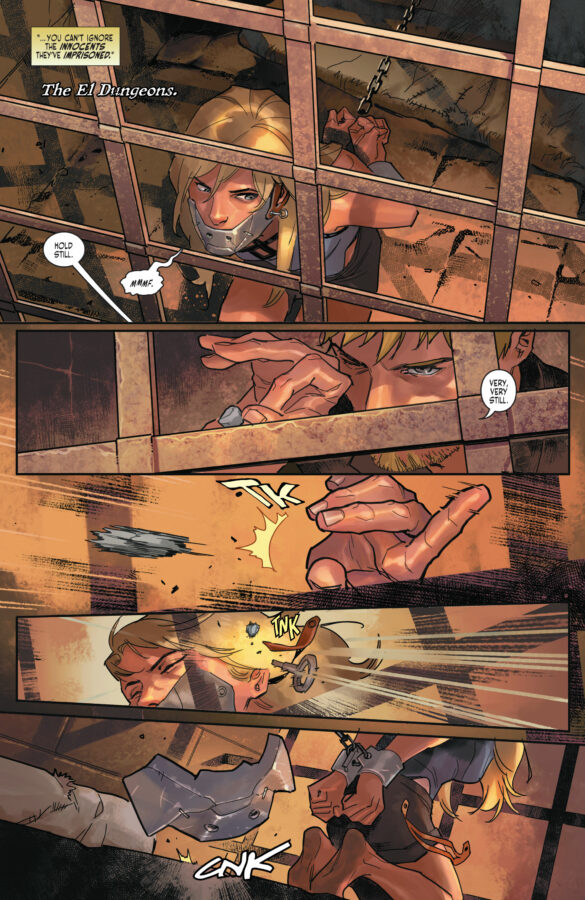 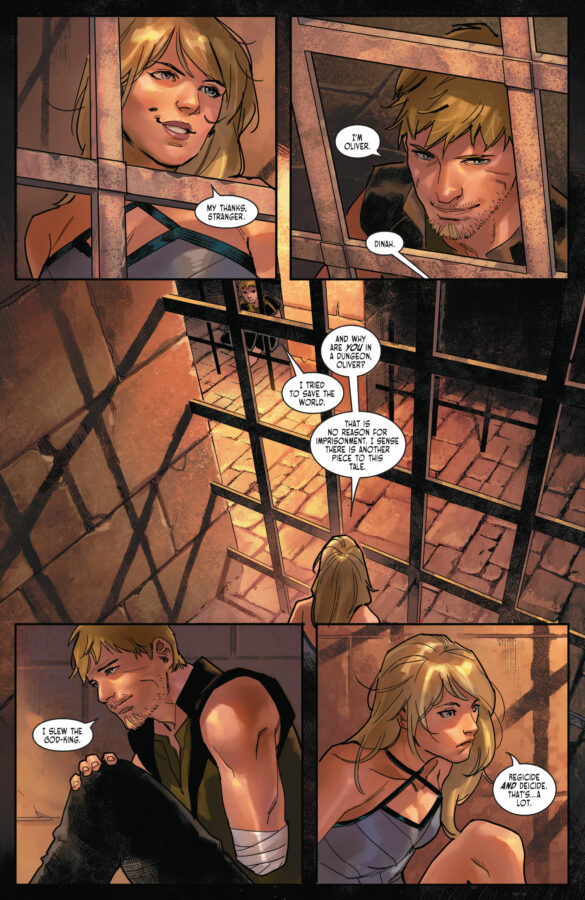 Each issue has become more intense. I feel each move the three Kingdoms makes, and it has my jaw dropping even lower. I’m so used to having these characters give up their world for the mere safety of a few people, so seeing each of them be reckless, vengeful, and violent against non-villains has been an enthralling shock. We love Alan Moore’s famous line “All it takes is one bad day to reduce the sanest man alive to lunacy.” This series shows how these characters turn out when they face those bad days.

Many of the characters that we’ve met throughout the series pop up in Dark Knights of Steel #8, which I really enjoyed! We see Constantine, Joker, Harley, Dinah, and Olliver Queen, to name a few. The series pulls in great fantasy elements, a-la Game of Thrones, something we’ve said in previous reviews. Just as there was an artistic and well-placed build-up before the huge war in the HBO series, Tom Taylor writes in one of these in Dark Knights of Steel.

Issue #8 fills more knowledge gaps that have been introduced throughout the series, so we get a more solid idea of who’s on whose side. For example, we have Ivy with the Els, and Constatine on the side of the Storms. Dinah and Oliver finally meet during their imprisonment, and what a meet-cute! I jest, but it’s actually a very pleasant interaction, as I was wondering how Dinah was doing in the cellar. Hopefully, their partnership and knowledge will bring us some excellent battles.

I’m so glad see Yasmine Putri again! I love her style, it’s so gorgeous and beautiful. The faces are full of so much expression and emotion, making the kiss between Ivy and Harley well-placed and beautifully illustrated. The colors and feelings in it are wonderful. Every action scene, from the vines to the flicks, to the murders, are depicted with huge talent. Wonder Woman flies using a Pegasus, and it’s majestic.

The colors by Arif Prianto are fantastic as well, Putri and Prianto are an excellent combination. The action is brought to life with their work and panel layouts, and I love seeing them on the creative team. 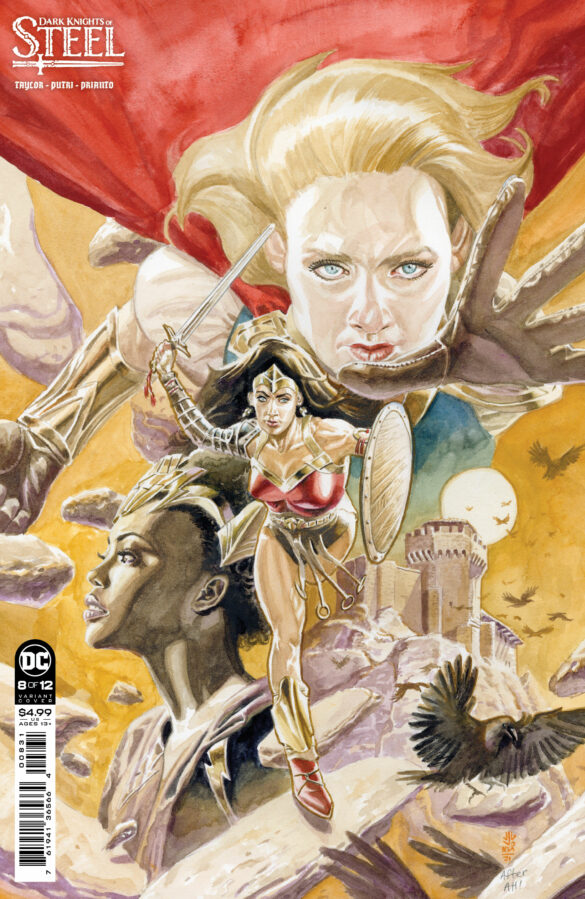 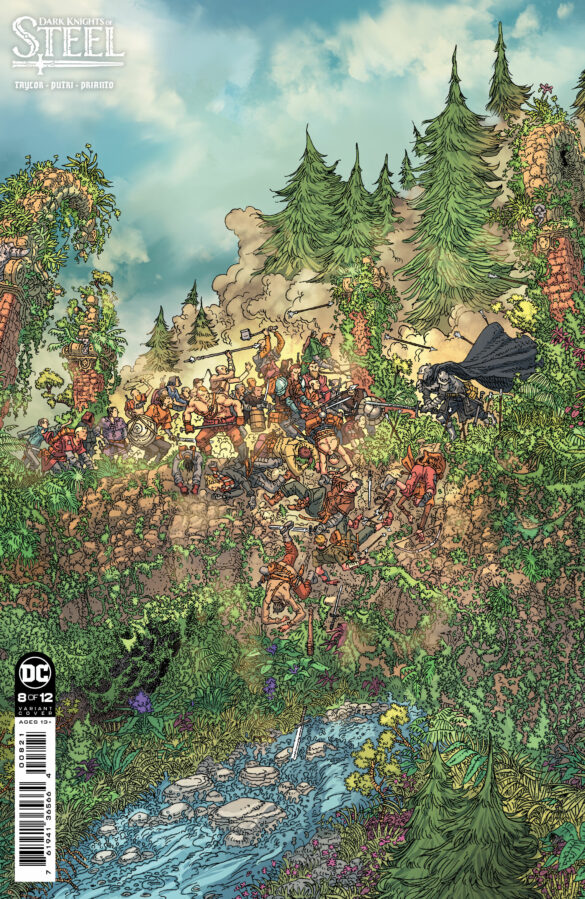 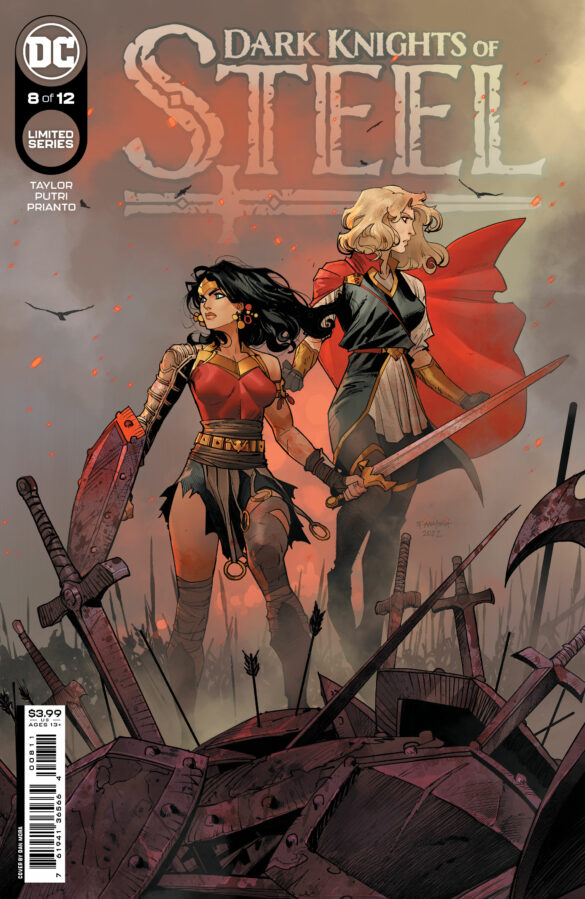 The art in the prison scene in this issue is also captivating. That’s a difficult place to make look eye-catching. Everyone would normally imagine rats and grey flooring, but no… the creative team adds highlights of brown and gold, implying rust or copper, which makes it an inviting scene to read. In addition, Dinah and Ollie are very eye-catching.

My complaint since issue #6 has the same, this series is coming out so slowly it’s agonizing at times. I think we’re now a year in and we’re only just past halfway done, when I expected the series to be completed by now. It’s alright, we’re getting there… slowly but surely. However, if you’re someone a bit impatient like me, then I suggest waiting for the full collection to come out. Also, if you’re like me, then you’ll want the next issue right now! The art’s beautiful and the story pulls you in every time. Issue #8 gave a good jolt to the proceedings, and I’m absolutely looking forward to the next one.

This is a great series to collect.