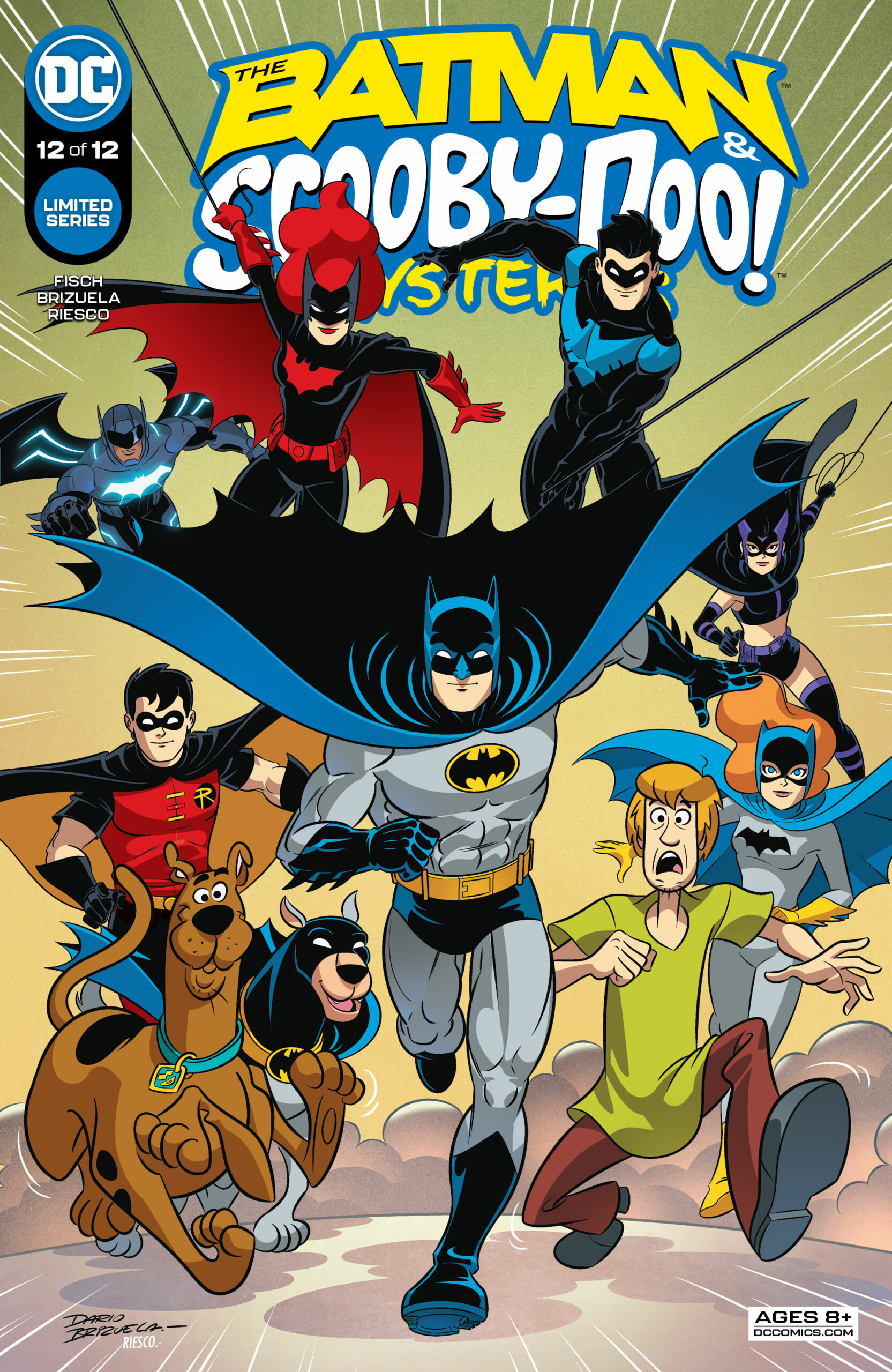 It’s finale time! That’s right, after several months of publication, The Batman & Scooby-Doo Mysteries #12 wraps up the series nicely by packing in as many heroes and villains as possible into the finale. A few key favorites of mine returned to the pages of the comic, as well as a few DC classic characters that hadn’t yet been involved.

The entire series wrapped up with this issue and was completed in celebration of the 50th anniversary of the first Batman and Scooby-Doo team-up. The whole issue is delightful, if uncomplicated. Nothing super plot-related happened in this issue, but we still recommend reading about previous issues to understand the whole story.

One of my favorite parts of the book was the fact that the villains were minding their own business and hosting a supervillain convention outside of Gotham City. Many of the baddies famously don’t get along with each other, but evil can unite people. This odd conglomeration of villainy makes the Mystery Gang stand out massively, and they’re immediately caught, of course. This opportune “haunting” of the hotel makes it seem like Scooby’s gang is going to be overwhelmed and captured. However, Batman calls in the extended Bat-Family, allowing for many panels to display the various villains in the con’s attendance.

Keep in mind, there were a ton of villains. Some of them were recognizable by costume or because they were mentioned by name, but there are many I’m sure that I missed! Featured favorites of mine were numerous, but I’ll try and condense the list. Calendar Man and Zodiac Master both try to flirt with Poison Ivy. The Riddler laughed at Cluemaster and Signalman’s lame attempts at puzzles (although he couldn’t deny their style!). Two-Face and Harley Quinn both dealt with noob villains while trying to form alliances with them, and my personal favorite involved Mr. Polka Dot (aka Polka-Dot Man) getting his powers thwarted by Crazy Quilt!

With so many villains in these pages, one would wonder how the good guys could be successful! Every member of the Bat-Family came out of the woodwork for this one.

If you thought the list of villains was long, hold on to your hat! An ingenious Bat-Signal crafted by Daphne summons the Bat Clan to the spooky hotel. Robin was already fighting baddies by Batman’s side, but his brothers, Nightwing and Red Hood join the cavalry. Batgirl, Huntress, and Batwoman also join the fight, bringing some awesome girl power to the page. Even Catwoman shows up, with several villains questioning her allegiance to the Bats.

My personal favorites of the Bat-Family, however, had to be the animals. Ace the Bat-Hound returned and teamed up with Scooby-Doo to stop the Eraser from getting away. Also, a hero I’d never heard of, Bat Cow, took out the Penguin and the Joker (truly a sentence I never thought I’d write).

Of course, the non-superheroes don’t stand around like damsels in distress. Mystery Inc. still contributes to the fight, and even Alfred gets to join in the action. Still, it all goes to show that heroics work well when they’re a family affair.

What is a Legacy?

Loyal review readers know that I’ve had some difficulties with Sholly Fisch-written issues of this comic. I am happy to say that this chapter was probably his best one. Don’t get me wrong, the book wasn’t perfect, but I finally got the female hero butt-kicking I hoped for, though in a clearly cringeworthy way (think Marvel’s Avengers: Endgame “feminist” moment). Many characters were shown but not introduced in any way. Different Bat Squads were thrown in almost randomly and confused me immensely… but I digress.

What I felt excelled in this issue were the jokes! Not many comic books deliver knee-slapping humor, but I audibly laughed at several moments throughout this comic. My humorous tastes align with either the simple and obvious, or complicated and thought-provoking. This issue’s tended towards the former. Shaggy encouraging Condiment King to use his toppings for good rather than evil? Villains with opposite powers accidentally wiping each other out, a freaking cow whose fur has a bat shape taking on two iconic Batman villains? Kinda priceless.

Oh, and I forgot to mention, many of my questions from throughout the series were indirectly answered. It was never quite clear how or why the heroes would conveniently be able to gather to stop villains or how the different bad guys were able to get organized and terrorize citizens so easily. It turns out, at least in this issue, that Bat-Mite was behind some of the convenient appearances. This doesn’t necessarily explain some of the happenings in previous chapters, but it’s at least some rest to my speculative mind.

Well, it’s over! The Batman & Scooby-Doo Mysteries #12 is the end of a pretty good series. There were plenty of ups and downs, but this was a fun and simple comic for fans to enjoy. Whether it was the references and callbacks to previous adventures, jokes breaking the fourth wall or the simple joy of a talking dog, the series had story components for any reader to enjoy.

This obviously won’t be the last time we see Mystery Inc. and Batman teaming up, but it’s always a little bit sad when something ends. It probably won’t be for a long time, but perhaps another cooperative series will occur in comic form. As Batman says to Velma in the closing panels of the comic:

If our collective experience has proven anything, it’s that no matter how many cases we solve… there are always more mysteries to be found.