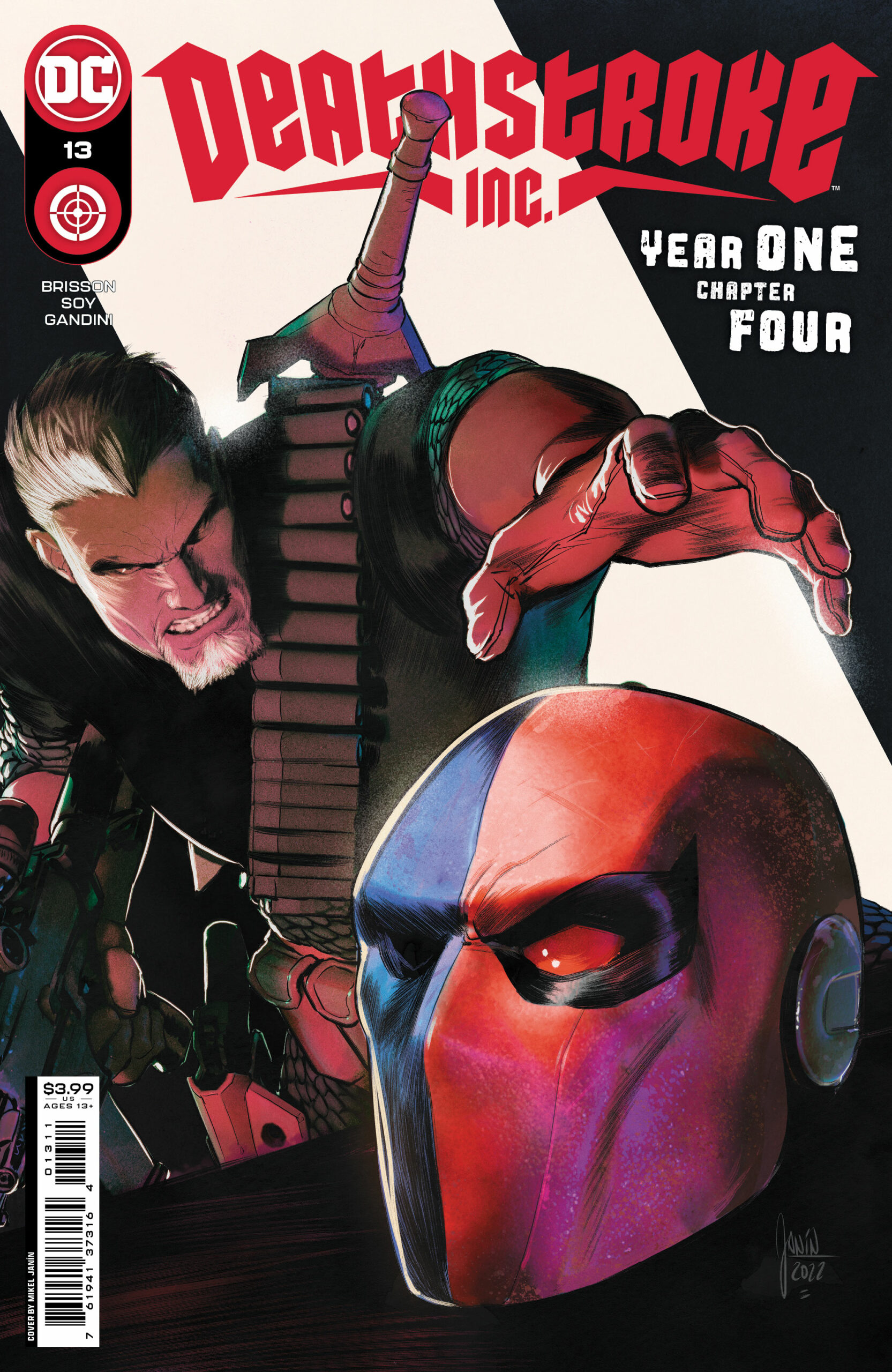 “Year One” continues in Deathstroke Inc. #13! This issue sees more of the typical behavior that we’d expect from Slade, as he tries to regroup after his previous failures on his first mission in orange and black.

There might not be as much action as last month’s issue to unpack, but there is news and speculation in abundance.

Be sure to catch up on previous issues to avoid spoilers below!

Deathstroke Inc. #13 was nowhere near as pumped and fast paced as its predecessor. Sure, Slade gets to terrify a bunch of people while running around the city fully naked (thank goodness for generous shading, right?), but this doesn’t compare much to Slade and Green Arrow meeting for the first time. 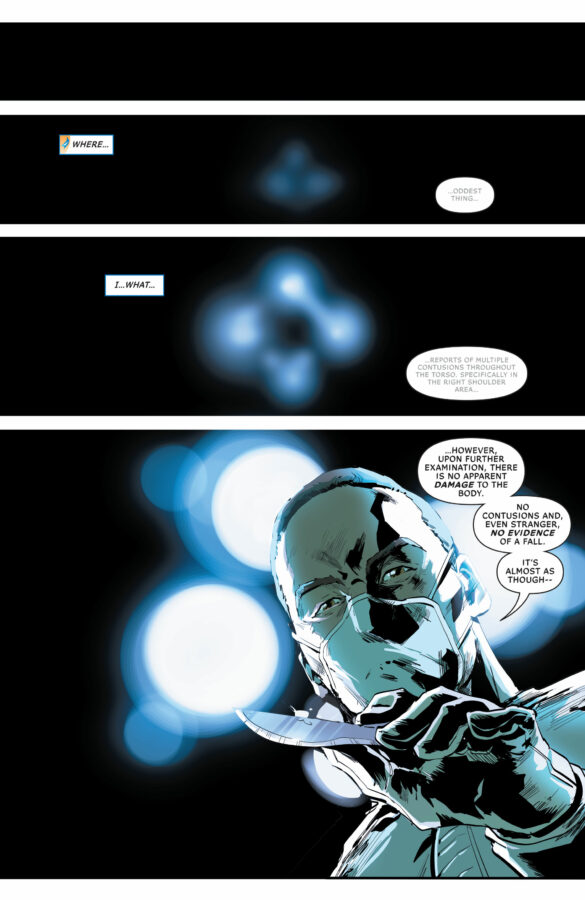 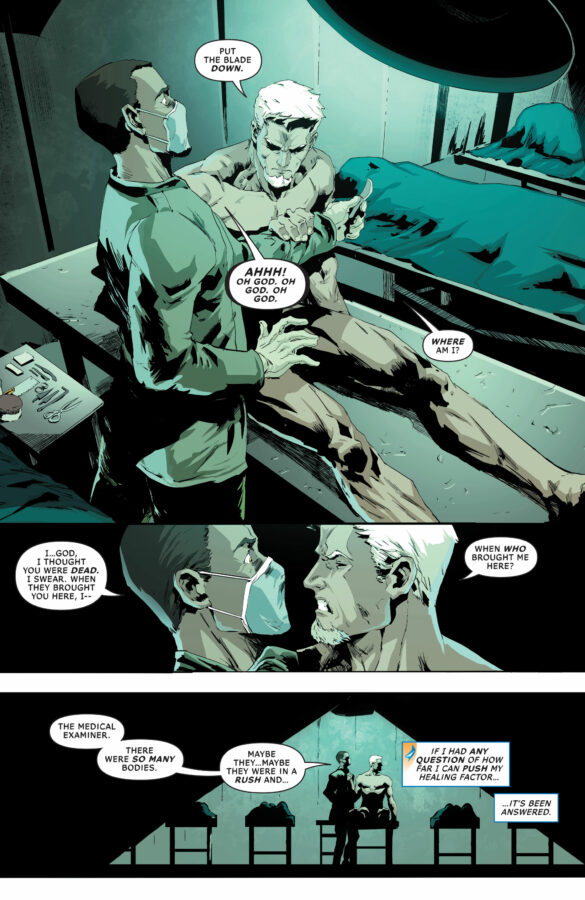 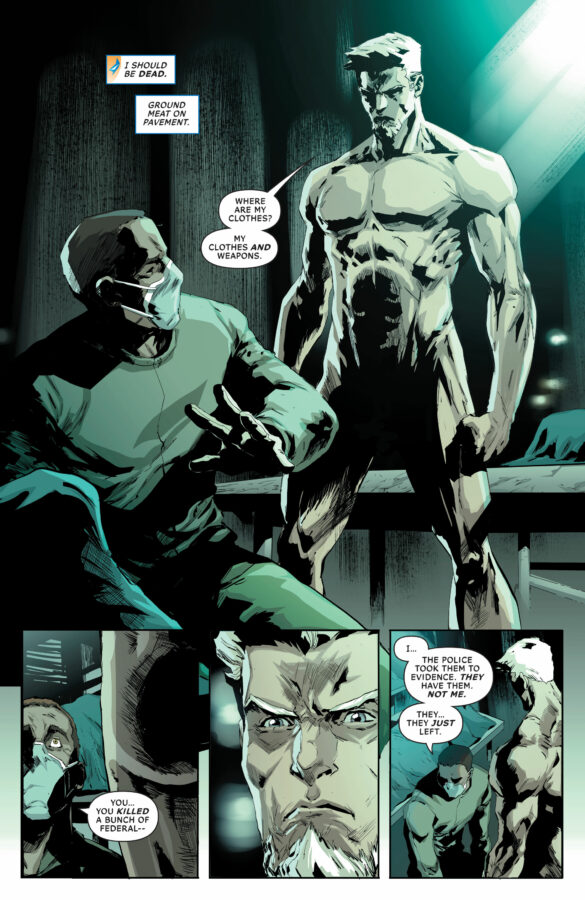 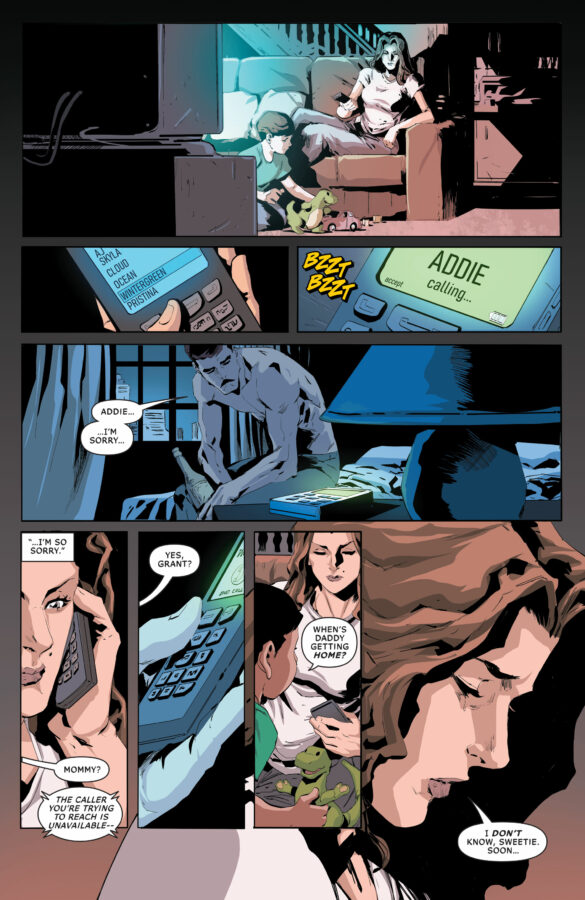 Luckily, a lack of action does mean less death caused by Slade. He still… maims people pretty bad, but they’ll be able to walk it off (eventually). This issue is much quieter than any other in the current arc. Onomatopoeia is only featured as coming from machines behaving normally or getting destroyed. It’s easy enough to follow, but not necessarily interesting.

The one bit that really interested me was the progression of colors at the beginning of this issue. Slade awakens in a medical compound of some sort and everything’s in shades of green. As Slade breaks free and begins to confront the police, blue takes over, although warm colors also join the scheme. The warmest pages of color, especially in this segment, show Addie and Grant, Slade’s family. It isn’t until Slade gets back to Wintergreen that the colors appear properly, starting with purple and then full color.

The colors imply that Slade loses his humanity without his family and friends (if Wintergreen can be considered a friend). Slade’s more likely to do the right thing and not be a mission-minded mercenary machine when he connects to his heart. This is even more apparent when the colors become gloomy and primarily green once more, after Slade resumes his mission and hangs up his call with Addie.

These issues have been really great reading, that’s undeniable. Time for some complaints, though. The previous issue ended with what appears to be Slade’s evident and rather violent death. He fell ten stories with arrows going through him.

However, we know that this arc takes place as a flashback, so Slade has to live, in order to have more kids, fight the Teen Titans, and lose most of his humanity. Therefore, it was exceedingly obvious that Slade was going to survive his first standoff with Green Arrow.

You can create stories this way, but the suspense is kind of ruined when you know that plot armor is coming into play. One of my biggest pet peeves as a reader is when you know that certain characters have to survive absolutely ridiculous and dangerous situations because they’re essential to the story.

While I’ve encountered some surprises in my time, you can usually predict who’s going to be safe from harm, just because of their role. More intrigue could be garnered by giving hints as to another Green Arrow appearance or something of that nature, since that isn’t guaranteed.

I’ve mentioned this previously, but one of the best things about the current arc is the consistent creative team putting the issues together. No matter how you feel about the story’s direction, artistic choices, or any other components, these past few arcs have followed the same vein. This is only possible by having the same team continue to work on the series.

Previous arcs did not have carry over of the creative teams, even in the mega-crossovers between Robin, Batman, and Deathstroke Inc. Joshua Williamson wrote the stories involved in “Shadow War” for Robin and Deathstroke Inc., but there were few other connected dots on that project. No matter why this is, it’s refreshing to have the tone of “Year One” feel the same from issue to issue.

I also want to continue to congratulate all the creators involved in this story. In my opinion, “Year One” has been truly compelling. Building a morally grey hero is complicated, especially when canon for the character already exists. However, these issues have been excellent. I’m honestly surprised that “Deathstroke: Year One” wasn’t produced just as a Slade Wilson origin story, but I’m enjoying the ride no matter what. 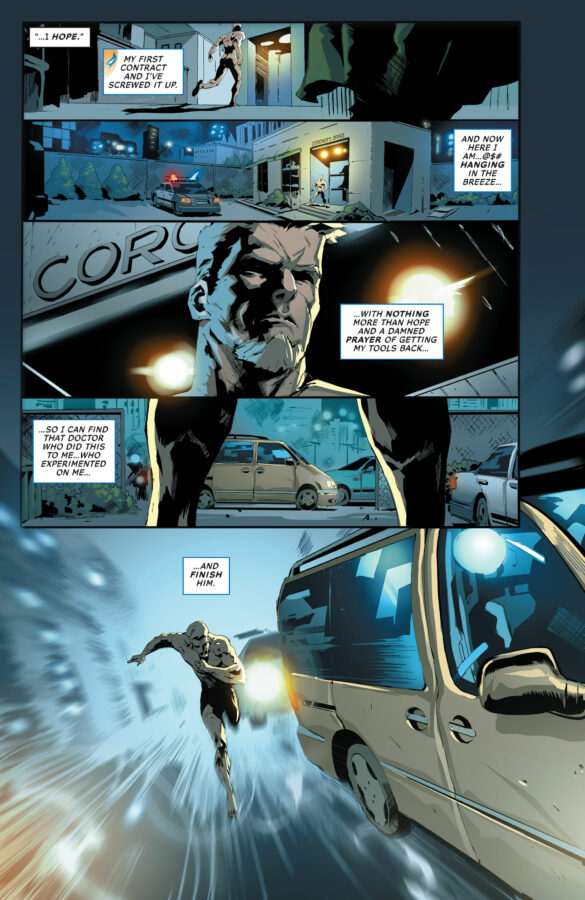 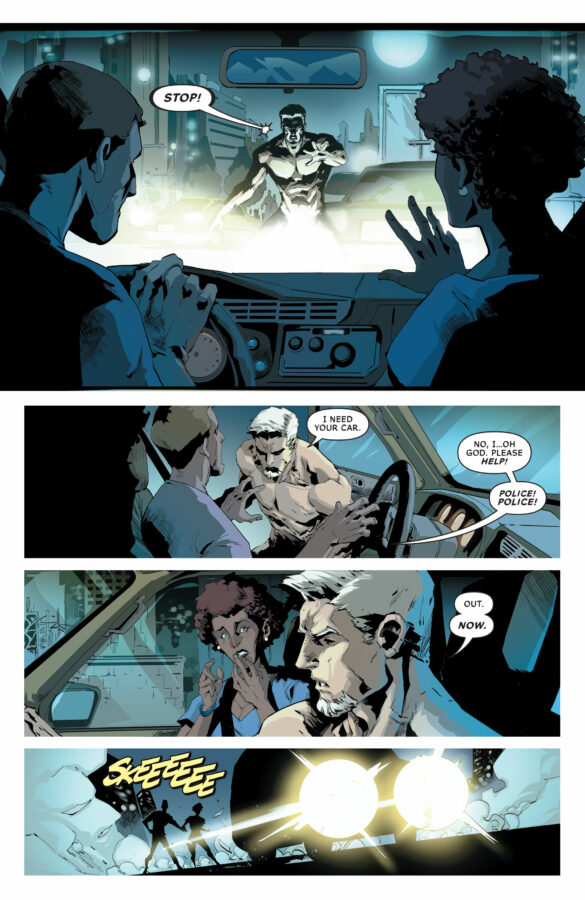 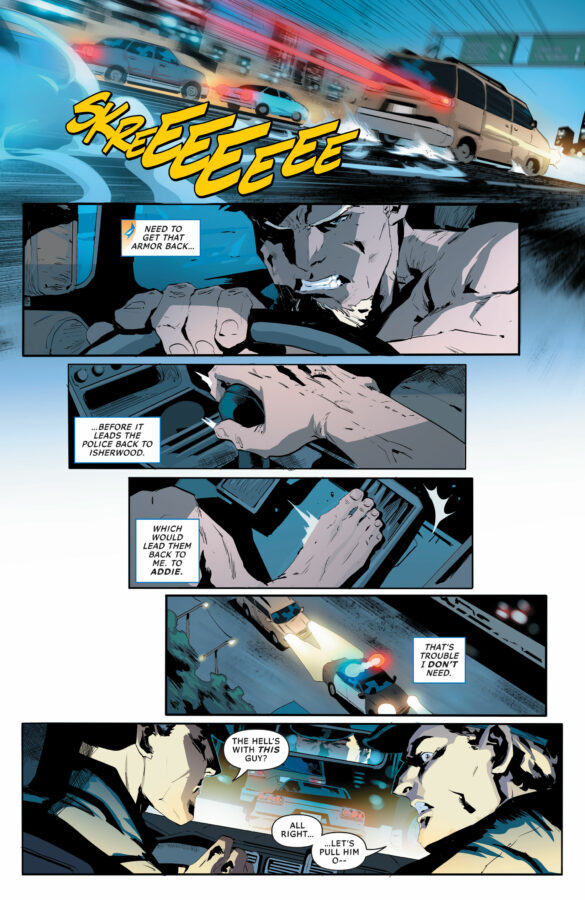 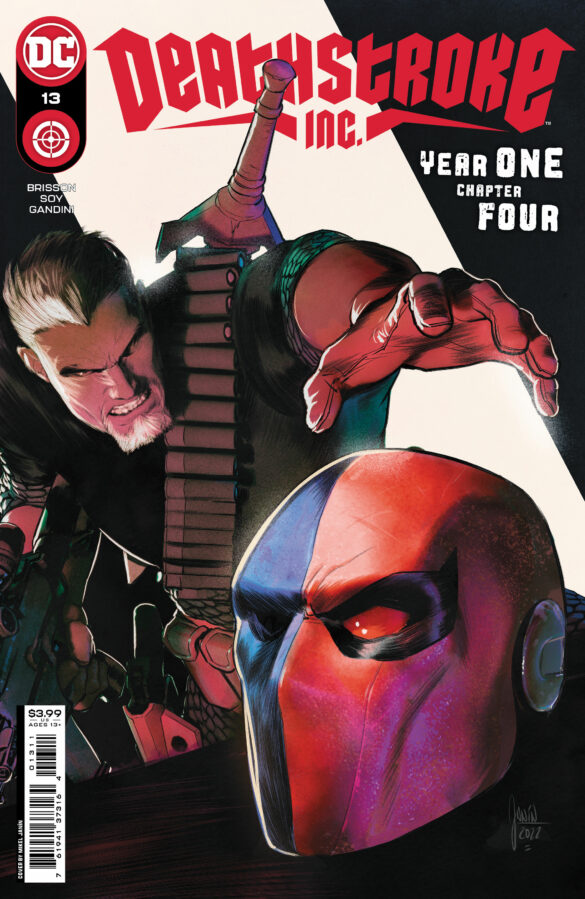 Deathstroke Inc. #13 slowed down a lot. This is common with transitional issues, but it’s still a bit disappointing. As far as transitional chapters go however, this was pretty top tier. Addie finally gets to talk to Slade and the ending shows that no matter what he says, Deathstroke is affected. Perhaps the news of his newest child will change Slade for the better?

I wish we didn’t already know the answers to a lot of the questions we have, as readers. We’ve been told from the beginning that this is Slade’s first big mission. Revenge suits him and he’s the best at his job, so I won’t be surprised if he’s successful by the next issue. We also know that people who hire mercenaries, especially for the government, can be pretty slimy, so I also won’t be shocked if Deathstroke and Wintergreen won’t get the payday they’re expecting.

Also, as much as this arc has been a fun flashback, I’m incredibly curious to see where the series goes. It’s been just under a year since Deathstroke Inc.’s first issue was released and we’ve come a long way from scary bee people and a team up with Black Canary, The question now is, where are we and Slade headed after “First Year” is over?

Do you have any thoughts or theories? Please comment below!