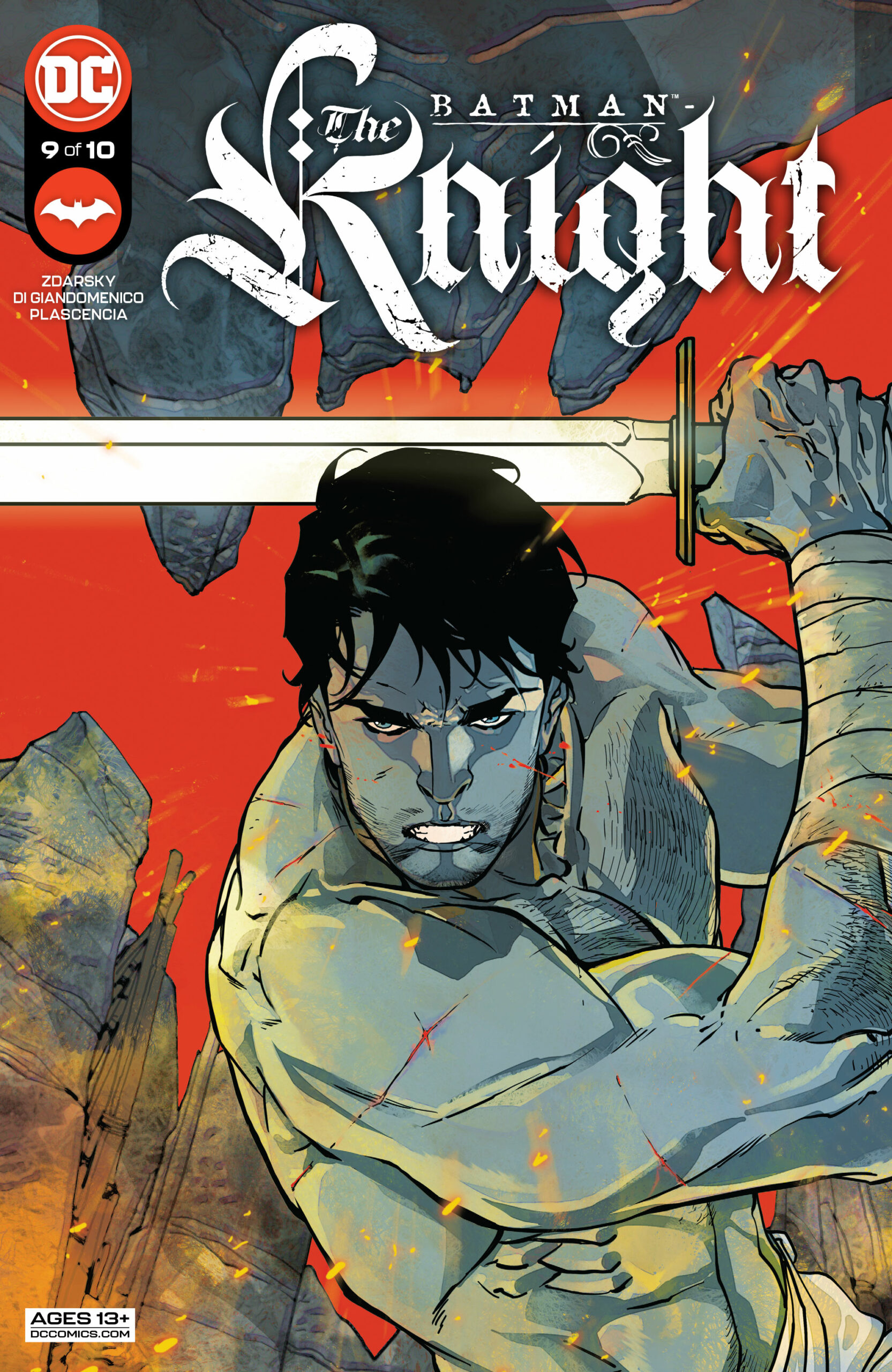 Batman: The Knight #9 turns up the heat, in a series that was already red hot. Enter Ra’s Al Ghul, Talia, and The League Of Assassins.

Chip Zdarsky is blowing my mind. I have a Batman collection that sporadically goes back to the Golden Age of comics, but haven’t missed a single issue of any Batman title since 1985. I wouldn’t call myself an authority, but I definitely know more about the Dark Knight and his history than the average comic book reader. I’ve stated, in previous reviews, that I didn’t really need, or particularly want, another look at batman’s formative years. This series has slowly, but definitively changed my mind. 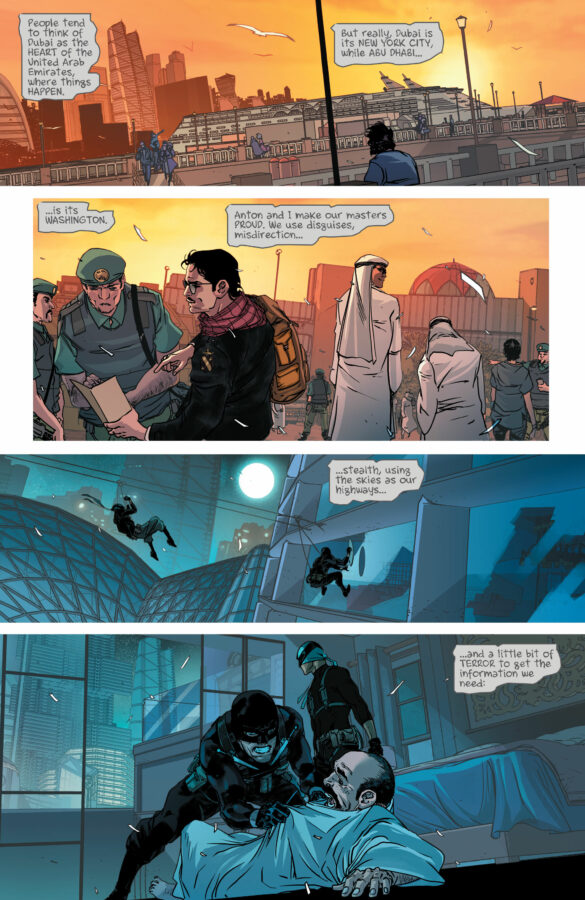 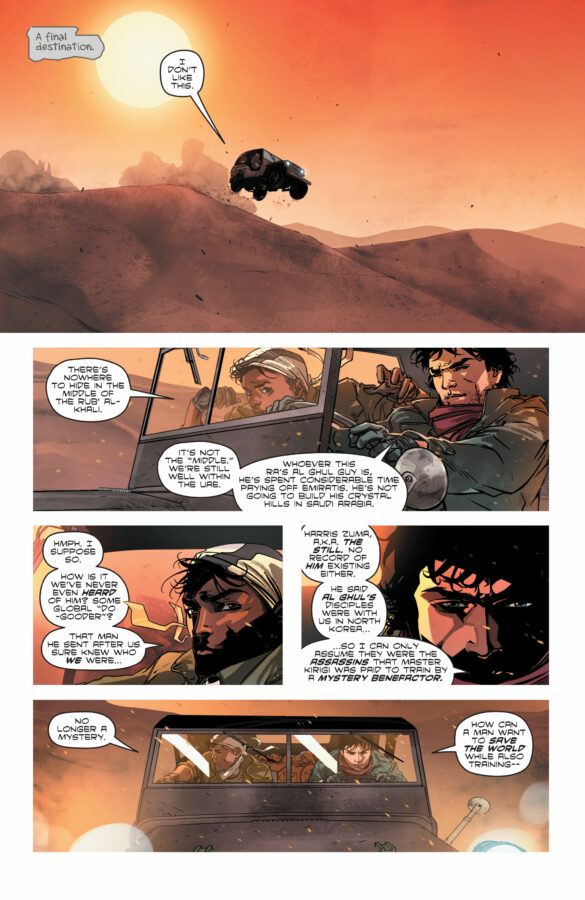 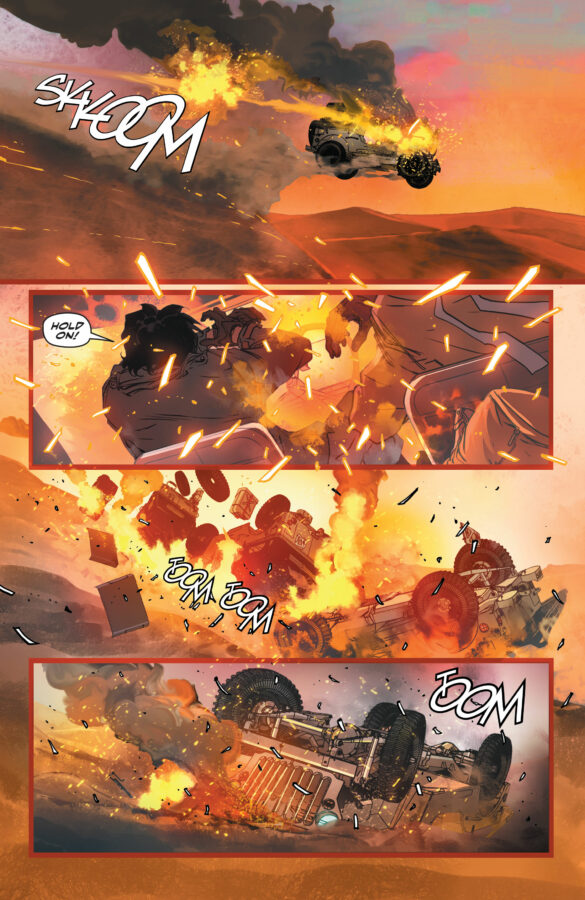 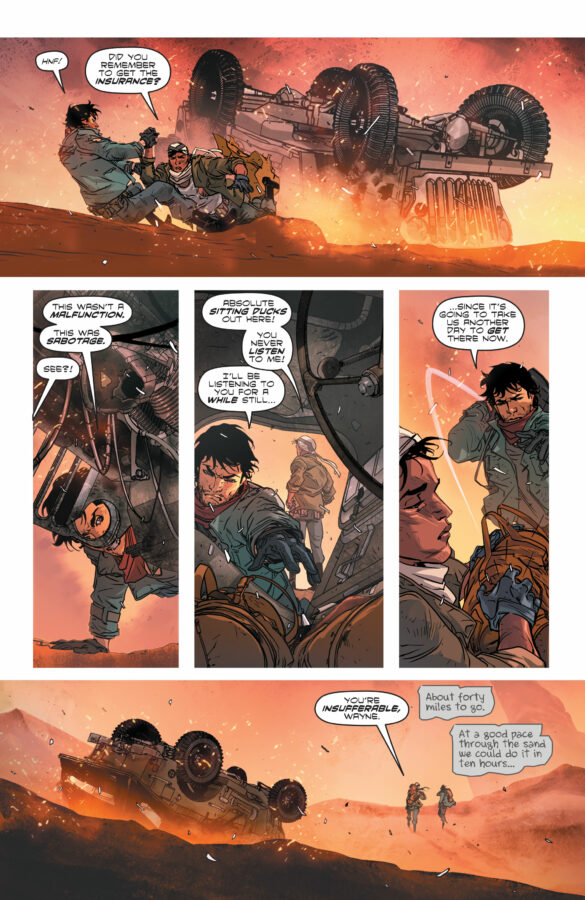 The years that Bruce Wayne spent abroad training, helped forge the man into the greatest crime-fighter the world has ever known. This ten-issue series has shed more light on these years than any that have come before. Batman: The Knight #9 shows us a completely pivotal milestone, and one that has serious implications.

Up until now Mr. Zdarsky has created new situations, characters and events, and whenever he’s brought in classic characters he’s expanded their roles, he’s done so in a way that respects the work of previous creators and doesn’t ret-con or re-write favorite stories from years gone by. In this issue we learn more about Anton, but for eagle-eyed readers and those who follow the main Batman title, this was less of a “What a surprise” moment, and more of a “Yes… I knew it!” one. I loved that part. What’s a little more problematic, for me at least, is bringing Ra’s, Talia, and The League in at this early point in Bruce’s life and training.

While I do like, or sometimes love, some of Batman’s adventures on the silver screen, I far prefer and have always been more invested in the source material. I frequently get frustrated when characters are introduced out of order. Of course, it can frequently be forgiven for the purposes of dramatization and storytelling. What I don’t like is the way that fans sometimes assume that, because it happened that way in the movies, it happened that way in the comics too.

Historically, it’s been firmly established that Bruce Wayne first met Ra’s when Dick Grayson was still Robin, and had left Wayne Manor to attend university. Christopher Nolan’s Batman Begins portrayed Ra’s and The League of Assassins as figures from Bruce’s past, and some of the agents who helped with his martial arts training. I think (hope) that what Chip Zdarsky’s trying to do with this story is reconcile both versions of the story, so new fans and old cynics – like myself – can learn to get along.

Shot Out Of The Canon

What I’m looking forward to is seeing how this story will end, to ensure that somehow, Bruce’s “first” meeting with Ra’s and company, as a man and Batman, remains intact. If this new take becomes Bruce’s first encounter with Talia and the League of Assassins, then history will be re-written, and not in a way I would like, or even remotely approve of. While that’s simply the opinion of one sole voice in the wilderness, it will taint what has become one of my favorite new Batman stories of recent years.

However, I know that Zdarsky’s an excellent writer, and I’m sure that he’ll find some way of satisfying his new readership as well as fussy old fuddy-duddies, like me.

In Chip we trust. 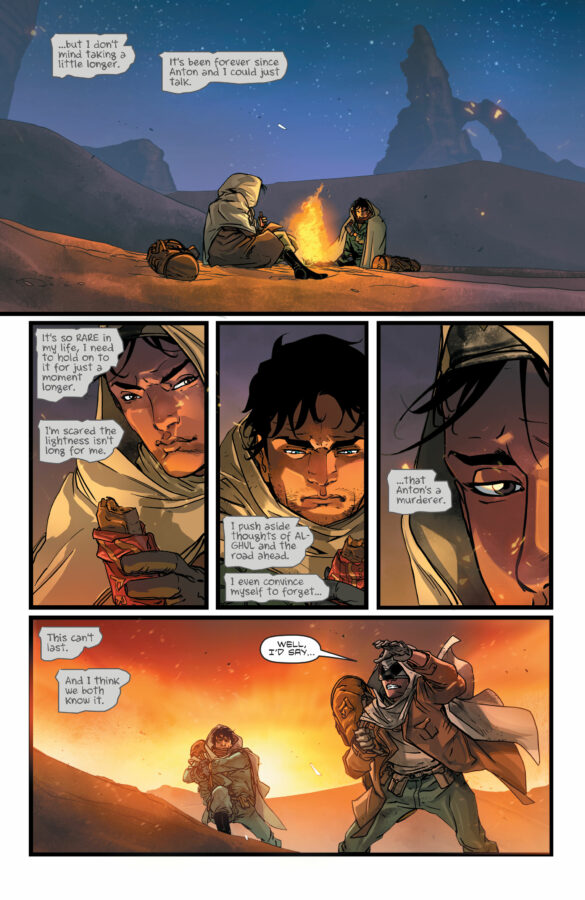 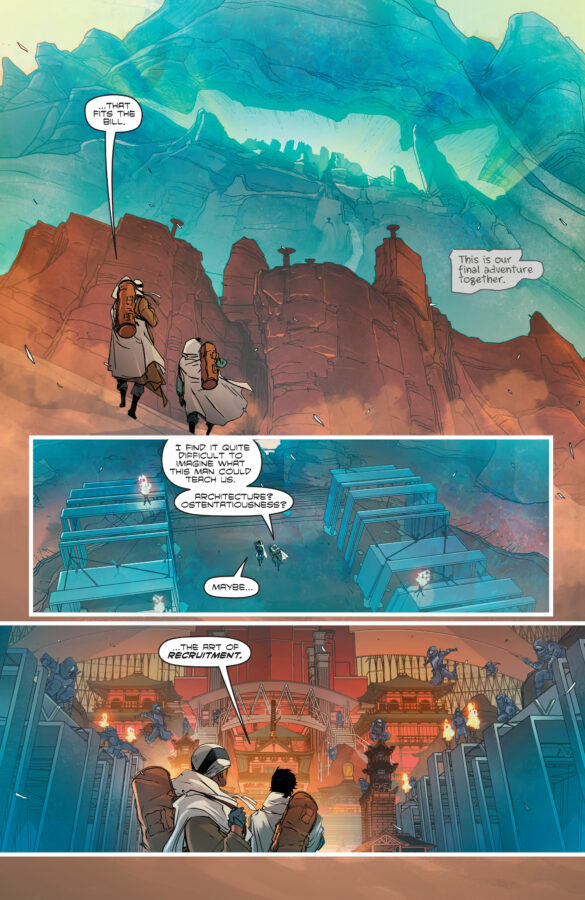 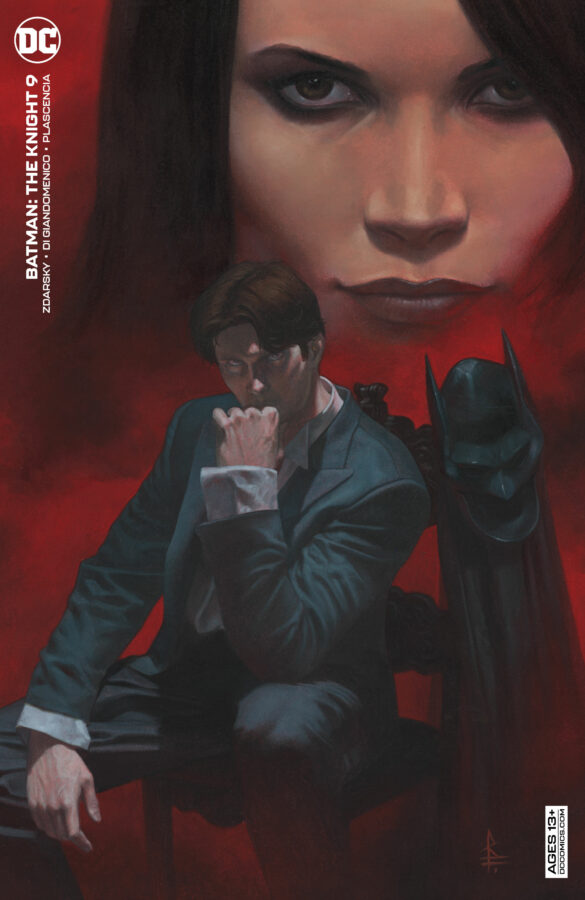 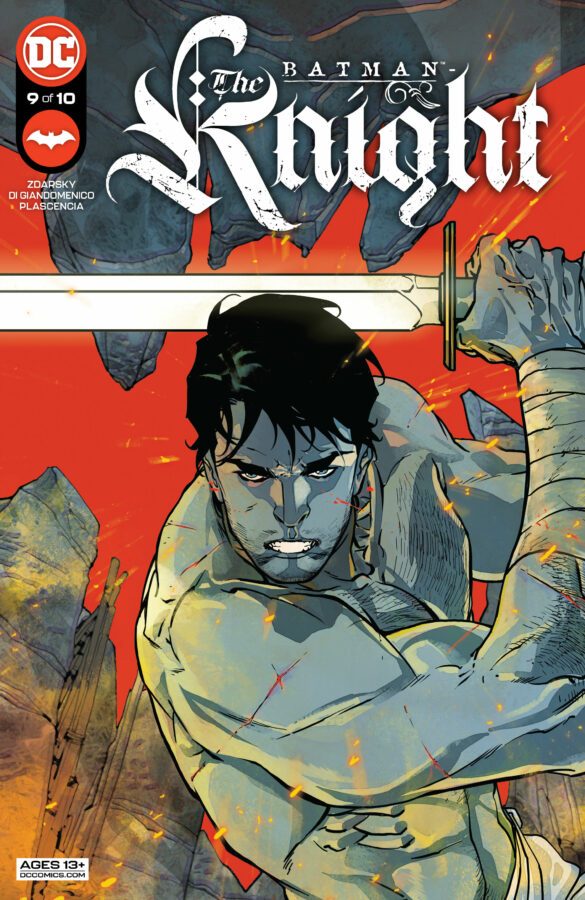 When it comes to everything else in this series, the entire creative team gets a rave review. Carmine Di Giandomenico is a wonderful artist, and storyteller. Ivan Plascencia’s colors are sublime and Pat Brosseu’s always been one of my favorite letterers. This entire creative team is stellar and their work deserves to be recognized and applauded. I mean, look at the pages attached! Gorgeous.

Batman: The Knight #9 is a great read, and looks fantastic. The twist involving Anton shows how great a writer Zdarsky is, as it honors both his own talent and the work of his predecessors on the main, ongoing Batman book. While I do have concerns about Ra’s involvement with a young Bruce Wayne which wasn’t originally there, I’m still looking forward to how the story will play out.

The month-long wait for the final issue of this series is going to be a long one.