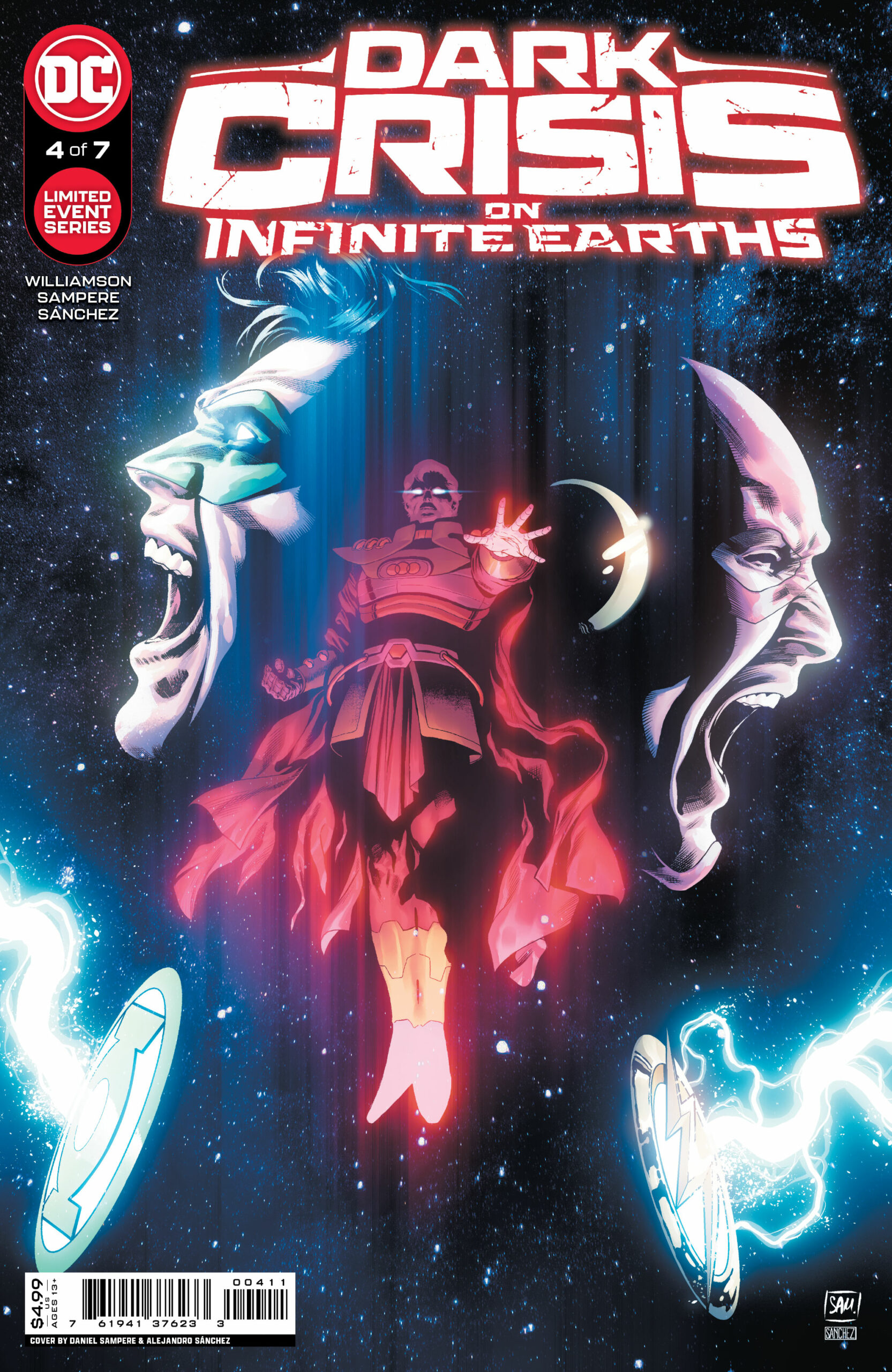 The darkness spreads, as DC’s heroes scramble to counter Pariah’s threats in this month’s Dark Crisis on Infinite Earths #4.

Meanwhile, on Earth-0, the JSA team up with the remaining heroes in order to formulate a plan to tackle Deathstroke and his army. Elsewhere, Black Adam has abandoned the Justice League in favor of joining the Legion of Doom. However, during their negotiations, the villains are ambushed by some unexpected visitors.

Re-Retconning the Retcon of the Original Retcon

Oh boy – there’s so much to unpack in this issue that my head’s spinning. Once again, it seems that DC has changed its mind concerning the nature of the Multiverse. After the events of Death Metal, DC established an Omniverse: a cosmology where there are multiple multiverses existing in a larger framework of an all-encompassing Omniverse.

As of Dark Crisis on Infinite Earths #4, the notion of the Omniverse has been thrown into question. It would appear that DC is attempting to revert to the Infinite Multiverse model that they had before the Crisis on Infinite Earths. Personally, I’m not a fan of this decision, as DC just established the Omniverse. Not to mention they tried to bring back the original multiverse in Convergence, and everyone ignored the event. 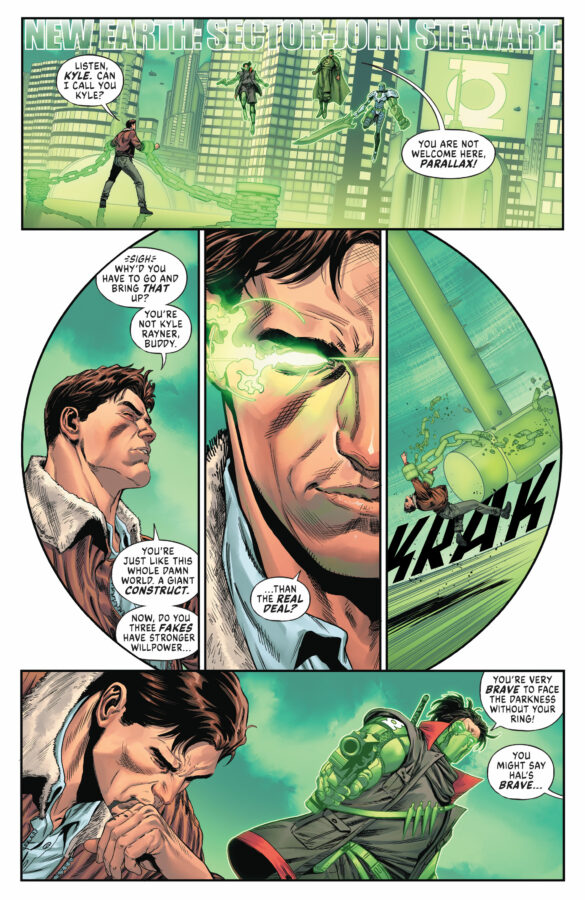 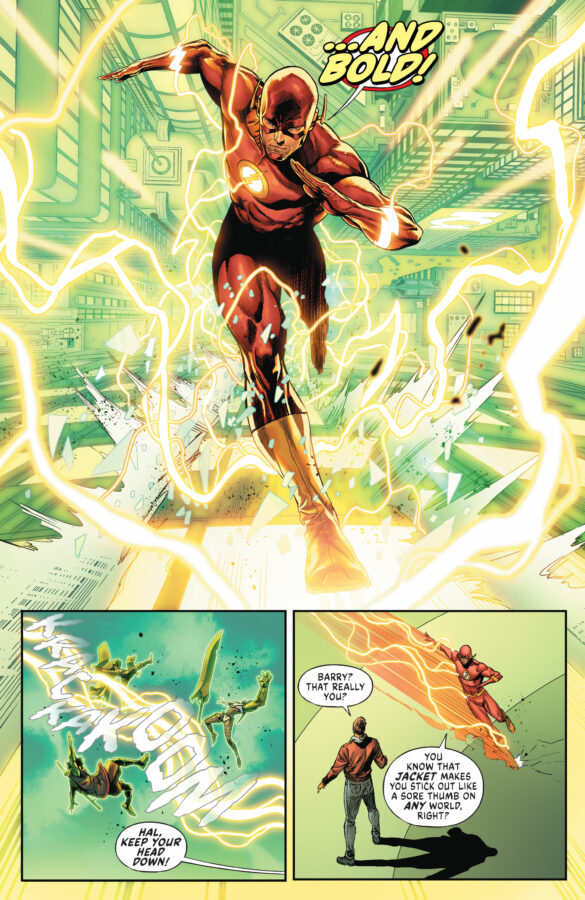 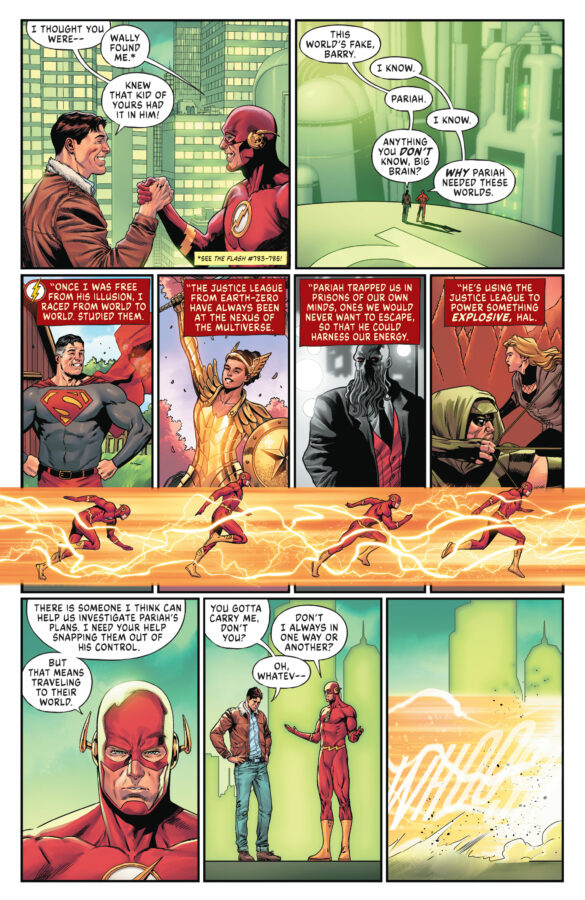 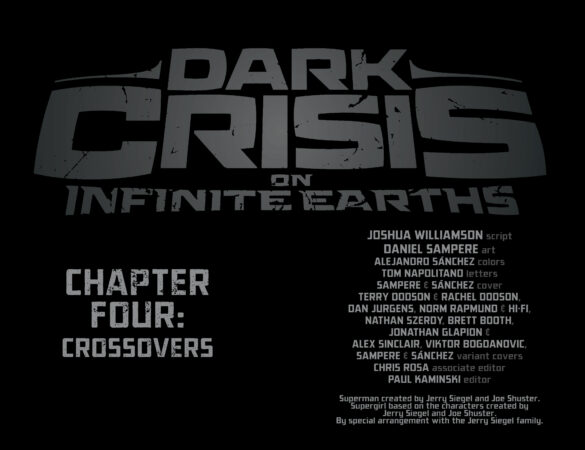 Look – Joshua Williamson’s script is great. This is a pivotal issue that raises the stakes, and he’s ratcheted up the intensity of this series fivefold in this one issue. Every storyline seems on point and compelling, I just don’t like the idea of retconning the multiverse’s cosmology once again. Granted, none of this is set in stone, and Williamson definitely left some ambiguity in the script. I’m hoping that he manages to expand on the Omniverse concept instead of blowing it up entirely.

One of the nice things about Dark Crisis on Infinite Earths #4 is Daniel Sampere’s action sequences. While much of issues 1-3 delivered a slow burn, this month’s installment is the most action-packed chapter they’ve published so far. Whether it’s seeing Hal and Barry’s escapades or watching the Legion of Doom duke it out, Sampere delivers some excellent fight sequences that are dynamic and interesting to read. Often fight sequences can subsume a plot thereby devolving into a mindless spectacle. Luckily, Williamson’s script avoids this pitfall, and Sampere is able to capitalize on this strength with some amazing sequences.

Dark Crisis on Infinite Earths #4 left me with some weird feelings. On one level, this issue was excellent in its execution. The story was well-paced, and the art was stunning. On another level, I disagree with DC’s creative direction. The tension is palpable for me, as I consider the merits of this issue. Hopefully, moving forward Williamson will provide a clear and stable explanation for DC’s multiverse. Maybe then this issue will go up in my estimation.

Review: Dark Knights of Steel: Tales from the Three Kingdoms